Is this the most sophisticated animatronic human face ever? 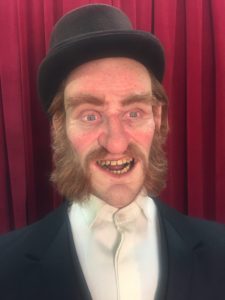 Created by themed attraction designer and animatronics creator Garner Holt Productions, Inc., the figure is a shoulders-up bust of a 19th century-style Dickensian character endowed with more than forty individual axes of motion. The character is part of what GHP calls its Living Faces of History, an all-new line of animatronic characters featuring incredibly lifelike faces with a broad range of motion and expression.

Garner Holt, GHP’s founder and president, said: “This expressive face…has more functions and realism than any animatronic head ever created. It can really replicate any expression a human face can make. I think it’s going to make waves in how we think about mechanical characters and what kind of life they can add to attractions and other experiences.”

The new figure, dubbed Alfred Jingle Machina by its creators (and voiced by veteran Disney voice-actor Bill Farmer) is the latest in the Living Face series, following a highly realistic Abraham Lincoln bust figure that premiered last July, and others. The new figure uses a similar mechanical underskull with some additional functions like a moving tongue.

All Living Faces figures are entirely electric, making them operationally silent and eliminating the requirement for a compressed air or hydraulic infrastructure. “GHP was one of the first to have electric figures in theme parks around a decade ago,” Holt said. “Electric figures are the future.  Our expressive head showcases what we can do with that technology.”  The new figure is totally self-contained and requires only a wall plug-in for power and Ethernet cable connection for input triggers to its internal show control system. The figures use of all-new multi-durometer silicone skin technology with custom magnetic attachments for exceptional realism in movement.

GHP will demonstrate the figure at this year’s Consumer Electronics Show in Las Vegas, Nevada.