Intimdator changes the landscape for thrillseekers at Carowinds and is the tallest, fastest and longest rollercoaster in the Southeastern United States. Starting with a 74-degree, 211ft first drop, riders race their way around 5,316ft (1.6km) of track at speeds up to 80 miles per hour (50km/h).

This exciting new attraction was designed by Bolliger & Mabillard (B&M), and becomes the park’s 13th rollercoaster. The addition of Intimidator compliments Carowinds already impressive line-up of world-class rides, shows and attractions, including the new Planet Snoopy, which replaces Nickelodeon Central as the park’s kids area for 2010.

“We chose B&M to supply Intimidator because of the quality of their work as well as their reliability,” says Bart Kinzel, Carowinds’ vice-president and general manager. “We asked them to make a ride like no other. We asked them to go over 200ft and make it fast – and they did! B&M delivered above expectations; we opened one month ahead of time and they were perfect to work with. I can’t say enough about this company; the final result is… wow!”

Construction of the ride went relatively smoothly, about the biggest obstacle being the removal of some rock work, which was ably carried out by Mosley Erecting of Richburg, South Carolina.

“Intimidator has all the elements which make for a great coaster,” Kinzel elaborates. “It has height, speed, twists, sharp turns and an abundance of incredible air time. We’re very excited about our new signature attraction.”

Adding to the overall ride experience on Intimidator is the use of open-air, stadium-style seating on the trains, which are fashioned to mirror Earnhardt’s 1998 RCR no. 3 Chevrolet Monte Carlo. There are three eight-car trains, each car seating four passengers. This provides the park with a guest-gobbling capacity of 1,600 passengers per hour. The seating configuration gives all riders an unobstructed view of Intimidator’s seven steep drops – one each for Earnhardt’s National Association for Stock Car Auto Racing (NASCAR) championships. As Carowinds is located in the heart of NASCAR country, the theme could not be more fitting for the park’s guests.

“We chose to Intimidator because of its association with Dale Earnhardt and the affiliation with NASCAR,” confirms Kinzel. “Earnhardt was arguably the most exciting, aggressive and skilled driver to ever race on a NASCAR track. We have a lot of racing fans in the area!”

The new ride is located in the Carowinds Plaza area of the park. Leading up to it is a heavily themed midway, complete with a victory lane and a video tribute to Earnhardt’s racing accomplishments. 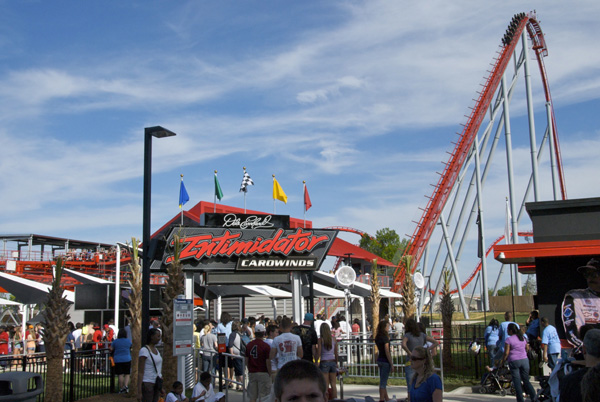 Intimidator is mayhem on rails. It’s a big, make that very big, out-and-back steel coaster with a reverse S-shaped twisting dogleg at the second hill. Unlike NASCAR drivers, who always turn left around an oval track, this dogleg turns right. Besides the 232ft first drop, Intimidator also features drops from heights of 178, 151, 105, 90, 62, 52 and 48ft before finishing with a final 360-degree spiral dip and curve. That’s more than a minute of high-speed butter-smooth fast-paced coasting with eight seat-lifting moments. That should assure Intimidator of top 10 coaster status within the year.

Kinzel is pleased with his guests’ reactions. “Intimidator is one smooth ride; it’s something everyone should do at least once. You’ll reach speeds of up to 80 miles per hour, and experience lots of airtime. Everyone I’ve talked with is surprised by the length (there’s more than a mile of track) and the smoothness of the ride.”

Kinzel has been on this coaster dozens of times. He rode for the first time in February, and continues to ride every chance he gets. He recommends sitting in the outer seats to maximise the thrill factor.

The addition of Intimidator has affected the park in many ways. “We’ve invested in landscaping, flags and painted the buildings to improve the parks’ aesthetics,” details Kinzel. “We also took out the asphalt around “Intimidator” and replaced it with pavers to give the area a polished look. Historically when you have a new attraction, you generate bigger numbers. As Intimidator is the longest, tallest and fastest coaster in the southeast, we expect our numbers to reflect it. In the few weeks that we’ve been open, we’ve had riders from almost every state. We’ve even had guests from France.”

Cedar Fair, Carowinds’ parent company, has had great success with B&M megacoasters in the past few years, adding Behemoth at Canada’s Wonderland in 2008 and Diamondback at Kings Island in 2009. Intimidator, however, is a few feet taller and longer than either of these rides. So if another operator is considering adding a similar coaster, Kinzel has this advice. “Do it! It’ll get you a lot of attention and a lot of happy riders.”