Yes, this is a coaster on steroids, lots of steroids. Intimidator 305, only the second 300ft-plus continuous circuit coaster with a traditional lift hill ever built in North America, and now the tallest and fastest rollercoaster of its type on the East Coast.

The first, Millennium Force, is at one of Kings Dominion’s sister parks in the Cedar Fair chain, Cedar Point in Ohio. The world’s tallest is Steel Dragon, a 318ft-tall ride at Nagashima Spaland in Kawana, Japan.

The new ride is Kings Dominion’s 15th rollercoaster and the largest single capital investment in the history of the Virginia park. Like the Intimidator coaster at Carowinds in North Carolina (another Cedar Fair property), Intimidator 305 owes its name to the nickname of stock car racing legend Dale Earnhardt.

Hoisted to the top of the 45-degree lift hill in a speedy 20 seconds, the ride’s 305 train drops 300ft at an 85 degree-angle, reaching a top speed of 93 mph (150km/h). It thunders along the track during its 45-second race to the finish at an average speed of 68 mph. Compare that to a “normal” coaster’s average speed of about 35 to 40 mph, and you sense the unnerving power this ride possesses. The speed is breathtaking.

“The numbers speak for themselves,” comments Pat Jones, Kings Dominion’s vice-president and general manager. “At a cost of $25 million and with a first drop close to the height of the our landmark Eiffel Tower, you’ll have to see this coaster to believe it.”

According to Jones, Kings Dominion added Intimidator because “we wanted a ride that was intensely breathtaking and offered a longer experience than some of our other rides. It is also meant to pay tribute to Dale Earnhardt in performance and theme. It’s a very effective combination of speed, education and beauty of the site.”

Indeed, the ride’s entry plaza provides a memorial to Earnhardt’s racing career, listing his accomplishments and even displaying one of his cars. While the entire ride time takes three minutes from restraint to release, because of the coaster’s frenetic speed the time in the “thrill zone” takes just 45 seconds. It only seems longer.

Intimidator 305 instantly catapults itself into the position of Kings Dominion’s signature attraction. “This is an enormous and intense ride,” notes Jones, predicting it will become a “gotta do” ride, though not for the faint-hearted.

“It is pure thrill and it does not stop giving thrill until the end of the ride,” she continues, “it is simply unyielding. There is no time to catch your breath; only time to cry or scream with joy. The guests that have dared to ride Intimidator 305 have loved it!”

Jones was one of the first to ride. “It’s a nice perk of the job but also an honour. Dropping over the first hill at 305ft/85 degrees and then going straight into a curve at unbelievable speeds (94 mph) dries any tears that managed to flow out on the first hill.” 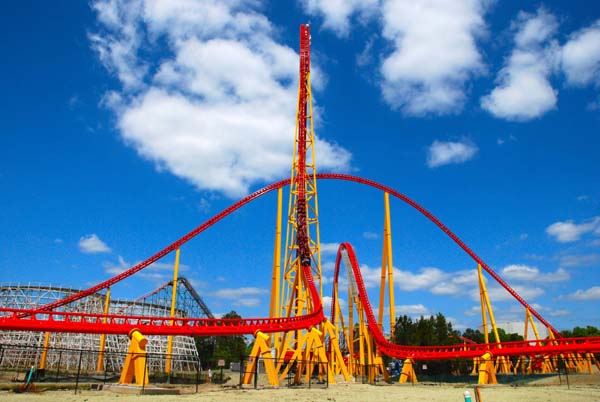 The addition of Intimidator 305 was not problem free, however. The problem? In a word, “Mud! I hate mud,” smiles Jones. “This was the rainiest and snowiest fall and winter in our memories. And this was a previous undeveloped site so the mud came and still has not gone away. I literally got stuck in the mud on different occasions. It did slow construction of the ride down quite a bit.”

While Carowinds chose B&M to build its version of Intimidator, Kings Dominion opted for IntaRide. “They offered some very different concepts that were interesting,” recalls Jones. We had worked on a few projects with IntaRide in the past, so they had an idea of the character of our park and they understood our desire for a new and unique signature thrill.”

Understandably, Jones is very possessive of her new toy. When asked if she had any advice of other operators eyeing a similar coaster her advice was straightforward. “Don’t add one like this. We like being unique. This was a $25,000,000 investment. And right now I believe it is worth every penny.”

In addition to Intimidator 305, “America’s Top Dog” has arrived at Kings Dominion. Snoopy, along with Charlie Brown, Woodstock and the entire Peanuts gang have settled into their new home, Planet Snoopy.

A holdover from Kings Dominion’s days as a Paramount park, the area was formerly known as Nickelodeon Central and Kidzville, but now falls in line with other Cedar Fair parks by incorporating the Peanuts brand.

Kidzville’s Scooby Doo Haunted Mansion has now been rethemed as Boo Blasters on Boo Hill, but does not feature Snoopy. Other highlights include the Flying Ace (formerly Space Surfer), a Chance Aviator in which guests control their own cars, Joe Cool Driving School, Snoopy’s Moon Bounce and, perfect for a hot summer day, Snoopy’s Splash Dance (formerly Nickelodeon’s Slime Zone). Photo opportunities are also available with the Peanuts characters.