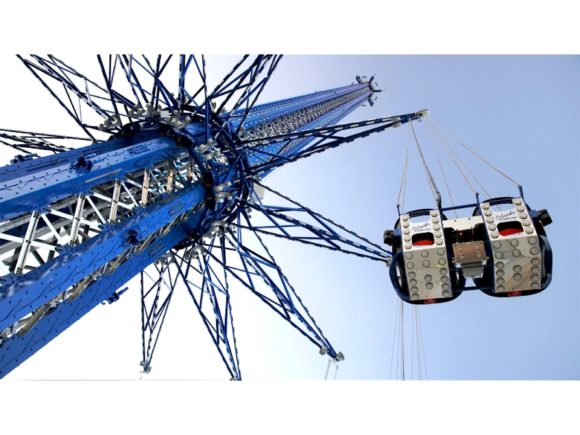 Opened in June on Orlando’s International Drive, the new $10 million Orlando StarFlyer from Funtime is the world’s tallest swing ride, standing at 450 feet (137 m). It has 24 seats (12 x 2 seats), has no age limit and the minimum height for the ride is 44 inches (112 cm). Guests are seated in a double seat next to their friend, family or partner and are secured in their seats with seat belts and an in between the legs harness that can only be unlocked by the ride operator. Riders move up and down and rotate around the tower at speeds of up to 45mph (72 kph).

Funtime has been manufacturers and operators of high thrill amusement attractions for over 25 years. Funtime designs, engineers, manufactures, installs, operates, and have built and installed over 130 attractions in over 25 countries on every continent around the world. The Funtime attractions are built in Austria and have been present in the US since when the Old Town Slingshot was installed in Kissimmee in 2001.

The Starflyer arrived from Austria in 28 40-foot shipping containers and required 1000 tons of steel, 6000 feet of steel cables, 8000 feet of electrical cables, 110,000 bolts and was all built on site. The foundation required 1400 cubic yards of concrete (140 trucks), 75 tons of steel, is 88 feet in diameter and the concrete was poured continuously for 8 hours from midnight until 8 a.m. to avoid the heat and traffic.

Less than a mile to the north on International Drive, a smaller 230 foot (70 m) StarFlyer operates at Magical Midway. Riders can see one from the other.