Park World is given an exclusive preview of the Middle East’s newest waterpark, set to open this August in Ras Al Khaimah, United Arab Emirates.

Ice Land forms part of the new WOW RAK resort in Ras Al Khaimah (RAK). Developed by Polo RAK Amusement, the park is a partnership between India’s Polo Amusement group and the state-owned RAK Properties/RAK investment. Like Ferrari World in Abu Dhabi and various projects before it in Dubai, it is designed to put Ras Al Khaimah (RAK) on the map, hence the Emirate’s name featuring in the title.

“We had a very clear mandate from RAK investment to spend whatever was necessary to bring the park up to standard,” declares Balwant Singh Chawla, Polo RAK Amusement’s managing director and a founder of the Indian Association of Amusement Parks and Industries (IAAPI). “There was a budget to start with, but now we will not know the full cost until we are finished.”

Bordering Oman, about an hour’s drive west from Dubai, RAK is the most northerly of all the Emirates, with a mountain range on the horizon giving it a more distinctive backdrop than other parts of the UAE. Nevertheless, it is hot, dry and surrounded by dessert.

That’s why the “snow” capped “mountains” at Ice Land waterpark , which opens in August, really stand out. Visitors enter the new facility by passing through Penguin Falls, a 160-metre-long, 14-metre high waterfall and the largest manmade structure of its kind in the world. Were the snow real, the water would surely melt it. Yet this is anything but real, and that’s exactly why the theme, which owes more than a nod to Disney’s Blizzard Beach, was chosen.

“The definition of ‘amusement’ should be what people don’t see every day,” believes Singh Chawla. “Everyone here is going for local themes with the ocean, palm trees etc. We wanted to do something that was not here in the Middle East. It’s also a bit about global warming with the ice caps melting. It’s like Antarctica has come to Arabia!”

The 103,000 square metre waterpark has been built with daily capacity for a massive 10,000 guests. Featured are a wide range of attractions, including some industry firsts. “Everyone says you shouldn’t do a diving pool in a waterpark,” notes Singh Chawla. “We have done two.”

Played on a 90 x 45-metre “pitch” with shallow water, aqua football has been a big hit for Polo in India, bringing a wider demographic into its parks. In Ras Al Khaimah the company hopes to develop a local league and host tournaments at the waterpark.

Featured among 27 waterslides is the Middle East’s tallest speed slide, which at over 33-metres steals the record from the Jumeirah Scarah at Wild Wadi in Dubai. There’s also a boomerang slide, a modest tornado and bowl slide, the first of their kind in the UAE. Suppliers include Polo Amusement, Arihant Industrial Corporation and Dominic Fun Rides, with tube, rafts and mats by Zebec from Canada.

Finished in white or pale blue and swallowed up by the theming, it’s hard to spot some of the other slides at first glance, and this to some extent is intentional. Other than the high capacity, walk-through waterfall, Singh Chawla says he did not want any obvious headline attractions, as he is keen that guests should be spread evenly throughout the park. Because of this he predicts that there will be a maximum waiting time of 15 minutes for any one attraction.

For younger guests, Kids Cove features its own slides and interactive water features, supplied by Polo Amusement. It’s all action in the 3,600-metre Arctic Waves pool, with waves by Ionex Engineering. Those wanting to take it easy can float along the 400-metre-long Snow River that circles Penguin Bay.

An RFID wristband system will be used to pay for food, beverage and other items. The technology also doubles as a location device for lost children, offering piece of mind for parents relaxing in one of the 17 cabanas or gazeobos available for hire. Should they wish to surf – without getting wet – wireless internet access is available throughout the park.

Walking around the waterpark promises to be comfortable thanks to shaded paths and soft flooring. This responsible addition on the part of the park’s owners is also very sensible given the size of the facility.

“This will be the only waterpark in the world that will be fully synthetically covered underfoot,” highlights Singh Chawla. “When it’s hot, it will still be very comfortable to walk on, and there should be no slips and falls. When I go somewhere with my family, I want it to be safe.”

Designed by Polo Consulting and Creative Fabrication and Theming in India, Ice Land’s theming was executed on site by a team of Indian, Pakistani, Bangladeshi and Sri Lankan workers. Such manpower helped keep costs down, giving Polo a competitive advantage that ultimately won it the contract for the entire resort.

Under the leadership of Sheikh Saud Bin Saqr Al Qasimi, RAK’s rulers had been wanting to build a theme park for some time and had been in earlier discussions with a major European operator. Polo, which had originally been considering building a waterpark in Australia, came along with a more cost effective option. RAK’s tax-free status and the fact it is just a three-hour flight from the company’s base in Delhi appealed to Polo.

As the operator of two Fun ‘n’ Food Village resorts in India, the company has perfected a business model based on low spending guests (see “Polo in Uzbekistan” over the page). However, in line with the local competition, admission to Ice Land will be significantly higher. The nearest waterpark is Dreamland Aqua Park in Umm Al-Quwain, which charges AED115 ($31/€26), while Wild Wadi and Aquaventure in Dubai both command entry fees of AED200 ($55/€45).

“I don’t look at other parks as competition,” declares Singh Chawla. “If people go to one park and have a good time, then they are going to go to another park. As more and more destinations open, operators will have to keep the quality up.” 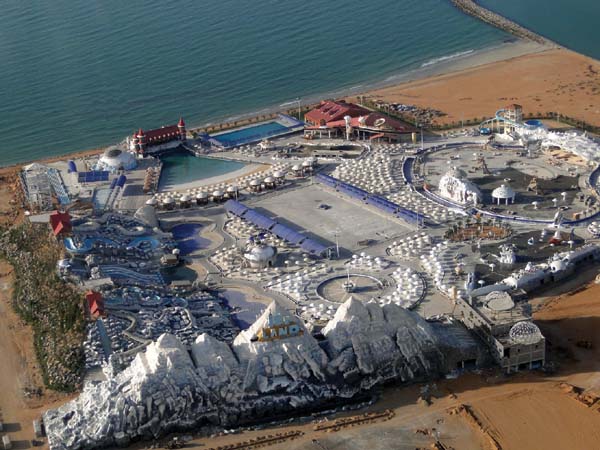 With just 300,000 residents in Ras Al Khaimah, the biggest challenge for WOW RAK will be coaxing guests over from other Emirates. That’s why Ice Land, unlike some waterparks, has been designed to provide a full day of fun.

“If you do a waterslide it only takes half a minute,” observes Singh Chawla. “We have seen in our parks in India, the more interactive things there are for guests they better time they will have and the longer they will stay. That’s we we’ve got things like the aqua football and the rain dance pool.”

“For the first year we will be targeting local market, the second year we will focus on the rest of the Middle East, then the third year we will target the wider market and international tourists. Most of the marketing will be with local travel agents and direct contact via the internet. However, I very much believe in word of mouth.”

Ras Al Khaimah International Airport is already used by several tour companies to fly in Dubai-bound tourists. Singh Chawla believes this presents an opportunity to “borrow” guests before they make to their way over to the more famous Emirate. He also cites RAK’s atmosphere and looser restrictions on alcohol as being important to its own tourist offer in years to come. “Something like a beach bar would really make this place come alive,” he says.

As part of the WOW RAK resort, Polo is developing a beach resort at the far end of the waterpark. Comprising 16 prefabricated chalets, each with 11 rooms, this high-end accommodation will be complemented by a 700-room, 3-star hotel.

A “dry” park called Planet Earth is planned as a second gate. Slightly bigger than the waterpark, it will feature the classic theme park cluster of five lands around a lake. Featured will be a total of 72 attractions, around 50% of which will be undercover.

Linking the two parks will be a “shopping mall,” the first phase of which opens next year. Here Polo has decided not to compete head on with the UAE’s many other retail experiences.

“We are calling it a shopping mall, but really it is somewhere to sell all the gifts and souvenirs from the park,” describes Singh chawla. “People buy things, go on the rides and then get desperate when they forget them. Instead of having shops all over the park, we have just brought them to the entrance.”

Around 450 staff from over 10 different nationalities have been hired for the waterpark and eventually there will be up to 2,000 people working across the entire resort. As in India, everyone is trained to perform multiple tasks so that office staff can work front of house when required, and vice versa.

For the time being the park’s operators are being conservative in terms of attendance expectations. Despite the eye-watering capacity, the goal is for between 250,000 and half a million guests in the first year of operation (the park will open year round). “We say that only 10 days in year will we have 100% capacity,” concludes Singh Chawla. Long term, however, he is aiming for top five waterpark status.

This a project of epic proportions, and we will watch with interest in the years to come as the rest of WOW RAK is developed. Will it succeed it in raising Ras Al Khaimah’s profile? For you, dear reader, it already has.

Polo Amusement is also in the final stages of building a park in Uzbekistan. Fun ‘n’ Food Village in Chirchik near Tashkent is the first of what the company hopes will be 10 parks in CIS (former Soviet) countries, places where many international operators would struggle to succeed.

“The West don’t see the big picture,” declares Polo managing director Balwant Singh Chawla. “When we did our first park in India, I wrote to over 1,000 companies to see if they wanted to partner with us as there was no theme park in India at the time. I told them the spending would be $1. Only five companies wrote back to me. One said even if there was a queue from Delhi to Hong Kong he would not be interested!”

Nowadays, Polo claims to make a profit on an average spend of $5 per head and this combined with low manpower/construction costs and Indian-built attractions make it confident of success in Uzbekistan.

Currently awaiting approval, Fun ‘n’ Food Village is scheduled to open towards the end of the 2010, and will comprise an amusement park, waterpark and various food/retail offerings. 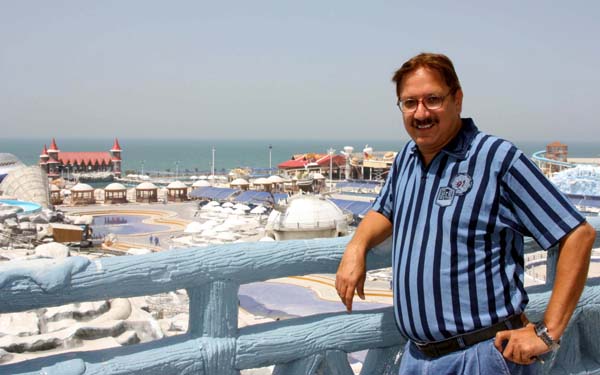