Attendance held up at this year’s IAAPA Attractions Expo in Orlando, thanks to a strong showing of visitors from North America and Asia. Paul Ruben and Owen Ralph report.

Held from November 14 to 18 at the Orange County Convention Center in Orlando, this was 93rd annual convention and trade show of the International Association of Amusement Parks and Attractions, and a focal point for the $24 billion global attractions industry.

Last year the move back to central Florida after 2009’s hiatus to Las Vegas resulted in an attendance increase of around a thousand to 25,000, and this year the total was 25,800. Of those visitors, 15,300 were classed as buyers or senior executives.

“We tried some new things this year and the results surpassed our expectations on several fronts,” reported IAAPA president and CEO Chip Cleary. “Exhibit sales, buyer attendance, education programme participation and total registration are all up from 2010, which speaks volumes about the strength of the industry. The buying, learning and sharing of ideas that takes place here is simply phenomenal.”

With 1,106 companies showing their wares across the North and South halls of the convention centre, exhibitor numbers were down by 34 from last year. Gone are the days when the likes of Zamperla showed almost a mini amusement park worth of rides on its booth, but this is still the show most suppliers pull out all the stops out for, and you won’t see so many exhibits anywhere else.

Of course there was plenty going on away from the trade show floor, too. A total of 123 education sessions and tours were held during the week, both at the convention centre and at local attractions including Disney’s Hollywood Studios, Legoland Florida and Busch Gardens Tampa Bay. More than a third of visitors (8,850) signed up for at least one session.

<p>Most of IAAPA’s various award programmes were consolidated this year under the Brass Ring heading, with winners receiving their trophies during a 90-minute ceremony at the Peabody Hotel on Wednesday afternoon. New inductees into the association’s Hall of Fame for 2011 included John Collins, Frederick Pearce, Wally Boag and Betty Taylor.

With all of IAAPA’s evening receptions moving to a ticketed model this year there was less opportunity for “party hopping” but, who knows, that may have been a good thing. Free receptions and events were also hosted by, among others, BRC Imaginations Arts, the Hettema Group and KMG.

Events such as the annual IAAPA golf tournament, motorbike ride and fun run raised a total of $81,000 for Give Kids The World, the resort for children with life threatening illnesses in Kissimmee, Florida.

“This year we brought four people, and next year I intend to bring more,” reported Brazilian visitor Murilo Pascoal of Beach Park in Aquiraz. “In Brazil we don’t have the same industry as established here in the United States. To be here and see what the industry can be, this is very important.”

“It’s very overwhelming, tiring and informative,” noted Jessica Booth of Thunder Island in Fulton, New York. “ I’ve taken a lot of classes and gotten a lot of stuff out of them, so that makes me happy. It’s nice to connect faces to names of people I’ve done business with for years on the phone.”

“It’s been a great show,” contended Brad Goodbody of ProSlide Technologies. “This is the largest booth we’ve ever had. We’re extremely pleased with the international presence and the number of US clients that have been visiting. We have closed many deals.”

“We’ve been really busy, I don’t think I’ve had more than a couple of minutes’ break the whole time,” reported Scott Snyder of Zebec, supplier of tubes, pads and rafts for waterparks and attractions. “The economy seems to be picking up, although I don’t think it really hurts our industry; people can still afford $20 to go to their local waterpark.”

“It’s good to finally win an award for our pirate ship booth as we thought no one noticed it last year!” laughed Udo Weisenburger of European theming specialist TAA Industries. “The booth was sold on the last day of the show and we are very happy. Having done work for Sea Life in the US is a good shop window for us.”

“It’s a very good show,” smiled Steve Cohen of American manufacturer Wisdom Rides. “I couldn’t believe the people here the first day. Our regular customers came out, and they were in a buying mood.”

“Ten years ago there were more visitors but they were not so professional,” observed Gianluca Fabbri of the Fabbri Group. “We would rather have people with something to spend. I guess if you pay up to $400 to get in you have to be serious!” 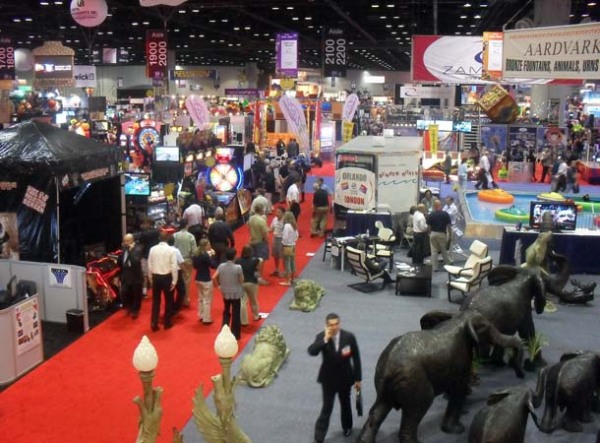 “Acceptable,” was the verdict of Technical Park’s Marco Grigolo. “The US market is OK, and getting better. People were holding off buying from Europe because of the exchange rate but now they they have to buy and the euro is not as strong as it was.”

Despite the presence of 118 nations, several exhibitors picked up on what they saw as an apparent lack of overseas visitors.

“This has not been an impressive show,” dissented Alberto Zamperla of Zamperla. “We are missing a lot of customers from South America, Europe and the Far East. Maybe that will change before the show ends.”

“It seems very American this year,” observed Mike Anderson from Interlink. “This used to be THE international show and you’d always get plenty of Arab and Asian visitors, you don’t get that now.”

“What surprised me was that there were hardly any Europeans,” noted Mondial’s Froukje Knipstra. “We didn’t see any Germans, any Dutch and we only got one one French visitor. From what we see the show could be shortened by one day. Fortunately, the WindSeeker has really put us on the map in the US.”

“Attendance from Europe was rather low,” agreed Intamin’s Sascha Czibulka. “I think this is because of several factors. There is economic uncertainty, we had the EAS [Euro Attractions Show] just six weeks ago in London, and we are again in Orlando. Overall though we had a lot of good quality meetings, and we return home with a nice workload and many promising leads. This is the largest crowd from southeast Asia I’ve ever seen at IAAPA, that reflects where most projects are happening.”

“It’s been a really positive show for us,” said Patrick Lamb of train builder and people-moving specialist Severn Lamb. “It’s good to see lots of familiar faces. There’s not just been a quantity of buyers, but good quality too. There’s definitely a lot happening in the far east.”

“We have had many contacts with American and Chinese buyers who are very interested in our rides and especially in our development of the Flying Launch coaster,” explained Ralf Reifferscheidt of Maurer Söhne. “We have also had discussions with different automobile manufacturers about our Racing Coaster similar to the Ferrari coaster in Abu Dhabi.”

“With all the coasters we’ve put into China, we’re getting a lot of attention we weren’t getting four to five years ago,” revealed Rich Allen of S&S Worldwide. “Attendance seems flat, but we had a pretty full dance card before we came this year, and it’s been excellent for us.”

“It’s the first show where we had every meeting time slot filled before arriving at the show,” echoed Jim Seay of Premier Rides, on a prominent booth facing S&S by the main entrance. “Our Superman coaster for Six Flags Discovery Kingdom has been a big hit, and have several more announcements to make before the Christmas break. This is the healthiest the company has been because of a significant backlog.”

“Our production schedule is now booked until April 2013 and we are working on several sales for parks in the US, Canada and Brazil as well as a result of IAAPA,” reported Peter Theunisz of KMG, which had an X-Factory ride on display during the event at the nearby Fun Spot. “We now start making preparations for February’s IISF Trade Show in Gibsonton, Florida, where we will have two rides set up.”

IAAPA Attractions Expo will be back in Orlando from November 12 to 16, 2012. According to Roland Mack from Europa-Park, IAAPA’s new chairman, interest is high: “Building on the success of the 2011 Expo and based on the strong advance exhibit sales for the 2012 show, we look forward to creating an even more spectacular event for next year.”