Mirroring the rise of the parks and attractions industry in Asia, IAAPA’s recent Asian Attractions Expo (AAE) was one of its most successful to date. Owen Ralph reports from Hong Kong.

Preliminary estimates suggest 5,150 people attended the three-day trade show (June 6 to 8) and supporting activities, 3,220 of whom were classified as qualified buyers. With over 6,300 square metres of exhibits from 274 exhibitors, visitors from 65 nations were able to browse the largest show floor ever at AAE.

More than 1,500 people sat in on the various AAE education sessions, including seminars on social media, maximising revenue and attraction design, plus Leaderships Breakfasts from OCT vice-president Wu Si Yuan and Hong Kong Disneyland managing director Andrew Kam. Offered for the first time at AAE, the day-long IAAPA Institute for Attractions Managers, was a sold-out affair.

Evening events at Ocean Park and Disneyland were augmented by additional networking opportunities including the Young Professionals Reception on the eve of the show and a post-event mixer from the TEA (Themed Entertainment Association). Exclusive tours made available to AAE attendees included “Disney at Dawn”, a behind-the-scenes visit to the Ngong Ping 360 cable car at Lantau Island and a weekend trip to Chimelong Resort in Guangzhou.

“I’ve been coming [to AAE] for four or five years now, and it’s scaled up phenomenally just in that short time,” observed Mike Barclay, CEO of Singapore’s Sentosa Development Corporation. “What I’m beginning to see is some innovation that is born and bred in Asia, being reflected here. The energy that’s here is phenomenal; just look at the turnout for the educational sessions – the hunger for learning is really strong.”

Fears that new theme park development in China may be slowing due to a government directive limiting facilities of a certain size seemed relatively unfounded. There were, noted Chris Yoshi of AECOM, certain loopholes developers could exploit ­– such as not explicitly calling them theme parks. Yoshi was speaking at a lunch to mark the release of the Theme Index attendance report for 2011. Fortunately, “there is a willingness to pay a decent amount” for existing parks in China, most of which are charging in excess of RMB150 (US$24/€19). In Hong Kong, where attractions can generally command a higher fee, the city is now benefitting from an increased tourism offer, witnessed by the recent formation of the Hong Kong Association of Amusement Parks and Attractions (HKAAPA), one of this year’s new exhibitors.

Another first-timer was local company Cypress Productions. “We are happy to have access to many of the people in the industry from around the world,” reported Kevin Ng. “This was a successful Expo.”

“The growth within China is great for what we do,” reported Gary Wang of Unite Art from Shenzhen, which has completed theming and design work for many leading players including OCT and the Chimelong group. Currently working on the latter’s new Ocean Kingdom resort in Zhuhai, Wang says his company was also looking for projects internationally.

Based in Shanghai, the Leaders Group is the only company within China offering a “one stop shop” for theme park planning, design and construction, according to vice-president Ryan Li. Set up in 2007, the company’s directors boast over 200 years’ combined industry experience and were on hand at AAE with a large booth to assist clients.

Known as both a theme park operator (under the Fantawild banner) and supplier, Hytechnology was attending the show with several objectives. “We are here to sell our 3D equipment and technology, consult with parks and find new joint venture partners,” Anna Kuang informed Park World.

As well as a large number of exhibitors from China and other Asian countries, represented were most of the established Western ride manufacturers and suppliers, reflecting the fact that they now do a lot of business in their East. 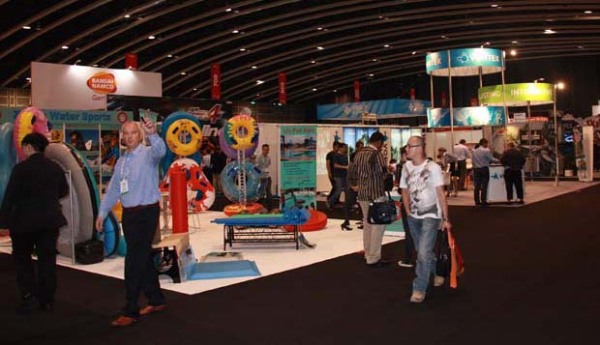 “China is the market!,” smiled Chuck Bingham of Martin & Vleminckx, which currently has two rollercoasters in the country and three more on the way. “We’ve had a lot of interest in our Swing Thing water coaster. This has been a great show, and certainly met all our expectations.”

With SkyLoop rides already operating in Changzhou and Wuhan and a further two rides on order for the Fantawild chain, “Asia is the main market for us right now and will increase further in the years to come,” revealed Horst Ruhe of Maurer Söhne.

“We had a constant flow of people over the first day,” revealed Sascha Czibulka on the Intamin booth, “in fact we ran out of chairs!. Last year it was mainly people from China, this year there has been a good number from all parts of Asia, plus some European countries too. I’ve learned of two  projects I didn’t know about before coming to the show, whereas last year we didn’t hear about anything new.”

“We’re doing a lot in Asia,” said Scott Snyder of the North American tube and raft specialist Zebec Water Sports. “Chimelong Water Park uses almost every one of our products, then there’s places like Malaysia where we’re in every park in the country.”

“We see good demand from Asia and the Middle East, while Europe is slowing down,” noted Edward Cromheecke of the Fabbri Group. “We are concentrating on our strongest segments – mid-size and family thrill rides – and have seen some serious customers from China, Singapore, Brunei, Thailand, Azerbaijan and India.”

“The show has been good,” added Enrico of fellow Italian manufacturer Rides & Fun. “Around 60% of our customers are now coming from Asia and the Middle East. We’ve seen lots of prospective customers; you have to be here.”

The European theming specialist TAA has not yet done any work in Asia, but hopes that its recent work for Madame Tussauds Sydney in Australia may provide a stepping stone. “The show was not as busy as Singapore last year, but we’ve had some good contacts,” said Christian Angenvoort. “If we get one or two clients here, then we may open a workshop in Asia.”

Perhaps one of the few dissenting voices came from Theo van Zwieten of Mondial, but even he offered a note of optimism: “The show is getting too big, which means people have less time to visit your booth, but if it’s growing that has to be good for the industry.”

If you looked hard enough among the various exhibitors, you would still have found some local companies offering rides that resembled close replicas of those from various European manufacturers, but with the introduction of its new Intellectual Property (IP) programme, IAAPA could not be accused of turning a blind eye. During the show, the association’s IP representatives handled more than 15 cases that involved the removal of catalogues, posters or other content from the trade show floor. The challenge for the industry in the years to come will be stopping some of these products even getting to production. This new initiative, which will be continued by IAAPA at Euro Attractions Show in Berlin and IAAPA Attractions Show in Orlando, was met with general support from exhibitors – just like AAE itself.

“IAAPA’s presence in Asia is expanding along with the attractions industry, and that is evidenced by the record turnout for the 2012 Expo,” concluded IAAPA president and CEO, Chip Cleary. “The conference and trade show has grown tremendously since we opened the IAAPA Asia-Pacific office less than two years ago, and going forward we expect the show will continue to reflect industry growth within the region.”

Indeed, with Asia generally acknowledged as being the fastest growing region of the world for the parks and attractions industry, it seems safe to assume that AAE will go from strength to strength over the coming years, snapping at the heels of IAAPA’s Euro Attractions Show (EAS).

Asian Attractions Expo 2013 has been confirmed for June 4 to 7 at Marina Bay Sands in Singapore, and more than 150 exhibitors have already reserved their space. 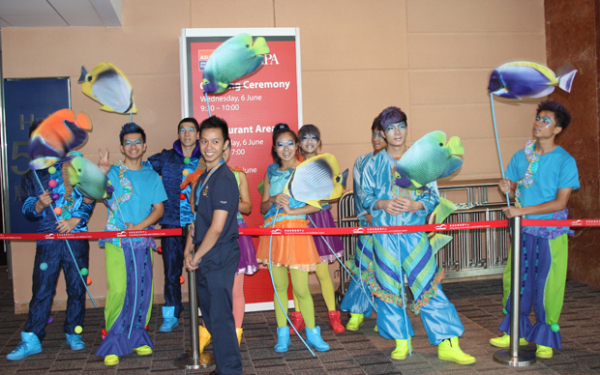