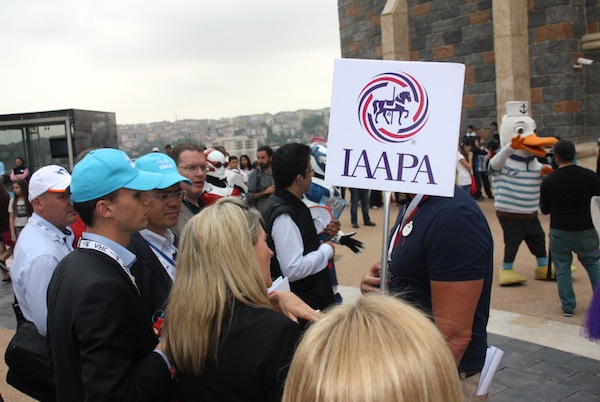 In the city that prides itself on its reputation as the meeting place of Europe and Asia, IAAPA staged its fourth European Spring Forum this May, bringing together members from 26 countries for a two-day programme of seminars and attraction visits. Owen Ralph joined the trip.

The event, on Thursday and Friday May 21 and 22, followed previous IAAPA Europe Spring Forums at Europa-Park (Germany), Efteling (the Netherlands) and Liseberg, Sweden. Yet whereas those where held as a precursor to the following year’s Euro Attractions Show (EAS) in the same countries (the 2016 show will be in Barcelona), this latest edition was chosen as part of IAAPA’s desire to focus on emerging markets and also its European office’s mission to recruit new members from a little further east.

Turkey, rich in history, is fast becoming a hotspot for parks and attractions. The country already boasts a significant number of family entertainment centres and “luna parks”, but now a new generation of themed attractions is emerging, and two of them were included on the Spring Forum itinerary: Vialand and KidZania.

But before the 130+ delegates got to play, first there was business to attend to, starting with a series of IAAPA committee meetings on Wednesday May 20 at the headquarters hotel, the Conrad Hilton. Then on Thursday morning it was onto the bus for the 45-minute drive to Vialand, the theme park and shopping mall opened just two years ago as part of one of Europe’s largest urban regeneration projects. 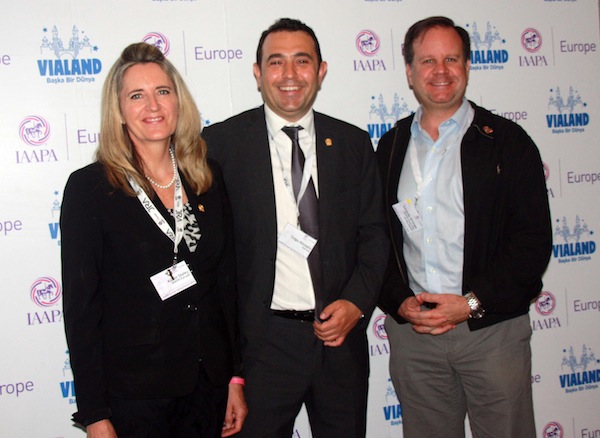 The mix of amusement and retail is not new in Turkey, noted the park’s general manager Tolga Alisoglu in his welcome address. This “360° approach was pioneered at early spice bazaars and fairs, at which various entertainment was also provided. But Vialand is part of a new era, built by a company that already operates retail businesses including the city’s Viaport mall and soon Viaport Marina, both with rides.

As with last year’s Spring Forum at Liseberg, the first day of the seminar programme, chaired by IAAPA Europe vice-president Karen Staley, focused on safety, starting with a session from Michele Bertazzon of the famous Italian ride manufacturing family and EAASI president Gianni Chiari. As well as updates on standardisation, issues raised included how long you can suspend someone upside down, the need to establish an acceleration limit for children and Gianni’s sage observation that, “people want more emotion and sensation but the human body has been basically the same for 20,000 years.” Following the Italian duo’s presentation, Marcus Brian of Merlin Entertainments, brought us up to speed on waterpark safety. Paul Chatelot, prevention, safety and environment director for Disneyland Paris, concluded the afternoon’s education with a presentation on safety culture. More in-depth discussion on the above (the programme at Spring Forum was more relevant to some attendees than others) will be offered on the IAAPA Safety Institute held ahead of EAS in Gothenburg on October 5.

So, after 2,5 hours in a darkened room, it was time for some al fresco action. Guided tours of both park and mall were offered by Vialand staff. Although operations manager Cem Tuna admitted “the park is my home, not so much the shopping mall,” the latter facility did feature some offerings of interest including the Joy Park FEC, a trolley bus ride by Severn-Lamb and a sneak preview of the indoor Wildpark attraction opening soon. For many touring the park, the highlight was the Intamin launch coaster Nefekesen, a thrilling ride made all the more breathtaking thanks to its hillside location. The coaster also made a nice backdrop for an early evening drinks reception as delegates looked down over the rest of the park and the vast metropolis beyond. “You know, it reminds me a little bit of Tibidabo in Barcelona,” observed French FEC operator Evelyne Villame. 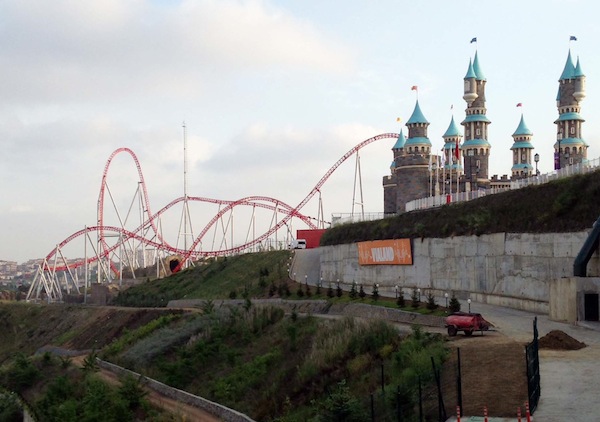 An absolute highlight of the event for most in attendance was the dinner cruise that followed that evening on the Bosphorous strait. Attendees sipped drinks on the top deck as music played and the sun set over this bustling city, sailing beneath the illuminated suspension bridge that links west with east, and then slipped downstairs later for a three course meal. Bravo IAAPA, great night!

A quick hop over that famous bridge – into “Asia” – brought delegates to the Akasya shopping mall the next morning, home to Turkey’s first KidZania children’s entertainment centre, although not the first role-playing attraction of its kind in Istanbul. Asked later how the facility made an impact in the city following the earlier arrival of newcomer KidzMondo, CEO Lara Sayinsoy explained that it benefited from the past experience of KidZania around the world (16 outlets and counting), its location in the mall and also its ease of access to citizens on the Asian side of the city, who often find the traffic over the Bosphorous BrIdge prohibitive at weekends. At around twice the size of KidzMondo, KidZania is already attracting around three times as many guests. Imitation is indeed the sincerest form or flattery.

The vibrancy of the Turkish market has not been lost on Merlin Entertainments either. Europe’s number one attractions operator entered the country in 2013 by taking over the former Turkuazoo aquarium (also located in a shopping mall), which it has recently rebranded as Sea Life Istanbul. Facility general manager Gülnur Inkaya told us more about this, Merlin’s plans to open a Legoland Discovery Centre in the same building, and also a lot about the company’s worldwide portfolio. As for Turkey or any other markets in the region, she would only reveal that Merlin plans on doing more projects in the country. 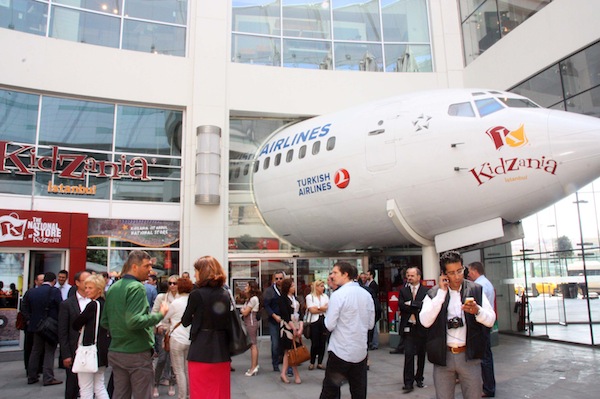 An entertaining presentation on the emerging market of Poland was delivered by Daniel Heinst from Holiday Park Kownaty, which next year will welcome a Maya the Bee-themed indoor park in partnership with the Belgian group Plopsa. Daniel traced the development of various Polish attraction formats, from old-fashioned amusement parks to dinosaur parks (“static dinosaur figures and a cash register”) and miniature worlds, through to science centres with 6-month school waiting lists. Whilst most of these are relatively cheap and cheerful offerings, with multiple “me too” competitors, they nevertheless demonstrate the entrepreneurial spirit in the country, and the thirst for family attractions on the part of the general public. Holiday Park, which follows hot on the heels of Energylandia (opened in 2014), should do well.

Turning the spotlight back on Turkey, Vialand boss Tolga Alisoglu said he was pleased to witness the arrival of Sea Life and KidZania, because it meant there were more places to take his own young children. Maybe he’ll face tougher competition in a few years from Tema World, a 1.5 million square metre real estate/park development taking shape with the help of plans from both JRA and Jora Vision, one of this year’s Spring Forum sponsor. General manager Mehmet Emeç is no stranger to the theme park business thanks to his experience at Disney and in the early stages of Vialand. In a city as vast as Istanbul (14 million+ inhabitants) there should be room for both parks, however Mehmet warned that the average local income is still relatively low, as indeed are current attraction dwell times (2.4 hours on average).

Funnily enough that’s about how long everyone waited for lunch after the morning’s education programme (just joking, Karen!). A lack of internal communication at the restaurant can’t really be levelled at IAAPA’s door though, and although it meant a rushed tour of KidZania afterwards, most people left the Spring Forum upbeat after an enriching two/three days in one of Europe’s (and Asia’s!) most exciting cities. A handful of participants even got the chance to extend the proceedings by joining the post-tour to Antalya courtesy of Polin Waterparks (see below).

More photos to follow in the June issue of Park World!

As many delegates jetted home after Spring Forum, a bus load stayed around and took a trip to the large new premises of Polin Waterparks, opened last year about an hour outside of central Istanbul.

There they got to see how the waterslides are being produced during a tour of the manufacturing plant conducted by technical director Ozkan Sur, after a presentation from director of marketing and communications, Söhret Pakis. After all that foreplay, some of the group (others returned to Istanbul) then got to try the slides for real during a whistle-stop tour the following day of three hotel resorts/waterparks in the Antalya region.

First onto the slides – including Polin’s signature King Cobra – at Crystal Waterworld in Belek was a very keen Miikka Seppälä, CEO of Särkänniemi in Tampere, Finland. Unfortunately there wasn’t any time to enjoy the waterpark facilities at sister hotel/resort Crystal Aura in Kemar, but it provided a very pleasant setting for lunch. The day was rounded off at Rixos Premium Tekirova, another well-appointed beach resort property. Here the guests could enjoy a full-sized waterpark including the world’s first Polin Surf Safari, Looping Rocket and a combination ride featuring miniature Sphere sections, plus a kids’ water play structure. Interestingly there were no wave pools at any of the venues visited, this apparently being a relatively rare waterpark feature in Turkey.

“We owe a huge thanks to Suleyman Kilit, owner of the Kilit Group (parent company of Crystal Resorts), and also Tolga Kilit, for allowing us time to enjoy their facilities,” concludes Polin’s Kubilay Alpdogan, who lead the tour. “We also thank Ahmet Colakoglu for the wonderful hospitality he bestowed on us at Rixos Premium Tekirova. Our slides have helped launch these all-inclusive properties into leading positions within the resort industry, and we hope others will allow us to build and bring that same experience their venues too!”

Park World knows of at least two operators on the trip who are planning new waterparks, so clearly the manufacturer will be having a word! 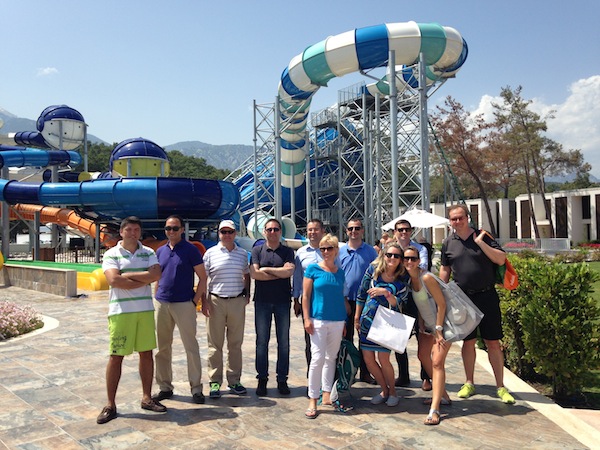