Staged by the International Association of Amusement Parks and Attractions (IAAPA) at the Orange County Convention Centre (OCCC) from November 12 to 16, the was the third straight year the event was held in Orlando, where it scheduled to stay until 2019. There maybe wasn’t quite the same buzz on the floor as some previous shows, but nevertheless attendance was up from 25,800 last year and 25,000 in 2010. The record in Orlando, incidentally, is 30,062, set in 2003.

A new addition to the show floor for was the IAAPA Theatre, which hosted events including the Tuesday morning’s Kick Off Event, the Welcome Reception and Brass Ring Awards. This meant there was slightly less booth space, though there were more exhibitors – 1,176 versus 1,106 in 2011. Meanwhile a selection of flat rides, zip lines and inflatables could be inspected in the largest outdoor exhibition area for 10 years.

Attending Attractions Expo show is always exciting, not just for the exhibition but also for the many networking events and educational opportunities available during the week. This time there were some added fireworks, however, as two exhibitors were served with papers requiring them to appear for legal proceedings, and who subsequently left the show after violating IAAPA’s recently introduced Intellectual Property policy. More details here.

Normality soon returned to the OCCC, as visitors perused 494,770 sq ft (45,965m) of exhibits, and sat In on 115 seminars, panel discussions, half-day symposiums, multiple-day institutes and behind-the-scenes tours. In fact, there was a 14% increase in education attendance this year, with 9,100 people participating in the various sessions.

IAAPA continues to raise money for Give Kids The World, the Florida resort for children with life-threatening illnesses. As a result of a golf tournament, motorcycle ride, fun run and other activities during Attractions Expo, an additional $94,000 will now go towards its running.

Just short of 1,800 people purchased tickets for Thursday night’s IAAPA event at Universal Studios. Sometimes it’s hard trying to check out all the attractions, eat, drink and socialise at such gatherings, but around half the park was available to guests to enjoy on the night – including Shrek 4D, Despicable Me Minion Mayhem, The Simpsons Ride, Men in Black Alien Attack and Hollywood Rip Ride Rockit.

There were official receptions for IAAPA members from a wide range of geographical locations and industry sectors, from Latin America and Asia Pacific to waterparks and family entertainment centres. BRC Imagination Arts, The Hettema Group, Rides 4-U and the Themed Entertainment Association (TEA)  were among those hosting parties in and around International Drive during the week.

“IAAPA Attractions Expo is the one time of year when the amusement park and attractions family gathers to conduct the business of fun and this year was a homerun for the industry,” proclaimed the association’s outgoing president and CEO, Chip Cleary.

“I’ve been coming to this show for many years, and this was one of the best,” commented Alain Baldacci, Wet ’n Wild, Brazil (and a former IAAPA chairman). “It was a good turnout, and the seminars are getting better all the time. It’s a complete trade show; we can find anything we need and want.”

“It is tiring on the feet, but it’s been a very interesting show,” remarked Dick Knoebel of Knoebel’s Amusement Resort in Pennsylvania. “We didn’t specifically buy anything here, but did do some research for 2014.”

As well as those attraction operators walking the show floor, a handful were also attending as exhibitors. These included several companies from Asia Pacific keen to get their names known internationally, such as the Wanda Group from China and Malaysia’s Themed Attractions and Resorts (TAR). The latter was hosting the internet lounge next to IAAPA Central, where details were available of new attractions including Legoland Malaysia, Little Big Club and Hello Kitty Town at Puteri Harbour.

“We’ve got off to a good start,” TAR CEO Tunku Dato’ Ahmad Burhanuddin informed Park World. “Legoland is getting up to 17,000 guests a day at weekends and the retail is performing even better than we expected at Puteri Harbour. We came to IAAPA last year looking for interactive technology to use in our Lat’s Place restaurant, and we found it on the show floor.”

Meanwhile the Australian operator Village Roadshow Theme Parks teamed up with regular exhibitor Sanderson to showcase its portfolio of attraction brands available for expansion worldwide. “We are happy to work together to explore new opportunities,” Village Roadshow’s Alistair Bennallack revealed. “We are not looking to do tonnes of parks In North America, but are actively looking for sites here. We’ve made some good contacts during the show.”

“This year’s show proved the resilience of IAAPA’s [member] base,” contended John Wood of the Sally Corporation. “We had successful Asian and European shows, and yet the buyers still came, and the enthusiasm on the floor has been contagious by both buyers and sellers.”

“The show here has been fantastic,” smiled Peter van Bilsen of Vekoma Rides Manufacturing. “Even though the shows in Asia and Europe are getting larger, this show remains the biggest and best.” 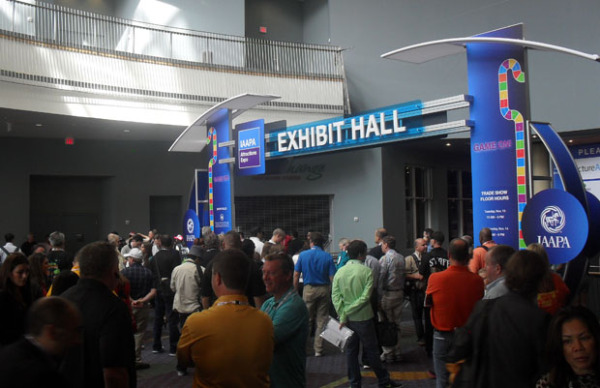 “The first two days of the show were pretty good,” noted Sascha Czibulka of Intamin. “The third day was quieter than normal. We didn’t see that many European visitors, understandably, with Euro Attractions Show (EAS) just a few weeks ago in Berlin. But we’ve never seen so many Asians here.”

“The show has been great, an opportunity to meet many people and have interesting discussions,” stated Walter Bolliger of Bolliger & Mabillard. “It is a great meeting point to have discussions with park owners and friends.”

“We didn’t know what to expect having just come from EAS in Berlin, which was so good, and also because of the storm up on the [US] northeastern coast,” commented Tami Dean of the Ride Development Company. “But it’s been our best IAAPA show for four years; I think it certainly helped having our new LED bumper cars on the booth.”

“It became clear during the show that the amusement industry is recovering from the economic crisis,” observed KMG’s Peter Theunisz. “Parks and ride owners understand that they have to invest so they will not lose their edge when better times arrive. IAAPA did a very good job with the organisation but the lack of free WiFi on the exhibition floor is a missed opportunity as the internet has become one of the most important sales tools. IAAPA even brought out its own app for the Expo but attendants couldn’t use it because they couldn’t access WiFi.”

“This has been a good show,” admitted Fred Miler of American coaster manufacturer E&F Miler Industries. “We’ve made got decent leads. We’re all custom designed rides, so we make contacts here and go home with proposals to prepare.”

“We were very busy for the first two days,” revealed Patrick Lamb from Severn-Lamb, ”and there were also some great networking away from the show. IAAPA’s new Intellectual Property initiative is really encouraging for Western companies like us. I was even stopped taking a photo of my own booth, but that’s great and shows the association is taking this matter seriously.”

Back in 2006, the Belgian technology specialist Alterface exhibited its ‘5D’ Interactive Theater at IAAPA for the first time. This year similar products from rival manufacturers were much in evidence on show floor. “They’re everywhere,” sighed Alterface marketing man Olivier Vincent. “Fortunately, we move on, and have developed new innovations including our interactive shooting wall and interactive zombie game.”

At the S&S booth, Bill Kitchen of US Thrill Rides unveiled his new PolerCoaster, which S&S will build. The reaction, according to Kitchen was, “Why didn’t we think of that?  Everybody loved it. We should have firm contracts signed by the end of the year.”

“It was a very good show for S&S,” confirmed Rich Allen. “I think we received more attention this year as the result of our new ownership by Sansei. I anticipate a sale of a PolerCoaster to open in 2014. I will be very surprised and disappointed if that does not happen!”

“The show is slower than last year,” added Mirko Schulze of Huss Park Attractions, “but we met some very interesting people, so it was a very good show for us. We met clients from all over the world, including China – one of our key markets.”

“There don’t seem so many people here but we have made some good new contacts and did two deals early on in the week,” said Michele Bertazzon from the Italian ride manufacturing family of the same name. “The US market is not as slow as it was a few years ago and as we are well established in the market, we will already be on many customers’ lists when they look for new equipment.”

“There is no real atmosphere or buzz this year,” remarked Technical Park’s Marco Grigolo. “EAS Berlin was an excellent show for us, but I think the people are less interested to come to Orlando after three years. And now, with the internet and magazines, everyone already knows what is out there anyway.”

It was nine years ago that another Italian manufacturer, C and S, last exhibited at IAAPA. “There has been a sharp increase in the cost of exhibitor services since we the last time we came,” observed Giancarlo Bellotti. “The first day was OK but after that we had a lot of window shoppers. I think even if there are the same number of people here, they are not all buyers because the big groups send only a few people do make their decisions, and then the travelling showmen come with four or five family members.”

“We didn’t see too many American buyers on our booth,” commented ABC Rides’ Stefanie Reumer, “however we’ve just appointed a new representative for North America (Steve Boney) so we hope to do more here in the years to come. Overall it’s been a good show, and we signed one order on the first day.”

IAAPA Attractions Expo 2013 will take place at the Orange County Convention Center from November 18 through 22. If you’re in the industry, you’ll want to be there. 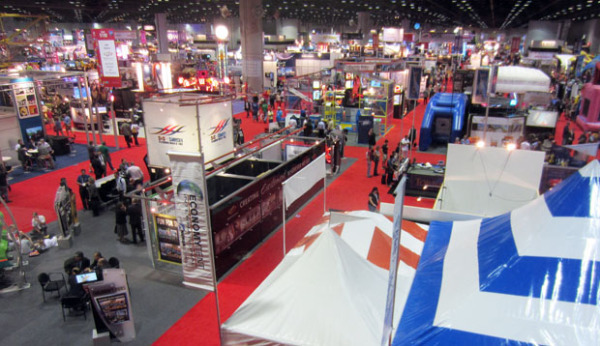