New innovations were few and far between, but the mood was buoyant on the floor of IAAPA Attractions Expo 2010 in Orlando. Paul Ruben and Owen Ralph report.

This, the 92nd annual convention and trade show of the International Association of Amusement Parks and Attractions (IAAPA), took place from November 15 to 19 and it appears IAAPA did the right thing in returning to Orlando – “theme park capital of the world”. Preliminary estimates indicate around 25,000 people – including approximately 14,800 buyers – attended the week-long event. That’s about 1,000 more than last year in Vegas, or two years ago in Orlando. The challenge now will be to sustain the same level of support over the coming years in Orlando, where the show is worth an estimated a $47.7 million to the local economy and scheduled to stay for the next nine years.

The giant North/South hall of the Orange County Convention Centre boasted exhibits from 1,140 companies across 453,100 net square feet of the trade show floor. That’s up almost 50,000 square feet from Las Vegas, down nearly 30,000 from Orlando in 2008. The show floor was not without a number of gaps. Former up and coming companies such as Creative Kingdoms, Total Immersion and HIT Entertainment were missing from this year’s Expo, but there were some newcomers.

During the week, attendees participated in over 100 seminars and educational events, including the ever-popular Disney Legends panel, sessions on industry trends such as social media and behind-the-scenes tours at many Orlando attractions. A crowd of 400 enjoyed a keynote address by Universal Parks and Resorts chairman and CEO Tom Williams at the General Managers and Owners’ Breakfast on Wednesday morning.

Fundraising events including a golf tournament, sponsored run/walk and charity bike ride raised more than $73,000 for Give Kids The World, the Florida resort for children with life-threatening illnesses.

“It’s good to be back home here in Orlando,” said outgoing IAAPA president and CEO Charlie Bray. “We’ve had a great show. There’s an overall sense of optimism in the industry. Exhibit sales are strong and attractions industry leaders came here to buy. We had outstanding participation in our education conference and the social events were a big hit. I think these results reinforce the fact that Orlando is the right location.”

“It’s the premier event of the year,” highlighted Brian Knoebel of Knoebels Groves Amusement Resort and Campground in Pennsylvania. “We bring a staff of up to 20 people each year – operations managers, games managers, food and beverage managers – and try to gain as much knowledge as we can.”

“I’m delighted to be in Orlando, and it’s good to see more Asian representation among the exhibitors,” noted Ocean Park marketing director Paul Pei, visiting from Hong Kong. “Many of these companies are growing dramatically and doing business here for the very first time.”

“This has been excellent, the best show in the past few years,” remarked Peter Van Bilsen of Vekoma. “People have more confidence in the market now, and see more possibilities. People are buying more rides and building more parks. It’s good for everybody.”

“It’s been great fun,” smiled Tom Rebbie of the Philadelphia Toboggan Company. “The first day of the show I talked to more people than I did in four days in Las Vegas. I can’t get out of the booth. It’s been busy, with off-the-wall sales of new trains, parts and winter overhauls. I’m so happy we’re going to be in Orlando for the next nine years.”

“The show has been very good,” agreed Rich Allen of S&S Worldwide, “with a lot of activity, more than in Las Vegas, and a with higher quality conversations. We’re very busy in Asia and the US economy is recovering so there is more interest in North America.”

“We’ve been very busy, and see a much more positive attitude than last year,” concluded Premier Rides’ Jim Seay. “The industry has again proven itself to be recession resistant, enabling the client base to grow with new project opportunities. We continue our big focus in Asia.” 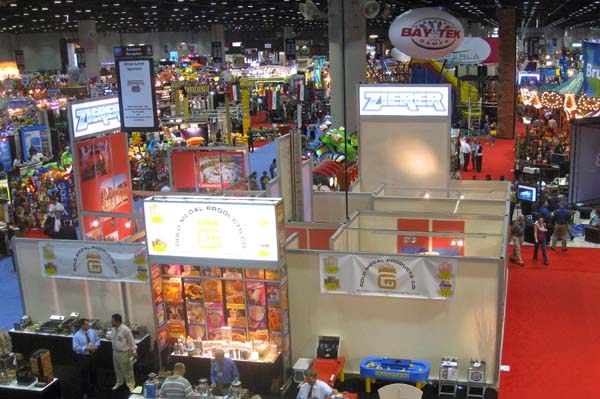 “Compared to Las Vegas, we have seen more visitors and clients in our booth, and more interesting contacts,” disclosed Intamin’s Sasha Czibulka. It’s been a good show. The first two days were very busy; then it gradually slowed. And we won best new product for our mine train with freefall.”

One of this year’s new exhibitors was BauArt, a German supplier of wooden playgrounds: “The reaction to our product has been very positive,” noted Helmut J Albrecht of the company’s Florida subsidiary. “People like to see something different and there seems to be a trend towards customers wanting natural materials.”

Also making his IAAPA debut was Enrico Negri from Fabbri Group subcontractor BN Performance Rides: “This is the first time we have sold directly,” he informed Park World. “It’s funny because people have been coming up to me and saying, ‘this is my ride,’ without realising we actually built it!”

Several European exhibitors approached the show with caution, but were pleasantly surprised by the results: “I did not expect to see so many highly-qualified people,” admitted Maurer Söhne’s Horst Ruhe. “We had a lot of very good talks that we think will result in future projects.”

“There are not many customers, but there are some good ones,” remarked Andrea Sartori of the well-known Italian ride manufacturing family. “Most of the people we have been talking to are from the Middle East, India and South America; the US is not spending and the dollar-euro exchange rate is still a problem.”

“The American market is not fully recovered yet,” agreed Swiss Rides’ Oliver Goyeneche, “however it’s been a successful show for us and we see the difference in quality compared to Rome just a few weeks ago.”

“Our boat definitely created attention,” observed Christina Angenvoort of theming specialist TAA Industries, with a booth resembling a pirate ship. “It’s better than just bringing brochures. There are not too many entertaining exhibits here, which is a shame because this is supposed to be a trade show for the entertainment industry!”

“This has been a thin but enthusiastic show,” noted Zamperla’s Ramon Rosario, a company that not so long ago would bring numerous rides to IAAPA, but this year showed just a kids’ swing ride plus a plane from its new Air Racer at Coney Island.

While inflatable attractions dominated the small outdoor exhibition area, there were a couple of interesting rides on display including S&S Worldwide’s new Jungle Swing and a Daytona kids’ car ride from the Fabbri Group. As well as its various products on the show floor, Rides 4U also invited potential buyers over to Old Town in Kissimmee, where its Dutch partner KMG had erected a Freak Out ride for inspection. Some exhibitors (and ”suitcase exhibitors”) didn’t need expensive displays to demonstrate their wares. This was, it must be noted; the trade show of the iPad, with seemingly every other person keen to show you their latest projects with just a few jabs of their touchscreen.

So was there really a lack of innovation on the show floor? Maybe: “It’s easy to get people over to our booth because there is not much else new to see,” observed Benoit Cornet of Alterface, which recently appointed a US sales partner for its range of interactive theatres and other multimedia attractions. “The visitors are more business like than in Las Vegas, but I wish IAAPA would do something to give the show new life. I think this one suffered from success of EAS in Rome; we saw more international visitors in Rome than we saw here.”

Unhappy with the position of his booth, Ruud Koppens from ETF Ride Systems clearly had an axe to grind: “The organisers need to be more customer friendly. Las Vegas was not a good place to be and last year’s show was probably the worst and most expensive IAAPA for us to date. The first two days here have been good, but still attitudes need to change. We need IAAPA, but IAAPA also needs us.”

But if there was one man to sum up the rather more enthusiastic tone of the American exhibitors, it had to be Jeff Pike of Great Coasters International (GCI). It was such a good show for GCI that Jeff donned an inflatable Uncle Sam suit and paraded up and down the aisles.

In 2011 IAAPA Attractions Expo will return to the Orange County Convention Center from November 14 to 18. See you then. 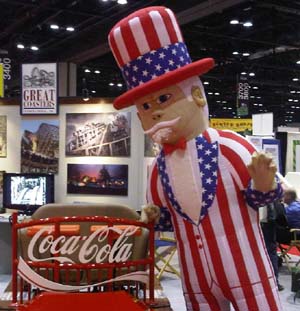