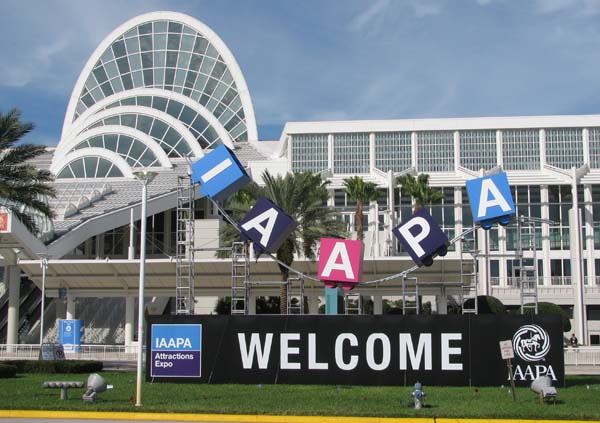 A blast of cold air engulfed Orlando, Florida, for the beginning of IAAPA Attractions Expo back in November, but activity inside the Orange County Convention Center was heated, buoyed by the largest attendance in 17 years. Paul Ruben and Owen Ralph report from the big industry get-together.

An estimated 30,500 amusement park and attractions industry professionals (19,400 of them classed as potential buyers) from 116 nations attended the even from 17 to 21 November, an increase from the 29,000 attendees in 2013. In fact, it was the second largest turn out in the event’s history, exceeded only by 1997’s 31,500 attendees, also in Orlando.

“We saw a lot of new faces, and that’s very important,” observed Gerardo Arteaga of Fantasilandia, Santiago, Chile, inducted during the week as the new IAAPA chairman for 2015. “There was a lot of excitement, with people trying to see as many suppliers as possible. Exhibitors are improving their booths every year, and there was so much out on the floor to see.”

Well over a third of attendees – 12,500 – sat in on an education session, of which 110 were offered, up from 80 last year. These included multiple-day institutes, behind-the-scenes tours, panel discussions, half-day symposiums and a couple of lunch/breakfast keynotes, including Thursday morning’s GM and Owners’ Breakfast, when Ripley Entertainment president Jim Pattison invited an audience of almost 800 to set a new world record for flying model planes (Ripley’s, for the uninitiated, owns the Guinness World Records brand).

This was the fifth straight year of the current run that the largest conference and trade show for the $39.5 billion global attractions industry was held in Orlando, where it is committed to stay for many years to come.

As well as the traditional Thursday night social, which this year took in the complete Wizarding World of Harry Potter experience at Universal Orlando, there was a new event called IAAPA Connects, held at Walt Disney World’s Magic Kingdom park on a rainy Monday night – not that it could stop the Disney magic of course.

Expo participants raised approximately $120,000 for Give Kids The World (GKTW), the local Florida charity resort for children with life-threatening illnesses with a golf tournament, motorcycle ride, fun run and walk, a drawing contest, plus several individual and corporate donations. Zamperla even donated a ride to the GKTW village!

The event completed a year of back-to-back growth for IAAPA’s trio of international trade shows. Not allowing for overlap between the three, more than 50,250 people combined participated in the Orlando Expo, Asian Attractions Expo in Beijing and Euro Attractions Show in Amsterdam.

“The continued growth of all three expos is representative of the strength of the attractions business worldwide,” said IAAPA President and CEO Paul Noland. “The record number of press announcements this week is an example of the industry’s commitment to innovation.”

“We feel we have fewer people here than the year before,” mused Albert Zamperla. “Bad weather and the growing European and Asian shows have discouraged people from coming to Orlando. For me, attendance means how many buyers are here, so I doubt the numbers. Not the amount of people attending, but the number of buyers with whom you can have discussions and make sales.” 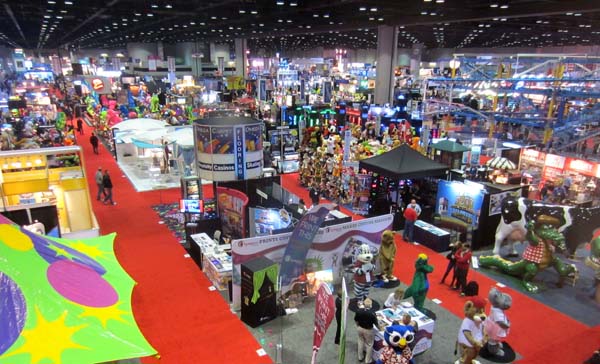 The expansive trade show floor, measuring 551,975 net square feet (51,280 sq m), was sold out as far back as September and the outdoor space was the largest in the event’s history. With slightly less exhibitors (1,098) than a few years ago, we can only assume they are now taking bigger booths as confidence returns to the industry.

Park operators seemed delighted with what they found: “This has been a fantastic show,” beamed Rick Knoebel, Knoebel’s Amusement Resort, Pennsylvania. “My dad [Dick] was inducted into the IAAPA Hall of Fame. We were able to introduce many new people to vendors and suppliers they had only heard about. I really liked the Strike-U-Up and Spin-U-Win from Skyline Attractions.”

“I came here looking for plush, souvenirs, rides, parts and equipment, and games,” explained Chris Maier of New Jersey’s Land of Make Believe, “If it wasn’t for IAAPA I couldn’t be in business today. It’s a good show. It’s like going to a super mall where all your amusement park and waterpark needs are under one roof.”

“For me,” said Matt Ouimet, the Cedar Fair supremo “the Expo confirmed the vitality of the industry and the quality of individuals who have chosen to commit their careers to this space. Specific to Cedar Fair, we had discussions with several companies that will undoubtedly make our guest experiences better, as well as our business results.”

Exhibitors were pleased with the gathering, too. “We’ve been extremely busy,” admitted Marko Schulze, Huss Park Attractions. “We have more projects in China, and Europe is coming back. The first day started slowly, but we’ve been busy for the past two days.”

“The show has been very good,” agreed Mondial Rides’ Froukje Knijpstra. “It could well be because of the economy. We’ve had some very good conversations with customers from throughout the world, including the US. Europe is still a little slow, but we’ve got new rides coming for 2015 and 2016, including our biggest ever observation wheel, which will go to France later next year.”

“It has been a great show for us,” acknowledged Rich Allen, S&S Sansei Technologies. “We’ve been extremely busy. What’s driven a lot of it is the 4D FreeFly for Six Flags Fiesta Texas.”

“The show’s been fantastic for us because of the Justice League ride vehicle we displayed for Six Flags,” noted Matt Kent over at the Oceaneering booth. “It’s an affordable dark ride option for regional parks.”

“This has been our first year with all our brands/acquisitions – Accesso, Lo-Q and Siriusware – together on one booth,” Accesso’s TJ Christensen informed us. “It’s been really good, and given us the opportunity to explain to clients how to deliver the digital guest journey, starting with the ticket purchase and then continuing with queuing, RFID, cashless etc.” 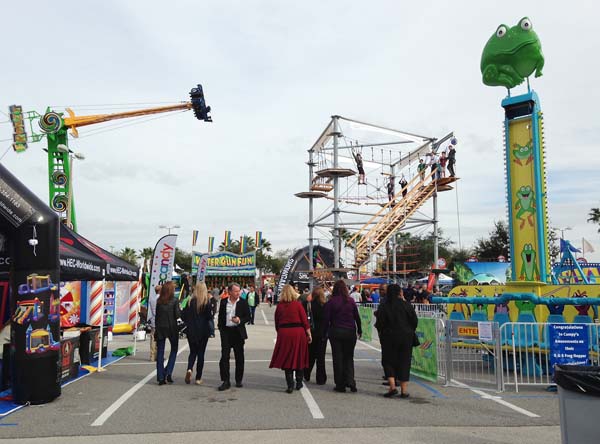 Intamin’s Sascha Czibulka described the show as “good. We’ve had very good discussions with clients from all over. We see many good friends at least once a year, however, it felt a little slower than last year. There were less Europeans and Asian than last year, due I think to the strong shows in Europe and Asia this year.”

According to Vekoma’s Peter Van Bilsen, his company is fully booked for 2015 and most of 2016. “It’s been a good show,” he said, “with a lot of meetings. People are here from all over the world, particularly Asia, Latin America, and North America.”

“This has been a very good show,” confirmed Guy Nelson, Dynamic Attractions. “A lot of parks in Asia and the Middle East are firming their expansion plans. The show allows us in one place to move those plans along and communicate. It also allows us to meet our suppliers for media-based attractions.”

“We showed several key clients some very new innovative concepts and technologies,” said Jim Seay of Premier Rides, “but we can’t yet disclose these to the public. It’s been extremely busy for the first three days, as we’ve been completely pre-booked. We arrived almost one week early for private meetings requested by our clients. The intensity of business globally cannot be understated.”

“Everyone busy, which is very different to three or four years ago,” noted JRA’s (Jack Rouse Associates) Clara Rice. “We’ve had a lot of meetings, and the projects seem real. There’s very much the attitude ‘Let’s do this now’.”

“Our conference rooms have been totally booked,” revealed Mack Rides’ Maximilian Roeser. “We’ve never had so many clients coming here. For three days our two rooms have been full.”

“We sold more than 25 attractions here,” announced Len Soled, Rides-4-U. “The economy helps. Everybody is in a buying mode. We’ve had traffic all four days. Also had a great show for SBF/Visa, S&S Sansei, KMG, and Eworks Pro LED lighting systems, all of whom we represent.”

“We’ve had a lot of interactions with parks serious about buying a new wood coaster for 2015,” Korey Kiepert of The Gravity Group informed Park World. “Tayto Park near Dublin, Ireland, will introduce one of Europe’s longest wood coasters. We will built a wood switchback coaster for ZDT’s Amusement Park in Seguin, Texas. And we’ve partnered with Martin & Vleminckx on several wood coasters in China.”

IAAPA Attractions Expo will be back at Orlando’s Orange County Convention Center from 16 to 20 November next year. Sure up your 2015 schedule now.

Sunshine on a rainy day