How to make Halloween last all year long!

Who says a haunted attraction is just for Halloween? AtmosFear! Scare Entertainment’s Jason Karl tells us why he wants to keep his guests screaming throughout the year.

AtmosFear! was due to reopen its Scare Kingdom Scream Park in the north west of England this February for a three night Valentine’s Day celebration called L’aMortis – and more seasonal events are on the way.

Why did you decide to develop Scare Kingdom as a semi-permanent attraction?

We’ve been lucky in that Scare Kingdom has grown between 18 and 34% year on year, and that has proved to us that the market for this kind of entertainment is very strong. In 2012 we did a survey to see if our guests would be interested in a year-round attraction, and the feedback was very positive.

Based on the fact that there was very little like this outside of Halloween, we made the decision to build a haunted house as part of Scare Kingdom called Manormortis. It was created in such a way that the navigation through the house can be changed very easily and we can pitch it towards different demographics almost at the touch of a button. It is not open every day of the year, but the intention is that we utilise it for different seasonal events such as Valentine’s Day, Easter, Halloween and Christmas, then in the summer months we will open it as a child-friendly Mystery Manor type attraction.

We received a lot of praise for the level of theming, with one website even describing it as akin to a Disney haunted house. Better still, we had a medium in there and she said it’s haunted …even though it’s a brand new building! That’s possibly because it’s packed with hundreds of props and pieces of antique furniture. The plan now is to rent it out for photo shoots, TV recordings etc, out of season.

Why a Valentine’s Day scare attraction?

There is a tradition in America and also at some European attractions of opening over the Valentine’s period, a sort of date in the dark. We thought we would be the first in the UK to do it.

L’aMortis is quite different to other scare attractions because it’s completely dark. The experience is vampire based because it just lends itself to the theme because of TV shows like Twilight, you’ve got that sexy-scary experience. You navigate it with an electric candle that can be switched on and off by the scare actors, who have the choice of whether or not to plunge guests into total darkness. If there was a group with younger children then the light would remain on. We will be putting people through in groups of just two people though, so it takes away that feeling of security, and we will be dispatching a new group every 30 seconds.

The experience is being pitched and young adults and singletons rather than families. It would make a great first date – you can grab hold of your partner or find a new one in the dark as you cling to each other in fear! And you’ll have plenty to talk about afterwards.

You are reopening the ‘controversial’ Psychomanteum at L’aMortis. Was all the publicity you received at Halloween good publicity?

Absolutely, we engineered the whole thing! We had been working on the Pyschomanteum concept for a few years but the time had never been right to launch it but we made the decision last Halloween, again based on research, that we would try an intense one-on-one encounter. A lot of American attractions already do it, but no one had really done it in the UK [except perhaps Project Fear by GNG in Sheffield – Ed].

We wanted to have a taboo element to it, but it had to be a believable scenario in terms of the narrative. The idea it is that it is this clinic where patients undergo aversion therapy by flooding, where you are you flooded with what you like in order that you no longer like it. This is a well known psychological treatment, particularly in the Victorian era but even in scientology today. We took the idea of sexual deviance, and a lot of the content is of a deviant nature but it does not include and will never will include elements of rape or any of the other extreme things that were placed into the press. I should say that both the people that were quoted from the rape charities had not seen it or and have not visited us.

It’s totally different to Scare Kingdom, it’s a 13 hour scare experience with accommodation, food and live entertainment including a variety of interactive scare games, street theatre and in-tent scares. The type of demographic we get includes the scare addicts, obviously, but also people who go on adventure holidays and do extreme sports, people who perhaps aren’t normally interested in scare attractions but like horror and want to be immersed in the experience. It is coming back this summer for its third season.

Do you believe a fully permanent scare attraction would work in the UK outside, say, London or Blackpool?

The way that these kinds of attractions are marketed is by having a hook, some kind of macabre element that you can latch onto, and that is fine in short bursts of a week or a couple of days or whatever. Fear in Brighton shut after just a few months. Pasaje del Terror in Blackpool is open for about nine months a year, but then Pasaje del Terror in London closed within a year. If you can’t do it in London where can you do it? I don’t know how successful the London Bridge Experience and London Tombs are, but they have undergone a change of ownership within the past year. Then there is the Dungeons, and they work well, but there is more of an educational component to them and I think that is part of why they work.

In the States I think the form of entertainment is more accepted and part of popular culture, whereas in the UK people are still constrained to thinking about Halloween. That may change, but for now it’s still very seasonal. We hope things may be different, however, in Portugal, where somewhere as vibrant as Lisbon should be able to sustain a year-round attraction.

What else is coming up for AtmosFear?

At the moment we are in the final stages of the attraction in Lisbon, which will open in April and is called Labirinto Lisboa. We are the producer and the client is an entrepreneur who has had this vision for a long time. It’s a huge permanent scare attraction with a lot of investment and a historical narrative based on myths and legends of Portugal. In every attraction we produce there is some kind of story; people enjoy it, they get more involved online and ultimately come back to visit you again and again.

We will also be opening up part of the Manormortis building later this year as a horror dining experience set inside a Victorian ballroom, featuring a live stage show based on the Grand Guigno French theatre style. We are going to re-imagine it for a contemporary audience, it will be very gory and we are going to play to corporate groups, team building exercises etc. In fact, we’ve already got a wedding booked! 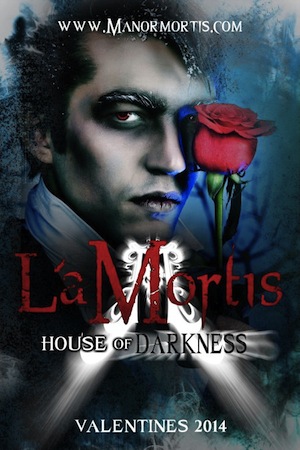 A date with a difference!

Located at Hawkshaw Farm Park near Blackburn, Lancashire, Scare Kingdom opened as a walk-through Halloween attraction in 2009 and has returned as a seasonal fixture every October since. Last winter, AtmosFear! upped the ante by adding a permanent haunted house called Manormortis, which has since opened as a festive theatre experience called Christmas FestEvil and was set to return for Valentine’s Day as L’aMortis, before reopening in the summer as a more family-friendly attraction.

Billed as a “sexy and spine-chilling celebration”, L’aMortis features a maze of 24 haunted environments plagued with vampires. Issued with remote-controlled electric candles operated by the performers, guests will be plunged into complete darkness at multiple points during the attraction. What could possibly go wrong when the lights are off?