Meet Hilda, the taking goat. This computer-generated character interacts with guests and is one of several animated animals available from Living Pictures of California.

“Every child dreams of entering the world of their favourite animated stories,” says Living Pictures’ Chiari Perin. “With our attractions, guests engage in a live conversation with the characters they love the most. This lasting one-of-a-kind experience builds a lasting relationship between you and your guests.”

Already employed by one of the industry’s biggest names, Living Pictures’ technology employs real-time lip synching and a simple controller to bring an actor’s voice to life through the animated on-screen character, complete with customised facial expressions.

Thanks to a discreet in-theatre camera, the actor is also able to watch the audience and deliver personalised messages to viewers, much to their joy and amazement. This spontaneous animation is delivered by video or the internet, meaning the actor does not even need to be on site.

Hilda the goat (seen above) was used for marketing a children’s book, while a horse called Zhed (pictured below) was developed as an attraction for for an equestrian park in Dubai. Several other custom characters have also been produced for various clients.

Living Pictures is a division of the high-end animation studio 3Dsite, whose film credits include The Matrix, The Core and Looney Tunes: Back in Action. The company anticipates the interactive system being used in standalone attractions and live shows, and for broadcast, internet and mobile use. During a demonstration at the recent IAAPA Attractions Expo in Las Vegas, many visitors did not even notice the video camera in front of them.

“It’s quite easy for us to hide the camera, but people are so desensitised to cameras now anyway,” observes Perin. “And you know what? I think they actually want to believe the character they are seeing is real.” 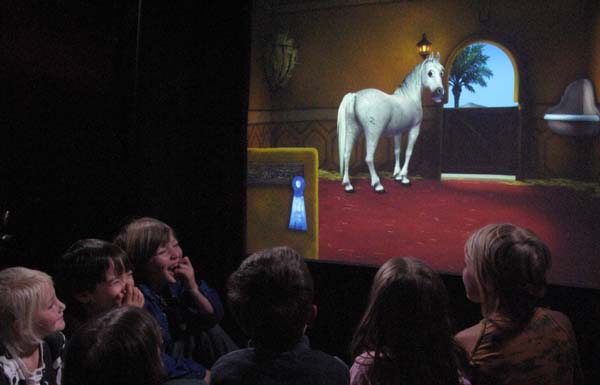