Maja’s Blumenturm (Flower Tower) is a new family tower ride featuring Maja the Bee, while Flip der Grashüpfer is a pony-trekking style ride featuring the grasshopper from the same TV series. Both will launch in the summer. In the meantime Holiday Park guests can enjoy a new jumping frog ride, a Tabaluga-themed ride and a driving school featuring existing park mascot Holly the parrot.

Also new for 2011 are some dancing fountains, plus meet-and-greet opportunities with Maja, Wickie the Viking and Tabaluga. Studio 100 is also retheming the park’s 70-metre Ride Trade tower ride as Anubis Free Fall Tower based around its teen TV drama The House Anubis. 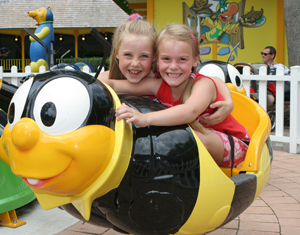 Evaluation of the waterslide experience in terms of biometric parameters