Hide it to ride it 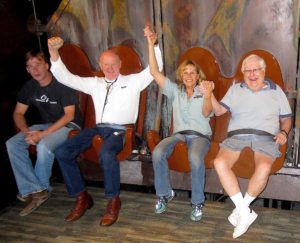 When a park operator adds a drop tower, one of the benefits is that it changes the skyline of the park. It towers imposingly over the adjacent rides, intimidating guests by its sheer height. Part of the thrill is being lifted to an extreme height before plummeting earthward. It’s a beacon to thrill seekers. So why would someone bury a tower?

That’s exactly what Steve Beckley, co-owner of Glenwood Caverns Adventure Park did, and the result is spectacular. His venue is in Glenwood Caverns Adventure Park, 160 miles (257 km) west of Denver and 7,000 feet (2,134 m) above sea level in the Rocky Mountains. In fact, it is atop Iron Mountain, reachable by the scenic Iron Mountain Tramway or open-air Adventure Vehicles. So rather than perch his new drop tower above the mountain, he blasted a 110 foot (34 m) mine shaft and lowered his tower into the hole. Then he covered it with a miner’s shack and themed it as the Haunted Mine Drop. A dark ride in a hole in the ground. Brilliant. Certainly shouldn’t have trouble keeping it dark.

Just so you understand, they can’t build an underground drop tower in Orlando. You dig three feet, it fills with water. And alligators. But high in the Rockies? Not a problem. I can’t imagine many parks that have the location to do so.

It’s not often someone comes up with a new idea, a new concept. There are dark rides and there are drop towers, but with the exception of Disney’s Hollywood Hotel Tower of Terror the two attractions were never destined for each other, at least until now. But an underground drop tower? It’s also both the world’s shortest (2.5 seconds) and tallest (110 feet) dark drop tower. Steve Beckley thought outside the box and came up with a radical ride concept that works. He had some help. Stan Checketts’ Soaring Eagle built the Drop Tower. Mark McDonough’s Creative Visions themed it, adding a Pepper’s ghost illusion to enhance the experience. Steve’s wife Jeanne cut the ribbon.

The theme pays homage to Colorado’s mining industry. As guests approach the shack, they feel like they’re entering a mine with narrative and characters to introduce the story line. They’re seated, strapped in, and entertained as ghostly miners appear and tell tales of a mining tragedy from long ago. They are assured that the mine elevator they are about to take has been inspected and is almost certainly reliable. That’s a bold-faced lie. This will be their ultimate elevator nightmare. They don’t realize that the floor has slid out from underneath them until they drop deep inside the mine shaft. Skeletons of unlucky previous visitors appear at the bottom to continue the tale, and then the ride returns to the main level for exit. It’s a one-of-a-kind experience that everyone who entered enjoyed. Or at least survived.

I rode it a couple of times, pictured above, along with (left to right) Mark McDonough, Stan Checketts, and Jeanne Beckley. The terror of the drop is enhanced by the darkness and the rapid drop in temperature as you descend into the mountain. It suddenly smells earthy and feels cold and damp, just like the perfect haunted mine drop should.