After success with its Babylon family entertainment centre (FEC) concept in Kazakhstan, the Agat Asia group has opened its first outlet in Russia.

Happylon Moscow was designed by KCC Entertainment Design, and is one of several Russian FEC projects currently on the go for the Belgian firm.

KCC was also responsible for the design of the five existing Babylon FECs in Kazakhstan, each of which is integrated into a shopping mall (two in Almaty, two in Astana and one in Aktobe). The Happylon concept was designed especially for the Russian market and, according KCC managing director Yannick Maes, provides a more sophisticated offering than many of Moscow’s other FECs.

After a successful three-month construction period, the project soft opened on December 25 at the city’s Filion Mall. Attractions include a custom family coaster from Vekoma that goes through the roof, plus Italian rides such as a Slingshot, Hammer Swing (Frisbee), Wave Blaster, Family Swing, Carousel, Jump Around, bumper cars and a “5D” theatre.

At 6,500 square metres Happylon Moscow is the largest indoor entertainment centre in Russia, and the first of what its developers hope will become a chain of FECs across the country. 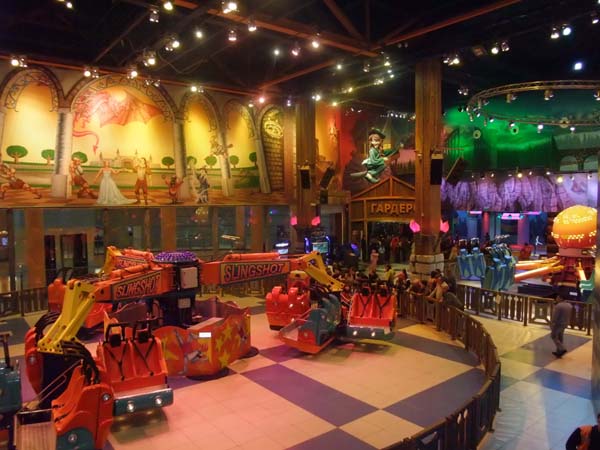 Hapylon Moscow might be Russia’s largest indoor entertainment centre to date, but KCC is currently working on the concept design for what is believes will be the biggest on the world.

Colosseum Fun Arena will be a full size replica of Rome’s famous Coliseum, complete with a glass roof. Inside this 100,000 square-metre space will be a nightclub, bowling alley, ice rink, mini golf and food court.

Rides will include a Maurer spinning coaster, log flume and a selection of family and thrill rides. The ice rink will have its own entrance so that it can be used as an event centre.