Alllou! Fun Park in Athens has opened Greece’s first scare attraction. The House of Fear was created by the UK’s AtmosFEAR! Entertainment Group (AEG), and will open year round.

“Creating the first scare attraction for Greece has been an interesting journey for the AEG team,” says creative director Jason Karl. “With no obvious cultural benchmark or point of reference we had to develop a theme which the Greek audience could relate to. After exploring several ideas we decided we would challenge guests to endure a series of disconnected nightmares featuring claustrophobia, total darkness, demonic possession, blood sacrifice, being burned alive, cannibalism, murder and inanimate objects coming to life.”

This fun for all the family experience was launched this winter with a nationwide media campaign, which generated queues of over three hours on busy nights. Three casts of performers (33 in total) have been recruited and underwent special training at a three-day “Scream School” in Athens. The attraction has been designed with a variable throughput to allow for high to low season operation. 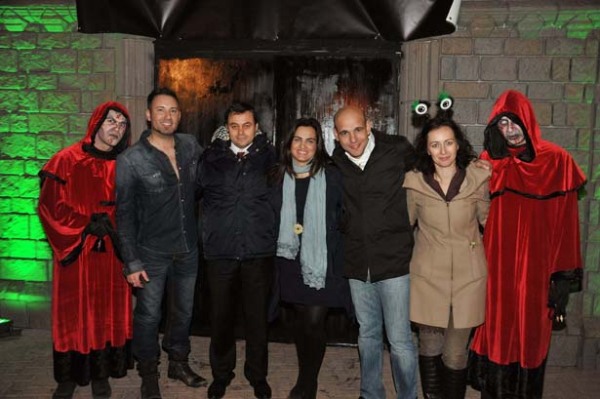 “Each environment is vaguely related to its predecessor which creates cohesion, but we can adapt and add different scares, environments and characters as the attraction evolves to keep it fresh,” adds Karl.

“The AtmosFEAR team worked tirelessly to create the attraction in only a few weeks,” notes Allou commercial director Vaya Klingou. “They did an excellent job in training the scare actors and making The House of Fear the talk of Athens.”

Allou! Fun Park welcomes more than three million guests a year. The House of Fear represents the 47th scare project for AtmosFEAR in its 11 year history, but its first outside the UK or Ireland. Its regular Halloween “haunt” is Scare Kingdom in Lancashire, England.