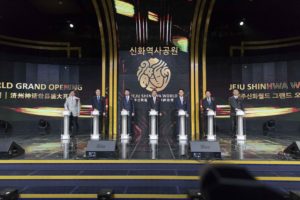 The grand opening ceremony was held at the Landing Convention Centre and hosted by Dr Yang Zhihui, Chairman and Executive Director of Landing International. Among the guests were a number of other industry professionals and business partners.

Spanning a total area of 2.5 million square-metres, Jeju Island – an already popular garden isle – possess potential for future development. Jeju Shinhwa World will introduce luxury hotels, theme parks, facilities for catering, and gaming and leisure activities to the isle, and the Shinhwa Waterpark is scheduled to commence operation in the summer of 2018.