The co-founder of Phantasialand in Brühl, Germany, passed away on July 6, aged 76.

Gottlieb Löffelhardt was born in Berlin in 1934 into a major fairground family. In 1967, together with the puppeteer Richard Schmidt, he opened a simple fairytale-themed park near Cologne. New attractions followed steadily and the park gained a reputation for its theming and attention to detail, leading Schmidt and Löffelhardt to pick up a Chinese culture medal in recognition of the China Town area they created in 1981.

While Schmidt, who Phantasialand in the 1990s, was viewed as a creative force behind the scenes, Löffelhardt maintained a hands-on approach as owner-entrepreneur, a legacy surely from his days as a travelling showman.

In 1996 the Löffelhardt family partnered with Giancarlo Casoli, owner of the ride manufacturer Preston & Barbieri, to take over the Italian park Mirabilandia, where they successfully grew attendance after a period of sustained investment.

Gottlieb Löffelhardt retired in 1998, handing control of Phantasialand to his son Robert. Mirabilandia was sold to Parques Reunidos in 2006. Today Phantasialand attracts over 1.8 million annual guests and features six themed lands together with two on-site hotels and extensive conference and corporate hospitality facilities.

Speaking last September at Euro Attractions Show’s European Theme Park Legends panel session in Rome, Löffelhardt Snr raised the issue of consolidation: “With big companies running parks the danger is they all become the same. I think some parks will come back into private ownership.“

The operation he established in Brühl is testament to the kind of idiosyncratic park that can be created with the freedom afforded as a family business.

Below: The Berlin-themed street at Phantasialand 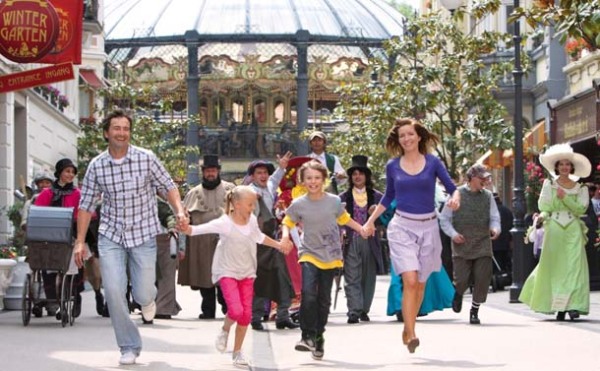