Google in the park

A number of theme parks have recently been captured in digital form by Google, allowing users of Google Maps to take a virtual tour via the “Street View” function.

Pictured above is one of Google’s camera-equipped triciycles, capturing footage of the leading Dutch park Efteling.

Over in the States, nearly every inch of Busch Gardens in Tampa Bay were mapped by Google. The images gathered were blended together by Google to create interactive and completely moveable 360-degree scenes.

“We’re thrilled to be among the first theme parks in the world to get the Google Street View treatment,” says SeaWorld Parks & Entertainment’s Joe Couceiro. “Now, no matter where you are, you can enjoy an online experience of our parks including seeing their scope and diversity while planning your vacation.”

Google Maps began including Street View images in 2007. More than a dozen countries and over one hundred cities now can be seen online. Other SeaWorld Parks & Entertainment properties featured include SeaWorld in Orlando, San Antonio and San Diego, Discovery Cove and Aquatica in Orlando, Busch Gardens and Water Country USA in Williamsburg, Virginia, and Sesame Place in Langhorne, Pennsylvania.

Below: Busch Gardens in Tampa as seen on Google Maps. 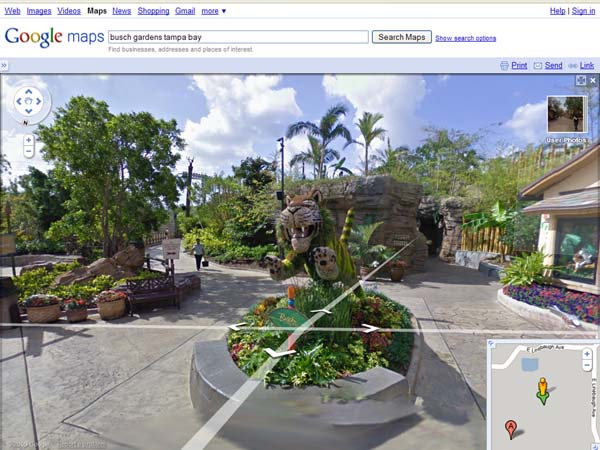