Gone to the dogs 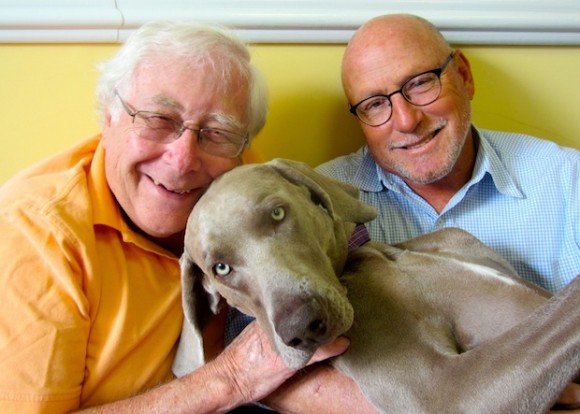 Recently I visited Morey’s Piers in Wildwood, New Jersey, and met the newest member of the Morey Organization, Hobbs Morey, a Weimaraner. The photo is of Jack Morey, Hobbs and me. Jack is on the right. Hobbs is a wonderful addition to the Morey family.

Wildwood is a dog-friendly town. Although dogs are not allowed on the boardwalk during the season, there is a designated beach for dogs one city block wide and 1,500ft (almost half-a-kilometre) long boasting a 25ft-tall (8m) hydrant painted bright red, made of recycled parts from an old slide tower. It was donated to the city by the Morey Organization to “mark” the location of the new beach. It makes the dogs feel right at home. It also pays tribute to the Wildwood Fire Department and two volunteer fire units. Leashed dogs are welcomed on the beach. Due to crowds during the summer months, it would get a little hectic with all the good smells and people walking on the boardwalk with dogs. But at the end of the season, dogs are allowed to walk on the boardwalk.

Also at the end of the season, Morey’s Piers open its Raging Waters waterpark (or “water bark”) for “Gone to the Dogs” day. During this puppy pool party guests and their dogs can float down or swim in the Adventure River, play in the fountain pool or just lounge around and dog watch. There’s even a doggie swimsuit contest (watch out Miss America). In the evening there are water bowls and treats stationed throughout the park. They call it “yappy hour”. After a day at the park, all dogs get a Morey’s tennis ball. All the proceeds go to the dog beach and the New Jersey Society for Prevention of Cruelty to Animals (NJSPCA).

I also visited Knoebel’s Amusement Park, where dogs are allowed, too. I saw mutts of all sizes, small, medium, large and a few in strollers being wheeled around by their owners. Some were sharing lunch with their owners and just having a wonderful time out in the park. I rode the train ride and a dog owner and his best friend were also on board. Both seemed to enjoy the scenery and wind in their face. Dogs are also welcome on the Antique Autos ride and on the park’s Grand Carousel if they sit in the chariot. Four paws to Knoebels.
At Waldameer Park, there’s a doggie water fountain next to the human fountain. As Paul Nelson of Waldameer told me, “We are a family park and dogs are part of the family. They’re welcome in the park.”

In Ocean City, New Jersey, the town celebrates the end of tax season with the Doo Dah Parade. The highlight is at the end of the parade, when 500 to 600 basset hounds waddle down the boardwalk. Some are in costume, some in floats. There is even a pooped-out float for lazy dogs. There was a basset dressed as a butterfly with wings, a ballerina, and my favorite, Sherlock Holmes )Sherlock Bones?). During the weekend, there’s a picnic and Basset Olympics. Treats are flowing, hamburgers and hot dogs cooking, and noses up in the air following the smells.