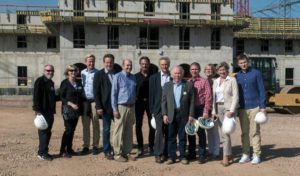 Managing directors and well-known representatives from around 45 of the world’s leading theme parks (including Walt Disney Parks, the Universal Resorts and successful parks in Asia visited Europa-Park this week to visit the construction site of the new water world, Rulantica.

Paul Noland, current IAAPA Chairman Greg Hale, his successor Andreas Andersen and colleagues were particularly impressed by the gigantic park expansion in the southeast of the municipality of Rust, Europa-Park reported. During their visit to the site of the new 4* themed superior hotel Krønasår and the future water adventure resort Rulantica, Europa-Park owner Jürgen Mack and Michael Mack, managing partner, presented the extensive work to approximately 45 guests in the 450,000 square meter extension area.

In addition to a flight on the Voletarium, guests were treated to a tour of the Ireland – Children’s World themed area, a journey on the award-winning themed ride Arthur – In the Minimoys Kingdom, and a ride on the thrilling Alpenexpress Coastiality. Executives were also shown the Park’s 8,000 square meter logistics center, Horror Nights – Traumatica.

A Drop in the Ocean