Glenwood Caverns Adventure Park to be powered 100% by renewable energy 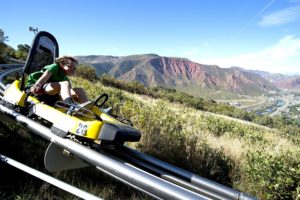 Glenwood Springs, Colorado, has joined an elite group as it becomes the seventh city in the U.S. to be powered by all renewable energy. The city is now purchasing all of Glenwood Springs Electric’s electricity from clean wind power from the Municipal Energy Agency of Nebraska (MEAN). As a result, Glenwood Caverns Adventure Park is now fully powered by renewable energy.

Glenwood Caverns Adventure Park, which is well-known for its cave tours and over-the-top extreme thrill rides, was one the first businesses in Glenwood Springs to take advantage of Garfield Clean Energy and City of Glenwood efficiency rebates and install LED lighting within the caves, an innovative project that garnered statewide publicity. There were multiple benefits. In addition to cost effectiveness and sustainability, the LED bulbs put off less heat, which makes it easier to keep the 54 unique species residing in the cave alive. They also last longer, which means less servicing to change bulbs in the fragile environment.

The City’s switch to all renewable makes Glenwood Caverns Adventure Park one of the first amusement parks in the nation to use 100% renewable electricity, a move that makes owner Steve Beckley proud.

“Our business is centred on nature-based adventure, so protecting the environment and natural resources has been our primary goal since we gave our first cave tour in May 1999,” explained Beckley, who owns Glenwood Caverns Adventure Park with his wife Jeanne. “We are really pleased to be one of the first theme parks in the U.S. to have all of its electricity provided from renewable sources. Sustainable tourism is an important issue these days, and this move is a huge step in the right direction for Glenwood Springs as a whole.”

Located at the confluence of the Colorado and Roaring Fork Rivers, the historic resort town of Glenwood Springs is midway between Aspen and Vail in the heart of the Rocky Mountains. Accolades abound for this city with an elevation of 5,746 feet and a population just under 10,000.