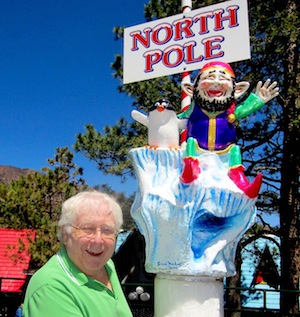 Since 2014 it is legal to buy cannabis in Colorado, but I much prefer adult beverages to Mary Jane.

Nevertheless, I went to Colorado last summer to get high, the higher the better. I wanted to ride on some of the highest amusement rides in North America. Colorado has several parks located over 5,000 feet. Thin air, here I come.

I actually mapped out my trip to minimise driving distances, but for purposes here, let me describe what I found in ascending altitude. First stop was Elitch Gardens, located in downtown Denver at just about 5,280ft (1,609m) above sea level. It’s been about 20 years since I visited Denver. That was just before Elitch’s was moved to its current location, so the park was all new to me. I was delighted to find that my friend, Chris Thorpe, was the park’s GM (he’s since returned to Darien Lake.) Rode several of the coasters, but the highlight was the newest ride, Brain Drain. It’s a 73ft-tall Giant Loop from Larson that sends up to 24 riders forwards, backwards and head-over-heels in a 360° revolution. Similar rides are planned this season for Darien Lake, New York, and Six Flags parks in New Jersey, Georgia, Maryland and California (Discovery Kingdom).

Ascending perhaps 10ft (3m) in altitude and across town is the venerable Lakeside Amusement Park. Infrastructure improvements are high on the agenda for its upcoming this 107th season of operation but park owner Rhoda Krasner has also added three new family rides. The park’s art deco architecture and classic neon lighting reminded me of my own childhood park, the now-defunct Crystal Beach.

Now celebrating its 35th season, Water World in the Denver suburb of Federal Heights is one of America’s largest waterparks. It’s a hilly site, but I’m sure a portion of the park is about the 5,300ft mark.

Across the continental divide, 157 miles (253km) west of Denver and perched at an altitude of 7,160ft (2.18km) on the side of Iron Mountain, the panoramic vistas from Glenwood Caverns Adventure Park are picture perfect. Access to the park is by the 4,300ft-long Iron Mountain Tramway cable car. I got higher by climbing onto the big chair pictured here. Owner Steve Beckley has installed the Cliffhanger rollercoaster, the highest located coaster in America, that took me 50ft (15m) higher to 7,210ft. A ride on the Giant Canyon Swing launched me out over Glenwood Canyon, 1,300ft (396m) above the Colorado River. The park is also home to the first and longest alpine coaster in the United States, by Wiegand, measuring 3,400ft (1km).

I made one more stop, to Santa’s Workshop North Pole in Cascade, outside Colorado Springs. This is a Christmas-themed family amusement park where I got to ride America’s highest altitude Ferris wheel at 7,500ft. New last season, owner Tom Haggard added Santa’s Sleigh, a Soaring Eagle zip line, so I climbed aboard. I’m back near sea level now, but visiting Colorado’s parks was a high point of the year.