The coming year promises to be one of Gerstlauer Amusement Ride’s busiest ever, with nine new projects underway.

Among these will be the German manufacturer’s largest rollercoaster to date, an as yet unnamed launched Euro-Fighter ride for a park in Asia, standing 43-metres tall.

“We were very pleased with our first launched Euro-Fighter, which opened at Hansa Park in Germany in 2008,” says the company’s managing director Siegfried Gerstlauer. “From a guest perspective, the launch and beyond-vertical drop are outstanding. This coaster will also feature our four-tube track, which will save our customer’s considerable expense when it comes to foundation costs.”

In America Gerstlauer will open several rides according to Adam Sandy of the Ride Entertainment Group, which handles Gerstlauer’s projects in the Western Hemisphere. These include two Euro-Fighters, namely Dare Devil Dive at Six Flags Over Georgia outside Atlanta and Untamed at Canobie Lake Park near Boston. Gerstlauer has also designed and built three new trains (as pictured above) for the Texas Giant wooden coaster, currently under refurbishment at Six Flags Over Texas. Designed to resemble a 1961 Cadillac, the ride vehicles have custom-designed seats to handle the coaster’s extreme forces.”

In Europe, the company is supplying two 30ft-tall family coasters, one to Hansa Park, and a second to be confirmed, an unannounced coaster for Movie Park in Germany, a 16-metre-tall custom spinning coaster for Belgium’s Plopsa Coo, and a 33ft-tall family shuttle coaster for Ruhpolding in Germany.

Pictured below: The track layout for Dare Devil Dive at Six Flags Over Georgia 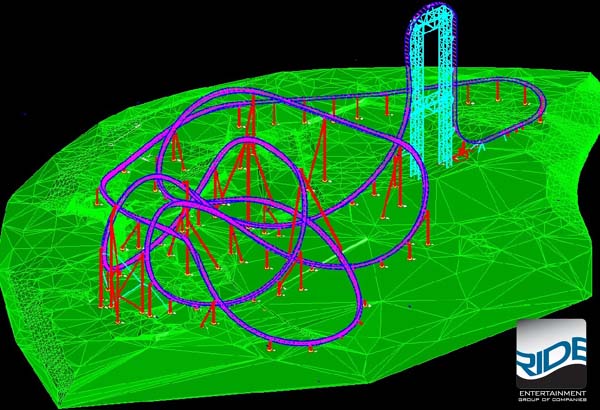