Scandalous! Orlando, Florida, the epicentre of the amusement park world, didn’t have a wooden rollercoaster. Until now. Paul Ruben reports.

Fun Spot America (FSA), located just off International Drive (I-Drive) on Fun Spot Way has added not one but two new rollercoasters, one wood and one steel. Both are part of $25 million expansion that FSA has been building since last September, as it grows from 5-acres (2-hectares) to 15 acres. A 250ft (76m) Skycoaster, three new thrill rides, a new food court, new ticket booth, additional parking and restrooms have also opened as part of the multi-million transformation. A 45ft-high go-cart track and a kiddie coaster are set to open in the near future.

“When I started Fun ’n Wheels on I-Drive in 1978, I never expected I would be having a 15-acre park with rollercoasters, just up the street,” Fun Spot owner John Arie Snr tells Park World. “But I knew that rollercoasters would take our parks to a new level.”

Located in close proximity to Universal Orlando, Fun Spot America has free admission and free parking, and visitors can either pay per ride or buy an all-day wristband. A second, nine-acre park is located off Highway 192 next to Old Town in Kissimmee (near Walt Disney World). In November 2012, IAAPA named FSA the Best Family Entertainment Centre in the USA. But now it’s grown up. This FEC has become an amusement park.

“For over 10 years we tried several times to buy the adjoining 10 acres for expansion,” relates Arie. “But for pricing issues, we never could and it was sold to a third party to build apartments. After the economic downturn, the property was back on the market. In 2010 flippantly we offered him the lowest price ever, and he took it! Then we had to design the park, borrow the money and build it. I can only characterise it as God opened every door necessary and now we have our baby, Fun Spot America.”

The park now boasts a total of 21 rides and attractions, but it is the new rollercoasters that highlight its offering. White Lightning, a wooden coaster with steel super structure is strategically positioned to be seen by drivers on the nearby highway, Interstate-4. Built by Great Coasters International, the track is 2,032ft (619m) long, more than 78ft high (24m) and reaches a speed of 48 mph (77kmh). It contains 12 off-your-seat moments during its 42 seconds of high-speed ride time. It’s a joyful trip that invites repeat riding.

“We chose Great Coasters because of their history of success, proven Millennium Train and stellar industry reputation,” explains Arie. “I wanted a wood coaster that had thrills and re-ride-ability. On a scale from one to 10, they delivered an 11! The track length and almost 80ft drop develops an incredibly smooth yet thrilling ride. We have a winner!”

“I wanted the second coaster to be totally different from the first,” offers Arie, “such as steel versus wood. I also wanted a middle-of-the-road high capacity proven coaster that was made in America. They delivered a 10 on a scale of 10! While the track was made in Wichita, the train was made in Holland. They were absolutely great to work with.” 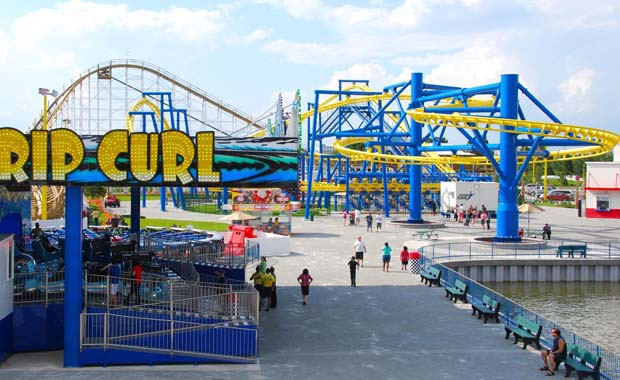 Those other new attractions include a fifth multi level go-kart track built in-house, a 250ft Sky Coaster arch by F3 Amusements, Rip Curl (Himalaya) by Wisdom Rides, Tilt-A-Whirl from Larson International and a Schwarzkopf Enterprise, formerly at Six Flags Over Georgia. The SkyCoaster is the world’s second largest; the largest can be found at Fun Spot’s sister park in Kissimmee.

With the expanded park just having opened, Arie can only speculate on how his new coaster arsenal will affect his Orlando operation. “I don’t know for sure, but if history repeats itself, the addition of a rollercoaster is a game changer. And we added three in Orlando!” Just coincidence, but both Walt Disney World’s Magic Kingdom and Universal Studios Florida also have three.

“We provide people with a great alternative [to the big parks], both the tourists and the locals,” adds Arie. “You can come for a ride, a couple of hours or all day. People are looking for these options, and for value.”

Expanding Fun Spot America was not easy, according to owner John Arie Snr. There were many challenges, but for every problem there was a solution. “That formula equals success,” he smiles. “After nine to 10 months of design and getting permits, the city officials and bureaucrats got to know every minute detail of our civil and building project. So we go pay our hundreds of thousands of dollars in impact fees, traffic studies, compliance issues, and seven different building permits to start construction. The bulldozers are pushing dirt, dump trucks are moving in fill and 100 or so tradesmen are on the site awaiting their part of our project. Then a lonely environmental inspector shows up and stops the entire project! Why? We didn’t have a $50 tree removal permit. We had to stop everything, I mean everything, and run down to the city to buy the ‘tree removal permit.’ Luckily we only lost a half day of initial production but the inspector was happy.” 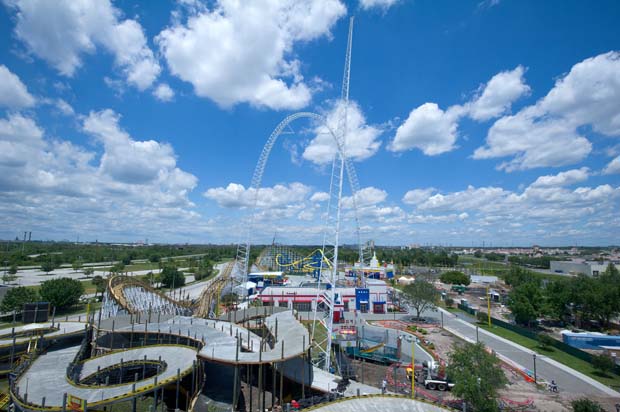