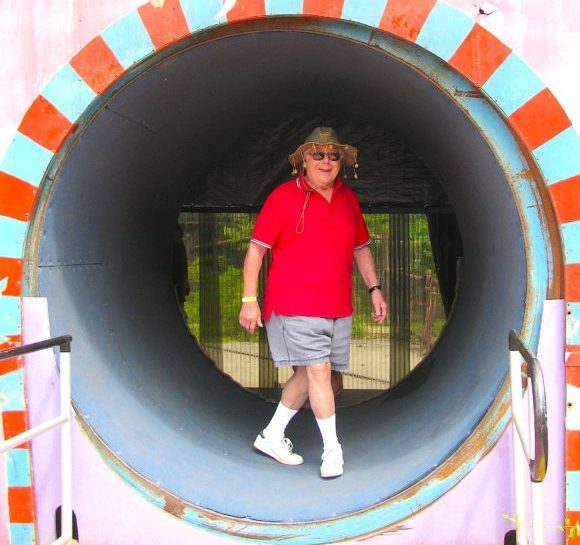 In the old days, just about every park had a fun house filled with crazy things to do, writes Paul Ruben. Today most of them are gone.

This used to be a fun house But now it’s full of evil clowns
It’s time to start the countdown
I’m gonna burn it down, down, down
– Funhouse by Pink, 2008

Many traditional fun houses were removed after parks created walk-throughs. Some became dilapidated and were torn down. A few burned down. Those that remained were all at traditional local amusement parks and died when those parks closed. No theme park ever created a traditional free-form stay-all-day fun house. A few traditional fun houses are still operating in Europe and Australia. I grew up in the era of fun houses, specifically the Magic Carpet at Crystal Beach, Ontario, and I miss them.

Unlike thrill rides, fun houses like the Magic Carpet were participatory attractions, where guests entered and moved around under their own power. Like a playful obstacle course, fun houses would seek to distort conventional perceptions and startle people with unstable and unpredictable physical circumstances.

Appearing originally in the early 1900s at Coney Island, the fun house was a house or larger building containing a number of amusement devices. At first these were mainly mechanical. Some could be described as enlarged, motorised versions of what might be found on a children’s playground. There was often a slide, taller and steeper than one would find on a playground. A large spinning disc would dislodge riders with centrifugal force, liability laws be damned. A horizontal revolving barrel like the one shown here at Palace Playland in Old Orchard Beach, Maine, would challenge guests to walk through without falling down. I’m skilled at this. You might find floor tricks like sections of floor that undulated up and down, tipped from side to side or moved forward and back, either motorized or activated by the person’s weight. Stairs that moved up and down, tipped from side to side, or slid side-to-side in alternating directions between steps. What young man didn’t enjoy watching compressed air jets shooting air up from the floor, originally designed to blow up women’s skirts? The jets were also effective at startling almost anyone and making them jump and scream. There was usually a variety of distorting mirrors, perhaps a large ball pit.

Traditional fun houses gave way to walk-throughs, where visitors followed a path until they emerged back on the midway. These preserved some of the traditional fun house features, including various kinds of moving floors, a revolving barrel, a crooked room and dark corridors with various pop-up and jump-out surprises, optical illusions and sound effects.

But what about today’s modern theme parks? They celebrate the fun house in theme only. Hersheypark’s Laff Trakk and Six Flags’ Joker coasters are prime examples. But you know what? They’re not the real thing. The old fun houses were magical.

Santa Park – the Finnish attraction where it’s Christmas every day