The world’s tallest and fastest looping rollercoaster has opened at Six Flags Magic Mountain in California, bringing the park’s coaster count to a world-record 18.

From Premier Rides, the new triple-launch coaster features a record-breaking 160-feet diameter (49m) loop. Passengers face a first-ever launch up and over a “top hat” that traces the outside of the loop, plus a high speed acceleration on two forward launches, and one backward launch into and out of a tunnel.

“We are excited to add another world-record coaster to our existing collection of attractions,” says park president Bonnie Rabjohn. “Six Flags Magic Mountain is proud to build on our status as the Thrill Capital of the World.”

Full Throttle takes riders on a thrilling journey through the park’s distinctive mountainous terrain, on board three-car 16-seater sleek black and silver trains, each car seating six riders two-abreast. Leaving the station area, passengers are accelerated from zero to 70mph (113kmh), experiencing their first inversion as they teat through the loop.

The train then soars along the terrain-hugging track before entering into a high-banked right and left curve as it approaches the second inversion, a dive loop that drops rapidly into a tunnel. While in the tunnel, the train is dramatically decelerated and stopped, only to be suddenly launched backward up to the high point of the dive loop.

After a momentary pause, the train drops and is magnetically launched a third time, racing out of the tunnel and through a high G-turn to the left. Riders then race up and over a “top hat” that traces the outside of the world-record loop, where riders experience significant air time and a breathtaking view of the park before dropping down rapidly, decelerating and taking the final 180° degree turn left back into the station.

“Full Throttle uses the most advanced technology we have ever incorporated into a rollercoaster,” notes Premier Rides president Jim Seay. “The unique topography of the Magic Mountain site, combined with the desire to take riders right through the mountain in a tightly dimensioned tunnel, required precision design and engineering efforts and an innovative use of our magnetic launch technology.” 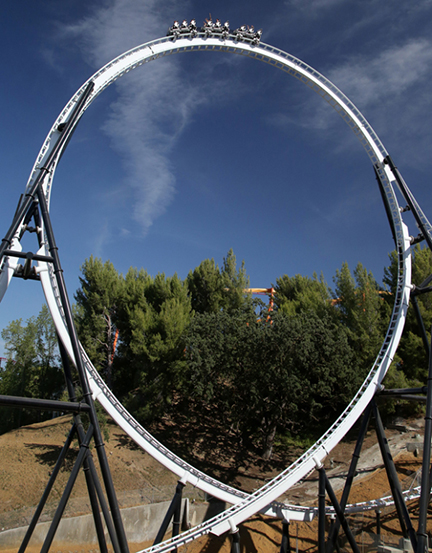 According to Seay, Premier’s launch system features the same type of technology being used by the United States Navy to catapult plans of its latets generation of aircraft carriers. In the case of Full Throttle, a new dual magnetic pulse system was engineered to allow multiple high speed launches with a reduced launch distance capability. Additionally, the equipment’s electronics are configured to direct magnetic pulses in both forward and reverse directions for an added thrill factor.

Full Throttle was officially opened to Six Flags Magic Mountain guests in late June. The thrill-packed park is located in Valencia, about an hour north of Los Angeles.

Six Flags Magic Mountain’s 18th rollercoaster is located near the front of the park in a newly themed five-acre area that includes day and night-time entertainment, two food locations and new shopping area. Full Throttle is the perfect addition to Magic Mountain’s extensive coaster collection, joining other adrenaline-pumping rides such as Tatsu, the tallest, fastest and longest flying coaster in the world (by B&M), X2, the world’s first 4th dimensional coaster (by S&S), Apocalypse, one of the next generation of wooden coasters (by Great Coasters International) and Goliath, the “giant among giants” mega coaster (by Giovanola). 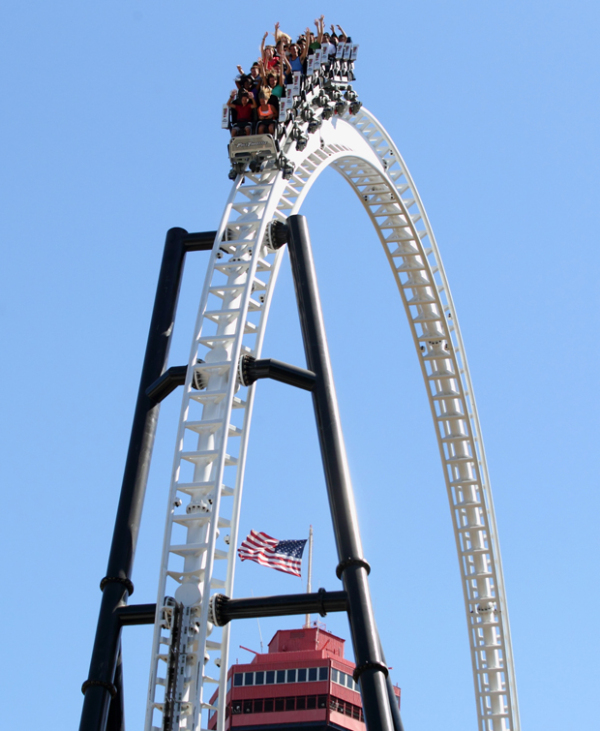