Around a year from now, Floriade 2012 will take place in the Netherlands. Here general manager Paul Beck and hospitality project manager Mark Wijman outline 10 reasons why the six-month-long world horticultural expo will run like a theme park.

We want to re-invent the horticultural expo. It is our goal to become a landmark attraction for horticulture in the same way that Disneyland became a reference point for theme parks. By borrowing from the park industry, we want to showcase horticulture in a theatrical way.

We’ve got a theme park masterplan. Though the city of Venlo’s original masterplan for Floriade was based around a “classical” expo, with two entrances and a linear layout, we have since turned this around and it will now feature the familiar theme park “hub and spoke” layout with a single entrance, a “Main Street,” and a central plaza surrounded by five themed areas. Each of these areas is designed with a visual anchor to draw you in. As well as the expected landscaping and horticulture, there will also be retail, restaurants and in most areas an entertainment area, whether a big amphitheatre or a small stage.

We will focus on the family market. Unlike most expos our marketing and communication campaigns will focus on families with kids up to 12 years.

Guest comfort comes first. Most classical expos are designed by looking at the site’s legacy and what will happen to its infrastructure after the event. While we do have a legacy plan in the form of Venlo Greenpark, a sustainable business park, this was not the leading factor in Floriade’s design. For example, our road infrastructure features paths that are between 3 and 8-metres in width, because this is what will be comfortable for our guests. Had we followed the legacy approach, we would have made the roads 25-metres in width. Working with BRC Imagination Arts, whose European office is located nearby in Eindhoven, we considered a wide range of factors during concept development to make the guest experience more enjoyable.

Visitor experience is paramount. Traditionally at expo events, each country or participant signs up for a pavilion or individual area, but little thought is given as to how they complement neighbouring exhibits. Working with the consultancy Vision XS, we considered the aspects that will engage our guests on an emotional and psychological level and developed a “visitor experience map” so that the experience is balanced across the site. We suggested, for example, that participants may like to add a water element to their exhibit to increase participation, and gave advice on theming, architecture, capacity and routing. In the interests of the guest experience, we also explained why it might make more sense if certain participants were located in, say, “C2” rather than “B8.”

We’ve got attractions! There will be a lot of different experiences available throughout Floriade, but several of our participants are exploring concepts for theme park style attractions like dark rides or water rides, and 3D/360˚ movies, obviously with a horticultural theme where possible. 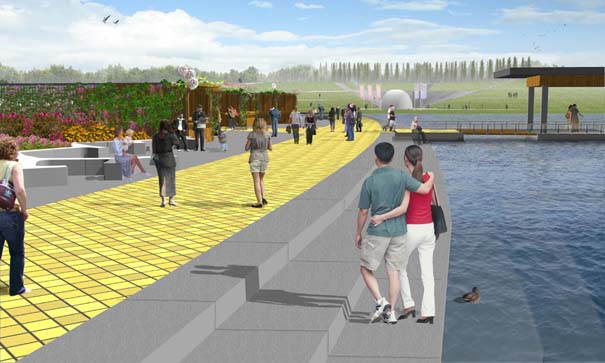 We’ve got people-movers. As for internal transport at Floriade, we will have a Doppelmayr cable-car system travelling over 1km (1,150 metres) from the north to south end of the site, as well as land trains circling the park. These tried and tested theme park products will keep our guests moving at all times!

We will feature a large live entertainment programme. Our studies show that only one hour of a typical visitor day is spent enjoying live entertainment, but those 60 minutes are responsible for 30% of the guest’s satisfaction. At Floriade we will feature six locations for live entertainment, including a 1,200 seat amphitheatre for large concerts, an indoor theatre and three smaller spaces near restaurants where we will showcase small concerts, DJs etc. In addition there will also be a lot of street theatre, roaming characters, mime artists etc. We really want to capitalise on this part of our offering.

We will have two park mascots. Our costumed characters Flora and Florian, a girl and a boy, have been developed together with groups from local elementary schools. In fact there will be a lot for kids to do at Floriade and each area will have its own themed play area close to a restaurant.

We are expecting theme-park level attendance! For our visitor projection and analysis we worked with AECOM, whose data confirmed that we are focused in the right direction, on target to attract 2 million paying guests (2.3 million attendance in total). That’s more than all theme parks in the Netherlands except the mighty Efteling!

A general manager with Efteling from 1989 to 1996, Paul Beck also served with Volkswagen’s Autostadt in Wolfsburg, Germany, while Mark Wijman has worked with Warner Bros Movie World (now Movie Park) in Germany and Kongeparken in Norway, as well as serving on IAAPA’s food & beverage committee. Floriade 2012 takes place in Venlo, The Netherlands, from April to September 2012. 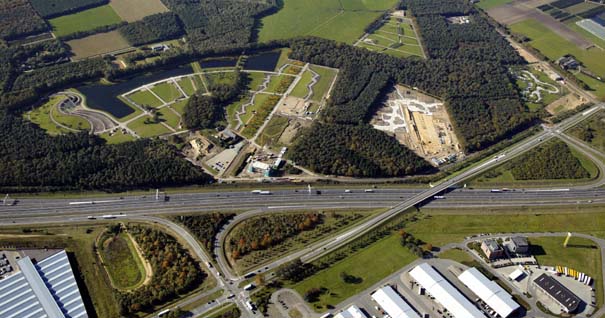