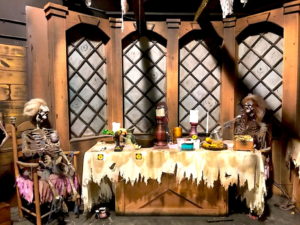 Six Flags Fiesta Texas, San Antonio, Texas, is kicking off the New Year in a big way with the theme park industry’s first new attraction of the year, a new dark ride debuting on January 1, 2019. Pirates of the Deep Sea is a collaboration between Six Flags Fiesta Texas and Magic in the Sky theme park suppliers to refurbish on old Sally Corp. Scooby-Doo dark ride. It is a gaming experience that pits the skills of guest buccaneers against a marauding band of plundering pirates who try to hornswoggle them out of stolen bounty.

“Innovation is part of the Six Flags DNA and this immersive, new interactive ride is packed with so many amazing special effects that guests will truly feel they are caught in the middle of a raging pirate battle,” said Park President Jeffrey Siebert. “The spell-binding storyline features dastardly pirates, scheming mermaids, and a ship’s ransom in stolen treasure woven into a competitive gaming adventure. This is a ride guests of all ages will want to experience again and again with family and friends.”

Guests board a weathered pirate ship, Man-o-War, to sail through the raging storms of the Bermuda Triangle. As they float past the eerie remains of ghost ships, riders are caught in the middle of a dramatic battle between their pirate ship and an angry mob of pirates port side. Riders will need to be quick on the trigger to blow the man down and defeat the swashbuckling scalawags. As they battle, guests compete with fellow shipmates by firing at hundreds of themed targets to tally a score of their victory at sea.

Pirates of the Deep Sea features include pirate galleon ride vehicles that seat four passengers and equip each passenger with their own personal musket to fire light beams at hundreds of different targets. There is dramatic audio in 18 different zones, broadcast from a total of 39 speakers, that follows the individual pirate galleons as they make their way through the perilous journey. Elaborate, three-dimensional scenery re-creates an old seaside village with a gigantic waterfall, moonlit alleyways, and hidden pirate’s treasure.

Pirates of the Deep Sea, located in Fiesta Bay Boardwalk, will be unveiled at the stroke of midnight on January 1, followed by a Grand Opening on January 12.