This coming spring, Canada’s Wonderland near Toronto will unveil the 306-feet-tall (93m) Leviathan, one of the biggest and tallest rollercoasters in the world.

The $28 million ride will dominate the park’s landscape, taking riders to breathtaking heights and speeds never experienced before at Wonderland. Leviathan is the first coaster designed and manufactured by Bolliger & Mabillard (B&M) to exceed 300ft in height. B&M also constructed the 230ft-tall (70m) Behemoth, which premiered at Canada’s Wonderland in May 2008.

The excitement on Leviathan will begin on the first lift hill as riders, seated in one of three 32-passenger trains with four-abreast seating, climb to that breaking height of 306ft (93.3m). What follows is an exhilarating 80º drop. Reaching a top speed of 92mph (148kmh), riders will experience extreme thrills on 5,486ft (1.67km) of track, including a series of giant camelback hills of up to 180ft (55m) and an overbanked hammerhead turn at 115º that will cross above the park’s front gate at 147ft (44m) high.

We will go higher, longer and faster than ever before when we launch Leviathan in 2012,” says the park’s vice-president and general manager Raffi Kaprelyan. “Leviathan will be our 16th coaster and now positions Canada’s Wonderland as one of the top three coaster destinations in the world.”

Construction is well underway at the park, with a completion date of May 2012. 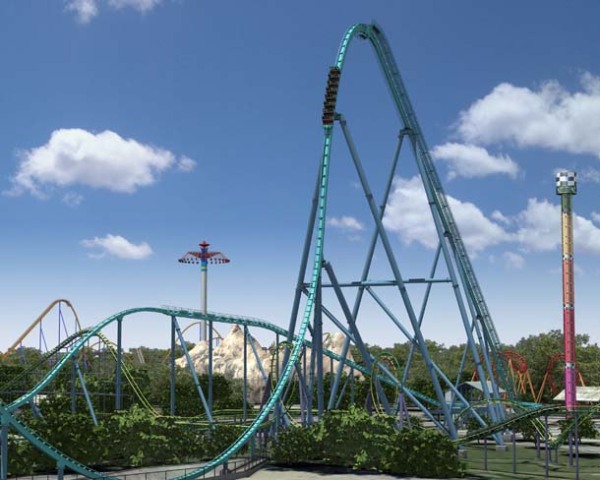