Still recovering from Superstorm Sandy 11 months earlier, on September 12 a fire tore through the boardwalk in Seaside Park and Seaside Heights, New Jersey – causing damage to local shops and businesses including Funtown Pier.

Four blocks of shops, stores, arcades and the dormant pier. Were all destroyed. The fire began in an ice cream store on the Seaside Boardwalk and quickly spread with the help of 30 mph (48kmh) winds. Nearly 50 businesses were destroyed in total.

The Funtown Amusement Pier in Seaside Park, closed this summer following Hurricane Sandy, was planning to return in 2014. The fire collapsed the pier into a smouldering heap. Caught in the fire and presumed lost were an SBF/Visa Midi Dance Party 360, a 100ft (30.5m) Skycoaster and an S&S Combo Tower, Tower of Fear. An indoor independent building adjacent to Funtown Pier burned to the ground. It was operated by Seaside Holding Co and inside was a 1990 Chance four-abreast carousel, a shooting gallery and many classic arcade machines.

But this is not the first time the Pier has burned. In 1955 Stanley Tunney was preparing his business, Freeman’s Amusements, and his hand-carved carousel for the new season. On June 9 a fire broke out and in two hours destroyed his carousel and the busy pier. A faulty neon sign is believed to have started that fire. Tunney and his associates cleared the rubble and rebuilt for the next season. They eventually created Funtown USA, which came to be known as Funtown Pier.

Nearby Casino Pier, which also sustained major damage last year from Superstorn Sandy, was untouched by the fire although the the loss of synergy with Funtown and the burned businesses is expected to hurt everyone in the resort.

Pictured below: Funtown Pier pictured during rebuilding work – and before the blaze – this June, 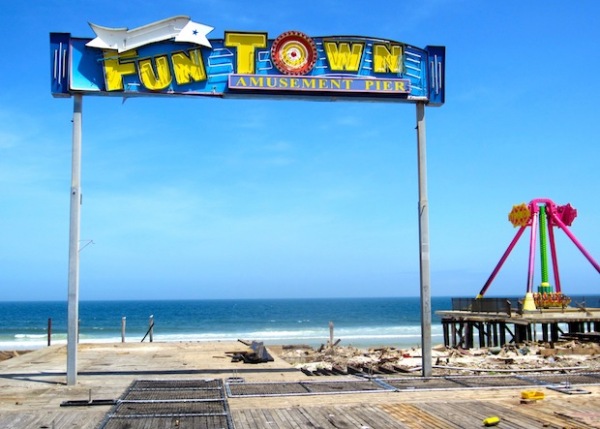 Still recovering from Superstorm Sandy 11 months earlier, on September 12 a fire tore through the boardwalk in Seaside Park and Seaside Heights, New Jersey – causing damage to local shops and businesses including Funtown Pier.