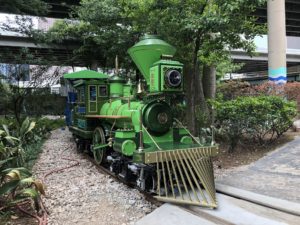 C.P Huntington’s 440th train was manufactured in the Wichita, KS facility, and will now operate in Houston as the Electric Eel Train, taking guests through the Shark Voyage.

The Downtown Aquarium also hosted a Party for the Planet in honour of Earth Day – a fitting date for a debut of the Electric Eel Train, as it is a zero-emissions, lithium-ion battery powered train. The coaches also feature specially designed clear tops that allow for a broad view of the sharks in the shark tunnel. 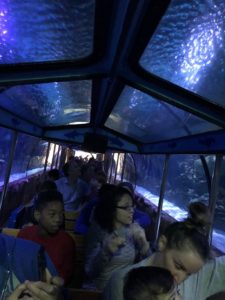 Dick Chance, CEO and Aaron Landrum, president and COO were on hand for the unveiling, and the aquarium offered free rides to all its guests for two hours following the ceremony. The Electric Eel Train now runs seven days a week at the Downtown Aquarium, Houston.