Eichelberger and ProSlide pair up for Premier Parks

Eichelberger began his career in the amusement industry as a fry cook in a fish-fry hut at Six Flags Over Texas in Arlington, and across his 45 years in the industry has seen the development of new attractions and coasters, and the increasing popularity of waterparks. 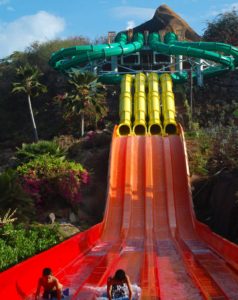 “By the time we really started getting going with Six Flags we were buying a lot of rides,” said Eichelberger. “I don’t think I could count how many slides we’ve bought from ProSlide over the years, certainly in the hundreds. I suspect we bought as many slides as anybody else has from ProSlide in all the years.”

ProSlide CEO also commented: “We love working with Premier Parks. Hue and the others at Premier are as passionate about this industry as I am, and we’ve just had a great relationship over the years. We know they’re excited by the latest and greatest, and that’s what ProSlide delivers!”

Annual attendance across the 15 Premier Parks is over six million, and both companies are keen to keep the numbers ticking up. Premier Parks is known for its fast expansion, and, having entered its second major growth spurt, is primed to bring ProSlide along for the ride.