The Netherlands’ number one theme park has launched an ambitious new entertainment venue. The imposing medieval city also forms the backdrop to a TV show, book and online game.

“Never before have we presented an open air park show of these proportions,” notes Efteling president and CEO, Bart de Boer. “The production is on such a grand scale that special music has been composed for it by the Brabant Orchestra. In true Efteling tradition, it has a clear moral message: about working together and learning to use your own talents.”

The show was created by the park’s own creative team and more than two years’ work have gone into the story behind it, which was written by renowned Dutch children’s author Paul van Loon. Full of magic and spectacle, the 30-minute show is performed at the park up to six times daily, featuring five horses, five ravens, an owl, falcon, 10 cast members and a five-headed dragon.

As well as the enormous 1,200-seat open-air arena, guests can also enjoy the action from the terraces of the Het Wapen van Raveleijn restaurant. The venue – like most things in Efteling – is richly themed, and also serves as an event space and new offices for the park’s staff.

Although the park is no stranger to television collaborations, such as the Sprookjesboom (Fairytale Tree), Raveleijn marks the first time Efteling has developed a live entertainment production as a fully integrated multimedia offering. As well as a 12-part television drama series by Efteling Media, which debuted on the RTL4 network in February, a book was published on March 22. A online game, which promises to be one of the biggest free online games launched this year in the Netherlands, is backed up by a dedicated Raveleijn website, where visitors can become friends with the story’s five main characters.

But Raveleijn is not the only new live entertainment offering this season at the Dutch park. In October, the Efteling Theatre will host a brand new production called Dreamflight the Musical, based around the popular attraction of the same name. The family show is the first to be produced by Efteling Theatre Productions together with Joop van den Ende Productions. 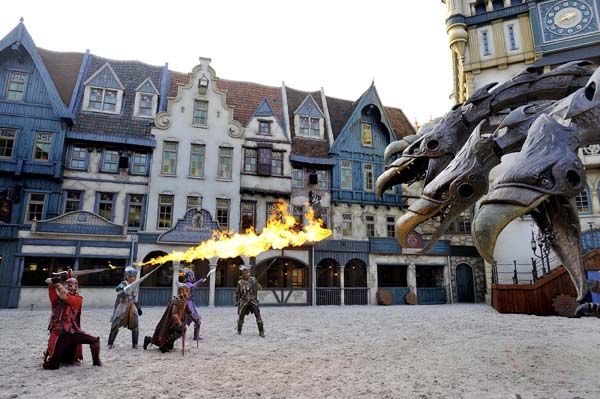 Where Raven Riders Are Raised

The Raveleijn live show features the Woudenberg family, who move from the city to a new home on the edge of a forest where a great adventure awaits their five children. Ravens and a mysterious woman’s voice lead them to an ancient city gate, upon which a cryptic text appears: “Where Raven Riders are raised.”

As soon as they step through this gate, the children are transformed into grown-up riders and the ravens change into beautiful horses. They have arrived in a completely different world, the ancient city of Raveleijn. Here, Count Olaf Grafhart rules with an iron fist, forcing the people to build monstrous creatures, with which he crushes any insurgents. These ‘Graffers’ are made from iron, wood and leather, with steel jaws.

The children stumble upon a group of residents who have fled the city and formed the Order of the Raven. They learn of a mysterious prophecy: five Riders will save the people of Raveleijn, and they are the chosen five. The children discover they possess special powers based on the elements of fire, wood, metal, water and earth. A battle to the death ensues…

Pictured below: Mayors from 230 Dutch boroughs attended the official opening of Raveleijn 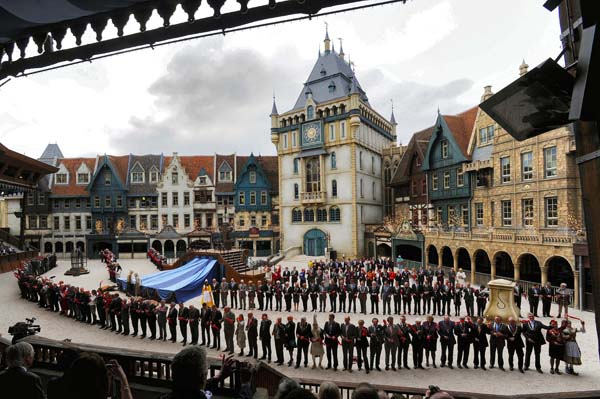