Following the opening of the new Bosrijk holiday village, Efteling is preparing to become a year-round destination. Owen Ralph catches up with president and CEO Bart de Boer ahead of the new season.

Internationally renowned for its fairytale characters, charming and elaborate theming, Efteling is the Netherlands’ number one theme park. Affectionately known as the “World of Wonders,” the Katsheuvel-based park is older than Disneyland and in 2009 clocked up record visitor numbers. Bart de Boer, 59, has served as president and CEO of De Efteling BV since 2008. Educated at the Erasmus University in Rotterdam, he previously held management positions at Koninklijke Ahold supermarkets, Esselte Abonnee TV, Pay-TV Netherlands, Eindhoven Airport and Gran Dorado.

It is said that every Dutch citizen visits Efteling four times in their lifetime. How often did you visit as a child?

I came at least five times as a child, and even though in between I did not visit that much, when I came here to work in 2008, I saw many things I still remembered. For instance you have a wishing well that as a child I found rather frightening, well now it seems such a little thing, but suddenly all these things come back to you.

What are the park’s greatest strengths?

First of all we are an icon, certainly in the Netherlands, but also in parts of Germany and Belgium too. The Fairy Tale Forest from when the park started 58 years ago with designs of Anton Pieck is still at the core of the park. We have kept the forest as it was, and every now and again we are building new attractions.

Another strong point is our target group, extended families, which means we do not have to keep building taller, faster, higher rides. In everything we do, we are storytellers. Our most popular attraction is still Droomvlucht (Dream Flight), people are so quiet in there because they are enjoying the story and then making their own stories. Even if we have attractions you can find elsewhere, they still have an Efteling touch.

How do you retain the original Efteling spirit when adding new attractions?

Right now we are building the wooden racing coaster Joris en de Draak (George and the Dragon). Great Coasters International are building this attraction and they are doing a great job. It’s going to be a spectacular ride, with an 8-metre high dragon right beside it that blows fire and splashes water with his tail. It’s going to be a double racer, but Great Coasters said if we’d spent the money with them instead of doing the dragon story we could have done a triple racer! We think it’s necessary that there is a story attached to things we build, and of course our architecture has a classic feel to it too.has a classic feel to it too.

Last season you attracted 4 million guests for the first time. Can you keep growing attendance, or is it more important to concentrate on per capita spending?

We were quite frightened before last season, but we can proudly say the economic crisis has not hit us; we are like the cinemas were in the 1930s. We cannot complain about spending either. We have to see what happens this year of course, but hopefully we can grow attendance a little. Opening year-round should help this.

Will the entire park be open year-round?

Yes. We open again on April 1, but then we will never close. This includes the whole park, except for some coasters that cannot work when it’s freezing. It does not freeze often in the Netherlands …except this winter!

There are a few reasons for opening year round. Winter Efteling, our Christmas celebration, has been a huge success. Then we have Efteling Village Bosrijk. We wanted to have Bosrijk open all year round and to do that you need to offer the people something, which is the main attraction park, and also the Efteling Theatre. We will still have our peak summer staff, but now it helps to keep some staff year round.

So it has all these advantages, but when I look outside now, and it’s a dreary February day, I wonder how many people will here be this time next year. We will wait and see!

Why did you develop Bosrijk instead of another hotel?

Two reasons. In the Netherlands we invented Center Parcs, which has been a very big success, so this kind of offering is understood here. The other thing was that we wanted to do something special. It took us about 20 years to get permission to build this village in the middle of the forest, but that makes it very attractive and unique.

With the holiday village you hope to attract guests from further a field?

Yes. We could see that it’s getting more and more difficult to travel in Europe, and we want to attract more people from neighbouring countries. Even from Cologne, to come to us and back in one day takes much time, so we now we provide the opportunity for more of our guests to stay overnight. It is also getting harder to make the journey down from the north of Holland.

What will some of the other challenges be in the years to come?

Competition is fierce, not only from other attraction parks but watching television, doing sport etc. Every leisure activity is competition for us; people are spoiled.

What I found when I came here was that if you ask people when they last visited they say about three years, but if you really push them, it appears to be much longer. Efteling is really a part of Dutch life, but sometimes you need to remind people.

Last year we did a very strong marketing campaign, and it stimulated people to come and visit us once again. It also helps to have things like our own television series, and of course you have to keep your attractions in good shape and keep adding new ones.

You have some very loyal fans. How do you communicate with them?

Last spring we invited the top four fan sites here to tell them about our new developments. There are some very active fan sites on the internet, and we use Twitter, but I think we need to be more active in the area of online communities.

To be frank, we used to keep the fans at a bit of a distance. They can be very conservative at times. For example if we had a wall that was green and I painted it blue, they would want to fire me! On the other hand, they see what we are doing and they can be of great value to us in sharing their opinions and ideas.

What do you have planned in the next couple of years?

The next big thing at Eftelling is Raveleijn, opening in 2011. This will be a large open-air arena with a big show performing five times a day. The famous children’s author Paul van Loon has already written a story, which is going to be on television before having its own life in Efteling with Raveleijn as the setting. The lower floor is going to be a restaurant.

Raveleijn will also be home to our new offices. I am here in quite a decent room at the moment, but there are people working in temporary buildings who have been there for too many years. We joke when the wind blows that they have to hold onto their paperwork! Normally you don’t invest in offices, but attractions. With Raveleijn we will combine the two.

Then, in 2012 it will be 60 years of Efteling, so there will be something special.

Stories have circulated for some time suggesting you may develop a second park. Is this a possibility?

There is a certain risk in having all your activities in one location. On the other hand, a second park would be a huge step. We are not actively searching. There have been some very nice opportunities, but we wait for a very, very good one to come along. We have the advantage that we are a very conservatively- financed operation, so we could strike if the right opportunity came along. I wouldn’t say it has to be a second Efteling, but is has to share our values. And I don’t think it will be in the Netherlands.

Even before the 4-Star Efteling Hotel opened in 1992, management spent many years contemplating the idea of additional accommodation at this popular family entertainment destination close to Tilburg. Open since December 2009, the €52 million Efteling Village Bosrijk is an ambitious development set inside a forest between the main theme park and its adjoining golf park.

Occupying a varied 17-hectare landscape including dunes, open fields, a babbling brook and a manmade lake, the village comprises 99 detached woodland cottages, 26 terraced village cottages and 78 apartments, plus two imposing main buildings, the Poorthuys (Gatehouse) and Landhuys (Manor). As with all Efteling undertakings, the buildings are sympathetic to their natural surroundings, using authentic materials such as wood and stone.

It is the Poorthuys that forms the main entrance to Efteling Bosrijk and houses the holiday park’s central facilities, including a reception area, restaurant, souvenir shop and Badhuys (Bath House), a mini indoor waterpark for young families.

The Landhuys, meanwhile, offers fantastic views overlooking Efteling Golf Park and is divided into 54 apartments and a communal lounge. This makes it  particularly suitable for groups, family events and business meetings. Efteling Bosrijk can house a total of 1,150 guests, six to eight per cottage or four per apartment.

Occupying prime positions are 18 VIP cottages and apartments, each of which comes with extras such as Jacuzzis, saunas and hotel service. The village also has 14 cottages and apartments equipped with additional features for disabled guests.
But such facilities alone do not a fairytale make, and so Efteling imagineers have devised a theme based around the story of Mr Sandman. The sand sculpture in the centre of the lake, which provides a nightly light show after dark, sets the scene.

Package deals are available including unlimited theme park access, and the minimum stay is two nights. With this exciting new development, Efteling chiefs hope to encourage families from the Netherlands and beyond to enjoy a short break in the beautiful Brabant countryside, combined with all that the World of Efteling has to offer. 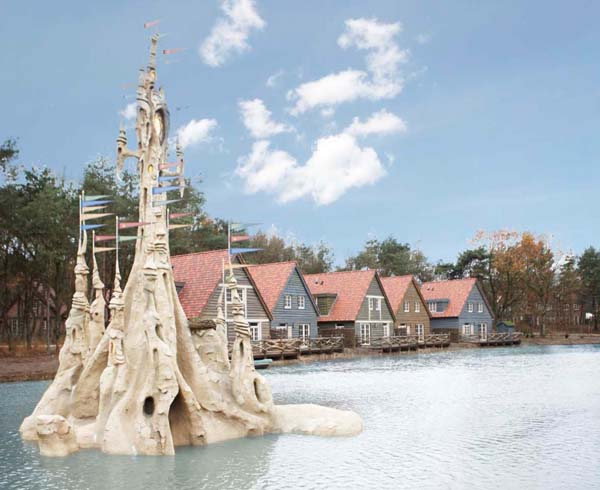