Whichever way you judge it – number of visitors, number of exhibitors or occupied floor space – last month’s Euro Attractions Show (EAS) in Barcelona was the largest in its history. Owen Ralph reports from the three-day event organised by IAAPA EMEA (Europe, Middle East and Africa).

The first EAS to be held in southern Europe since 2010’s event in Rome was also a lot of fun. Many of the 12,600 industry professionals attracted to Barcelona were surely enticed not only by the 525+ exhibitors on offer, the many quality education opportunities and networking events, but also by the Catalan capital itself, where temperatures hovered around the mid-20s (ºC) all week. Reaching the city was easy, with direct flights available from across Europe, unlike last year’s excellent but less well-attended EAS in Gothenburg, Sweden. As well as many visitors from across the Mediterranean, there was also an increase this time in attendance from the Middle East, an indication perhaps that IAAPA EMEA’s extended reach is beginning to pay dividends.

“Hosting the event in the heart of Catalunya and Barcelona underlined the importance of leisure destinations and attractions in the Spanish tourism industry”, reported Karen Staley, senior vice-president for IAAPA EMEA. “Catalunya tourism professionals attended the event in big numbers and there was a strong presence of local companies on the exhibition floor.” 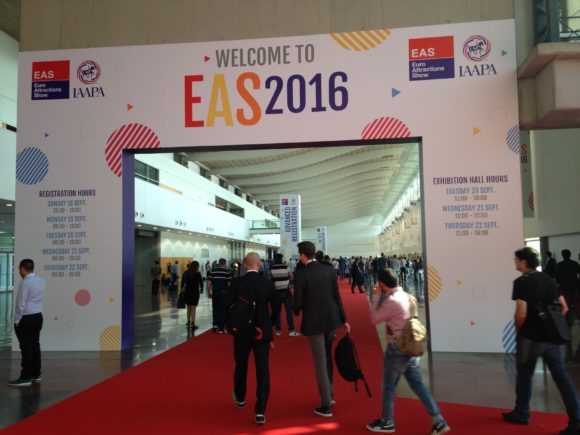 It was back in the year 2000 that IAAPA brought its Summer Meeting to Barcelona, taking in visits to the city’s hilltop amusement park Tibidabo, and also PortAventura near Tarragona. Those two facilities, visited subsequently by BALPPA and other industry associations during their own events in the city, were “no brainers” when it came to the programme for EAS 2016. PortAventura World featured heavily, serving as the backdrop to a behind-the-scenes tour, IAAPA Safety Institute and the European Star Awards on Monday, as well as participating in several education opportunities at Fira Barcelona and co-hosting the IAAPA Institute for Attractions Managers.

Tibidabo, on the other hand, provided the breathtaking backdrop to Tuesday night’s Opening Reception, up there with Paris’ Musée des Arts Forains (used in 2010) as one of the best venues ever for an EAS party. Charming rides and attractions, abundant food and drink, nice live music and stunning views over the city below all contributed to a memorable evening in the company of industry colleagues old and new. Perhaps the only thing that spoiled it was the duration; some attendees having less than two hours to enjoy all the above once their buses had made their way through Barcelona’s rush hour traffic. Another hour in the park, particularly for those left stranded outside waiting for buses home, would have made all the difference. But still, those views!

On Wednesday night there was no official EAS party, so the TEA (Themed Entertainment Association) stepped in with a well-attended Mixer event over at the city’s waterfront aquarium, where IAAPA hosted a behind-the-scenes tour on Thursday morning, while WhiteWater hosted its own party up on roof terrace of the Museu d’Història in Barcelona’s old town. Park World was pleased to attend them both. 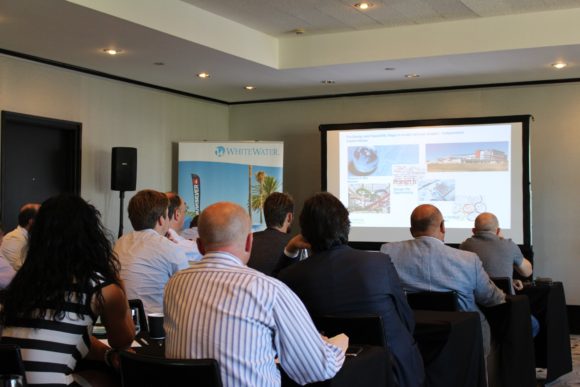 WhiteWater staged a Waterpark Masterclass elsewhere in Barcelona on the day before the show. Image courtesy Laura Gysen.

Education opportunities were in abundance off the show floor, with 16 conference sessions over the first two days of the show, plus one-day sessions targeted at operators and developers of FECs/small parks/playgrounds and also waterparks, for which WhiteWater staged a separate afternoon of seminars on Monday afternoon.
Covering more than 13,000 square metres of space, all EAS exhibitors were accommodated inside one large of hall of Fira Barcelona, with no outdoor exhibits. Media-based attractions continue to be touted by many suppliers, more and more of them incorporating virtual reality (VR). In a standing room only press conference, Europa-Park showed off its Coastiality VR app alongside details of its Halloween Horror Nights 10 and plans for a massive flying theatre installation in 2017. During an all-Spanish CEO Talk panel discussion on Tuesday afternoon, Parque Warner Madrid general director Diego Gracia Lovaco expressed his belief that “it seems like everything is going digital but I think in a few years we will all take a step back.”

British multimedia attractions specialist Holovis chose to not to exhibit any ride-based systems this year at EAS and instead push its “Extended Experience” offer. Using augmented reality, visitors to its booth could see first hand how parks can use media content to enrich the queue line experience and engage with a park before and after their visit. “It’s been a solid show,” noted Stuart Hetherington. “We always try to come away with one or two good leads and we’ve certainly got those.” 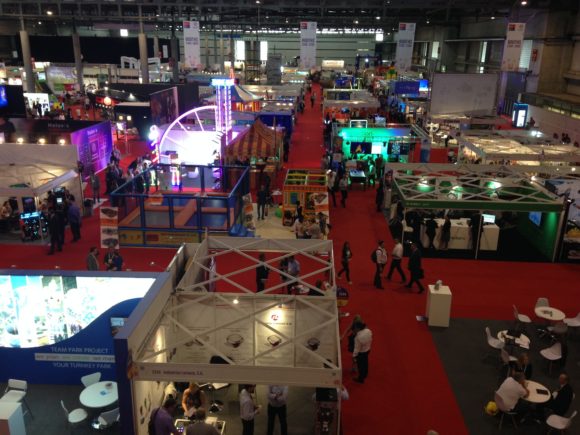 “It’s been a good show,” agreed Christian Martin over on the Triotech booth. “We’ve been busy as always but thankfully it’s not just people waiting in line to try our XD Theater; we’ve also had some good meetings too.”

“We are very happy,” reported Söhret Pakis of Polin Waterparks. “This has proved to be one of the best EAS shows for us after Amsterdam. I think IAAPA should make it one of the regular locations.”

“The show has been good, but not one of the best,” remarked Marco Mazzucchi of Zamperla. “Fortunately we are already busy for the next year.” Boasting a booth, as always, in a prime location, the Italian ride manufacturing giant had no new products to show on this occasion, but it will unveil its own VR ride concept next month at IAAPA Attractions Expo in Orlando.

Another ride builder with a busy order book is KMG. Prior to attending EAS, it has just one production slot available for 2016, but this and a slot for 2017 were sold before arriving in Barcelona. “Then we filled two more slots for 2017 at the show” smiled Peter Theunisz.

Next year EAS will return to Berlin, and then Amsterdam in 2018. Both are great European cities, alas the venue in the German capital will be the same fragmented collection of exhibition halls used in 2012, where space is expected to be a premium. Practically all but one of these halls had sold out at the time of writing, so get in quick if you want to exhibit there. The dates are September 26 to 28. with ancillary events beginning on September 24. 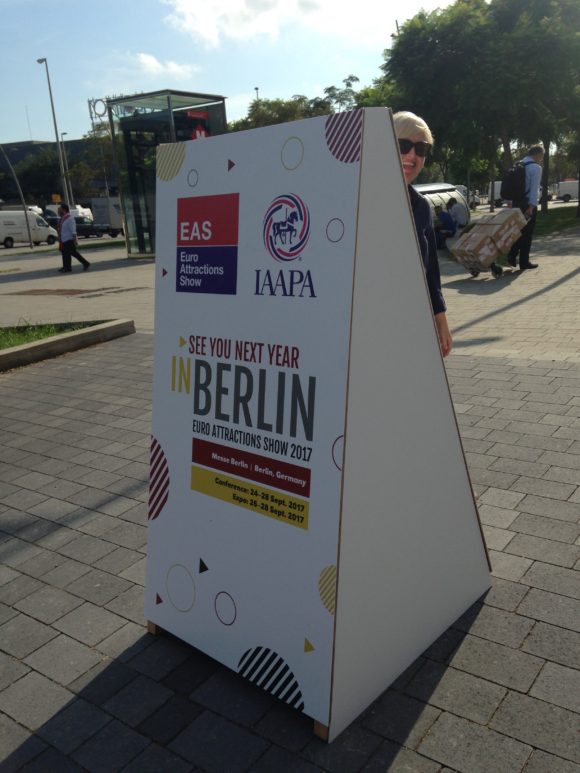