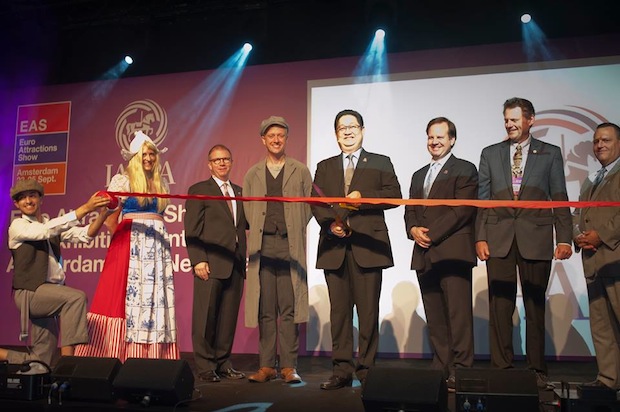 “With numerous projects going on in the northwest part of Europe and with a strong and dynamic industry in the Benelux-region, we had high expectations but these figures are really extraordinary,” commented IAAPA’s vice-president of European operations, Karen Staley.

As in 2009, when EAS last visited the Dutch capital, the venue was the RAI exhibition centre but this time there wasn’t enough room beneath the main hall’s arched roof to accommodate all 441 exhibitors (about 50% up on five years ago) and so both halls 7 and 8 were used instead. Add to this a packed education programme, some great networking opportunities, parties and tours, and there was plenty to see and do for the roughly 10,750 industry professionals (up 26% on last year in Paris) that attended from 23 to 25 September. Around a third of that total were Dutch, but in total over 100 countries were represented.

For those coming from outside Europe, the opportunity to combine EAS with the official post-show tour to attractions in the Netherlands and Germany, or perhaps a large event like Munich Oktoberfest, provided a particularly appealing option. It was a nice gesture too for 16 of IAAPA’s Dutch member facilities to offer free admission to EAS badge holders after the show.

Behind-the-scenes tours were offered in advance of the exhibition at Efteling, Walibi Holland and the Dolfinarium. As well more than 20 hours of seminars staged during the show, EAS also featured the IAAPA Institute for Attractions Managers, the IAAPA Safety Institute, a Young Professionals Forum, a forum for waterpark operators and a symposium for indoor playground/family entertainment centres.

A new manifesto for Europe

IAAPA Europe chose this year’s EAS as a platform to officially launch its new manifesto, which has been prepared in anticipation of the arrival of a new European Commissioner for Tourism. Safety remains the parks and attractions industry’s top priority, but fair tax rates across Europe, fair competition between public and private sector attractions and easier access for “third country” tourists would all help IAAPA’s members perform better, creating new jobs and investment. As the continent is so strong when it comes to ride manufacturing, much of that investment would stay in Europe. A more detailed report on the manifesto will appear soon in Park World.

Plopsa Group CEO Steve Van den Kerkhof delivered Wednesday morning’s EAS Leadership Breakfast, explaining how the intellectual property of Studio 100 has allowed him to build a five venue chain of parks in Germany and the Benelux – with more on the way. In fact, we learned during the show of the first Plopsa park to be licensed in Poland and, at another press conference, of the ambitious Park21development being planned in Haarlemmermeer near Amsterdam’s Schiphol Airport.

After last year’s fantastic EAS Opening Reception at Museé de Art Forain in Paris, IAAPA had a hard act to follow with this year’s event on Tuesday night. The party at Strandzuid, a beach-themed venue in the heart of the RAI grounds, was not quite on the same level but was nevertheless an enjoyable and well-attended event, as the reception always is. As well as the European Star Awards ceremony at the Heineken Experience, there were also receptions from Club van Elf, ALES-UK and the TEA, which took over Madame Tussauds in Dam Square on Wednesday evening. 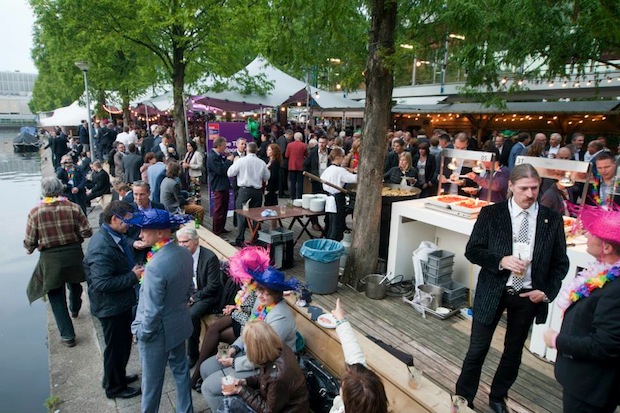 The Opening Reception at Strandzuid

Credit where it’s due

The stratospheric attendance enjoyed by EAS this year in Amsterdam meant that Europe’s largest trade show for the theme park and attractions industry is getting close to half the size of the annual IAAPA Attractions Expo in Orlando. Credit must go to Karen Staley and the team at IAAPA Europe, whose new senior manager Pablo Moragrega was attending his first EAS in such a capacity.

“I am happy not only with numbers,” reported Vekoma’s Charlotte van Etten, “but also the sophisticated look of the show. We’ve had good feedback, and people seemed to like the Opening Reception that we co-sponsored.”

“I’m very positive about the show,” agreed Theo van Zwieten of fellow Dutch ride manufacturer Mondial. “The customers can get in and out of Amsterdam very easily, the logistics and also the nightlife are very good. Having it here again was a good idea.”

“Over the years we have found that EAS typically attracts the more serious buyers and that those we speak to have the ability and capacity to spend,” noted Baz Slatter,  of imaging specialist Picsolve. “Couple all this with the added benefit of the show being conveniently located in Europe and makes it a strong date in our calendar each year.”

“The Euro Attractions Show continues to be a valuable conduit for WhiteWater to meet existing and future clients,” remarked Grant Poje, the company’s executive vice-president for Europe, the Middle East, Africa and Russia. “This year’s show was extremely successful for us and we look forward to attending next year in Sweden.” 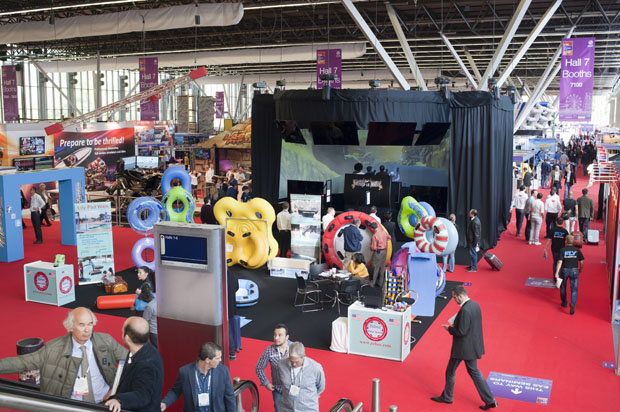 “One of our best markets in Europe at the moment,” revealed Andrea Cielo of Zamperla, “is France. I think that is because as well as the groups you also have a lot of small family-owned parks that are buying new attractions.”

“People want to invest,” observed Preston & Barbieri’s Lino Ferretti. “They are not huge projects, but at one of the biggest suppliers in this small to medium park sector this is good for us.”

“The attendance has not been bad but you have to come each year with new ideas otherwise people go to look online,” Marco Grigolo informed us at Technical Park. “This time we launched our new Aman-Ra and Aerobat Magic Bean rides.”

“For us the show seemed slow,” reported Wolfgang Brost of Maurer Söhne, “but we had a lot of pre-fixed appointments so we are happy. We also made some new contacts and learned about new projects. I think Europe is still an important market and, although we see a lot of dark rides coming, still nothing can beat a rollercoaster.”

Comments like that above about “slow” attendance reflect the fact that, even with several thousand people in the show at one time, once you spread them out over the two halls, restaurant/meeting area and conference rooms, you could soon loose them. Clearly it would have been better if the exhibits were all contained within one hall, but it’s great that Euro Attraction Show is now so big as to offer the visitor this much choice.

EAS 2015 will take place from 6 to 8 October at the Swedish Exhibition and Congress Centre in Gothenburg – just across the road from Liseberg amusement park, which is expected to feature strongly in the week’s programme of events. 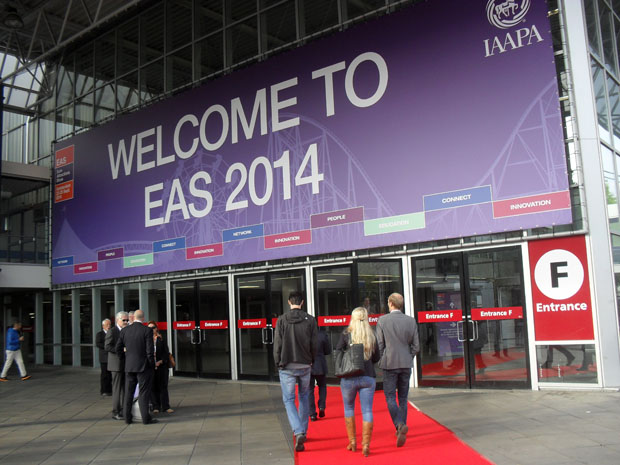 After events in 2001 and 2002 co-located with other amusement industry trade shows (ATEI in London and Interschau in Düsseldorf), EAS took place for the first time as a standalone exhibition in January 2003, pitching up in the Italian port city of Genoa. Founded by EAASI (European Association of the Amusement Supplier Industry), it started life as the Euro Amusement Show and was rebranded as Euro Attractions Show in 2006, a year after IAAPA took over as organiser in Vienna. It has continued to move around Europe ever since, and in 2008 was held twice as the show switched from a winter to an autumn fixture. Here’s when, where and how many visitors have passed through the doors of EAS in its 11-year history:

Here’s a few highlights from some of the 20+ hours of seminars held at this year’s EAS in Amsterdam:

“I don’t like storytelling too much, it can be very boring. I prefer emotion and thrill.”

“We are lucky enough to operate in country where people are not too used to discounting. To discount is like a drug; easy to get hooked, but to come off it is a very long and slow rehab.”

“There are no chains in Turkey because at the moment we are the only theme park, but there are more parks on the way and I believe the chains will come. in fact, we already see Merlin in the country buying an aquarium.”

“F&B not about food! It’s about creating an experience.”

“Is there an IP Bubble? I don’t think so, there’s just a change in the way society has embraced characters.”

“The most important walk around character in your park is the guest.”

Joe Garlington: ‘I turned interactive design into a speciality’