E-DA World is the name of a new 90-hectare shopping and entertainment district in Kaohsiung, south Taiwan. The project is a flagship for the E-United Group, a local conglomerate with roots in the steel business.

“They [E-United] are the fifth biggest steel producer in the world, but they also have a university, hotel chain, hospital and golf club,” notes Edward Cromheecke of the Fabbri Group, one the key ride suppliers at E-Da World. “All that was missing was a theme park.”

Although many of the attractions are still months away from opening, visitors to Kaohsiung are already offered a tantalising glimpse of what’s in-store in the shape of an 85-metre Ferris Wheel located on top of the shopping mall. The ride is the first to be completed by Fabbri’s new Giant Wheels division, and is one of several rides being supplied by the Italian manufacturer.

Including the building beneath it, the wheel stands 125-metres tall and was built to withstand the country’s extreme weather conditions including high levels of humidity, typhoons and earthquakes. The ride features 40 enclosed gondolas, including a VIP car with a computer, TV, bar, fridge and luxury leather seating. A sophisticated LED lighting package ensures maximum impact after dark. 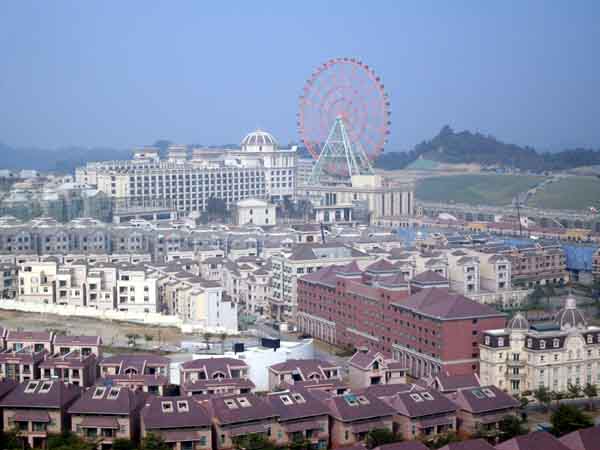 Vekoma is owned by the Dutch steel producer Huisman, which puts the park’s owner in the odd position of buying from one of its competitors. Then again, E-United doesn’t know how to build rollercoasters. Vekoma does.

Each eight-seater platform offers a bird’s-eye view of flight, featuring six degrees of freedom. The operator may control each of nine modules separately depending on the number of passengers. Above the seats are canopies serving as mounting bases for 4D effects as well as isolating guests from adjacent riders above or below.

The Giant Wheel should be turning in time for Chinese New Year in February, with further attractions coming on line in the summer.