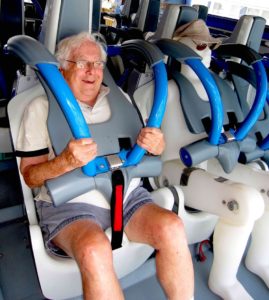 When testing his new Gale Force launched coaster at Playland’s Castaway Cove in Ocean City, New Jersey, owner Scott Simpson loads the train with test dummies. I’ve always wanted to be a test dummy, so asked Scott if I might take one of their places. That’s me pictured on the left, the one without the sun glasses.

Test dummies are important. They are filled with water to approximate the weight of a passenger, and are then sent through the entire ride. They do not complain, and they do not get motion sickness. Well, I thought I could do that job. I was filled with something from the night before, climbed aboard, did not complain, and did not become nauseous. I did get bumped around a bit, but that’s to be expected on a roller coaster, especially a prototype coaster like Gale Force.

A prototype? Yes, indeed. Gale Force is the world’s first S&S LSM Triple Launch El Loco Coaster. It offers visitors to the Jersey Shore an exciting and unique high-powered ride experience. The ingenious design of the three launches (one forward, one backward, and a final forward launch at 64 mph (103 kph) provides an exciting ride experience on a coaster that has a very small footprint. S&S has packed the ride design with many elements, including a 125-foot (38 m) crest, the pure rush of a 100° down drop at 59 mph (95 kph), a 180° twisting climb, an off-camber dive drop, a corked roll, a top hat twist, and a raven dive. It has a relatively short ride time (1 minute) and single train (12 passengers), which makes it a perfect fit for this seaside park. The new triple-launch version of El Loco is even more vertical and compact than the original El Loco that debuted in 2008 at Indiana Beach with a traditional lift hill and a horizontal layout.

Gale Force squeezes a lot of thrills into a very tight space. The triple launch, both forwards and backwards over the same section of track, is one that test dummies can do that with impunity. With space at a premium on the boardwalk location, every square foot, or square meter, counts. To increase the level of claustrophobia, Simpson asked Fred Miler to build another coaster wrapped around Gale Force, which he dubbed Wild Waves. Then, because there was still room to breath, he shoehorned Whirlwind, an SBF Visa Compact Spinning Coaster, next to it. The result is the densest collection of roller coaster track I’ve ever seen. But if you enjoy riding coasters and don’t like walking long distances, this is pig heaven.

Eventually it was time to remove the test dummies, including me, and let real people ride.

As I watched, everyone seemed to enjoy riding Gale Force. You could hear their screams of joy up and down the beachfront. Test dummies don’t scream; it’s not part of their job description. Real people do. So while being a test dummy was fun for a change, it’s more fun to ride with real people and then watch real people thrill to their coaster ride. That’s the best part of this job.