Florida’s Walt Disney World (WDW) is to embark on a multi-year transformation of its Downtown Disney entertainment district, to become known by the new  name of Disney Springs.

The area, which comes alive each night after the four WDW theme parks close, will feature roughly double (150) the current number of themed restaurants and retail outlets. Drawing inspiration from Florida’s waterfront towns, Disney Springs will include four neighbourhoods interconnected by a flowing spring. The Town Center will offer “a sophisticated mix” of shopping and dining along with a promenade, The Landing will be a commercial district with waterfront views, the Marketplace will be a family-friendly area featuring Disney characters and an expanded World of Disney store, whilst the West Side will be the entertainment hub.

“Disney Springs will be a timeless, vibrant place where Walt Disney World guests and local residents can relax, shop, dine and be entertained in an imaginative setting where they’ll instantly feel at home,” says Tom Staggs, chairman of Walt Disney Parks and Resorts. an estimated 1,200 construction jobs and nearly 4,000 operational roles.

Construction has begun with new areas opening in phases. Disney Springs is expected to be complete in 2016. 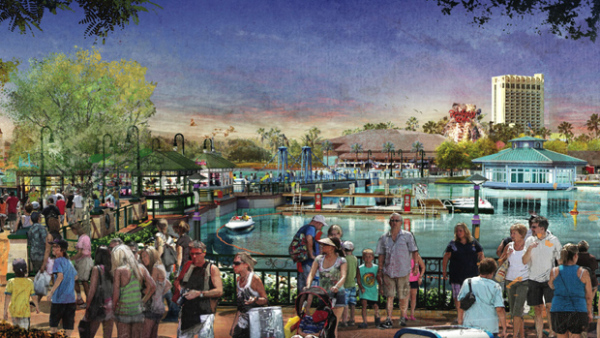