Dolly Parton has announced an  announced an entertainment lineup for her Dollywood theme park in Pigeon Forge, Tennesse that represents an investment $1 million greater than any season-long entertainment schedule in the park’s history.

Hailing the year as a ‘Season of Showstoppers,’ Parton Dollywood’s 2018 entertainment roster begins with Dollywood’s Festival of Nations, March 17-April 9. April plays host to three weeks of performances during the all-new Spring Mix music series. Already one of the nation’s best bluegrass events, Dollywood’s Barbeque & Bluegrass, May 25- June 10, adds an extra week of concerts from the biggest names in the business. Guests should expect hundreds of live bluegrass performances dur 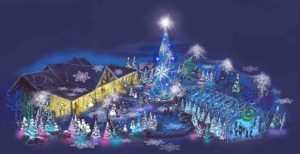 Families have a multitude of options to keep them entertained during Dollywood’s Summer Celebration. Acts include iLuminate, finalists on America’s Got Talent in 2011; international touring sensation DRUMLine Live!; speed painter Dan Dunn and a number of contemporary Christian artists who will perform throughout the park.