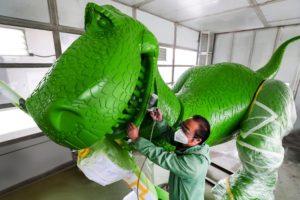 Major construction of Disney Toy Story Land is close to completion, Disney reports, and will be followed by an extensive preparation period including ride testing and adjustment and trial operations, in anticipation of the day when guests will officially be welcomed as ‘honorary toys’ in the backyard of Andy, the boy from the Toy Story films.

Based on the Disney·Pixar film series, Disney Toy Story Land aims to make guests feel as if they’ve been shrunk down to the size of their favorite Toy Story toys for laughter and fun in a high-spirited, colorful world. Woody, Buzz and their Toy Story pals come to life and play in this fully immersive land, which features three new attractions – Slinky Dog Spin, Rex’s Racer and Woody’s Round-Up, as well as a uniquely themed character greeting area (Meeting Post), and immersive shopping and dining experiences Al’s Toy Barn and Toy Box Café.

The opening date of Disney Toy Story Land, April 26, 2018, will also mark the second anniversary of the opening of the Shanghai International Tourism and Resorts Zone, and the timing means the expanded attractions and entertainment will be available in advance of the summer season.