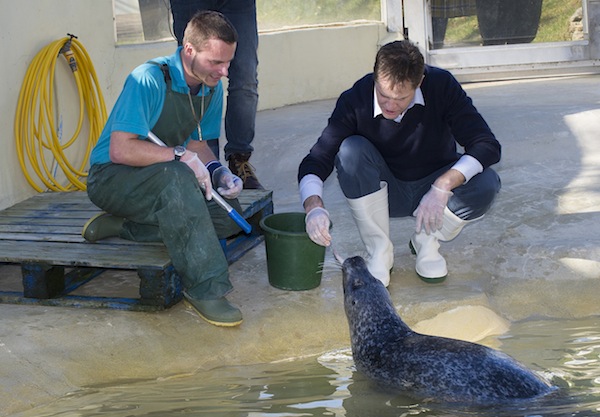 British Deputy Prime Minister Nick Clegg dropped into the Cornish Seal Sanctuary last week to push his party’s green agenda in the run-up to the general election …and found himself under interrogation over VAT on tourist attractions.

The Liberal Democrat leader toured the Sanctuary, meeting its staff and resident seals and other animals to highlight green achievements across the UK and the countdown to an end to free plastic shopping bags, which from October 5th will cost £0.05.

“Plastic is a serious hazard for marine life, including seals,” said animal care supervisor Tamara Cooper, “and plastic bags are one of the biggest killers.
“We are delighted there will be an obligatory charge on plastic bags, and echo the Deputy Prime Minister’s hopes that reusable bags quickly become second nature.”

But the Merlin-operated attraction’s general manager Trevor Broome was not going to miss the opportunity to tackle the nation’s current second-in-command on the thorny issue of VAT on tourist attractions (Merlin and others are campaigning for a special tourist rate of tax, in line with other European countries rather than the current 20%).

“I asked him what his stance was given the evidence to show cutting VAT would encourage more overseas visitors and create thousands of new jobs,” he said. “Needless to say, I didn’t get an answer.”