In part one, Gary tracked Elitch’s Gardens’ growth from a privately owned zoological garden opened to the public in 1890 by Mary Elitch to an amusement park that was purchased in 1930 by the Gurtler family, whose aggressive showmanship caused it to outgrow its space by 1970.

An amusement park too big for its own space is challenging enough, but the Gurtler family had another concern, another Denver amusement park just a half-mile away that gave Elitch’s more competition than most people in Denver – and the amusement industry – were aware of.

Lakeside Amusement Park, originally called White City, had a more traditional history than Elitch’s Gardens, beginning as a trolley park built by the Denver Tram Company in 1908, and soon sold to Adolph Zang. White City was a common name for American amusement parks in the early 1900s, so derived from the 1893 Chicago World’s Fair, which was referred to as White City because of its plethora of white paint and electric light bulbs. Denver’s White City held true to its namesake with architecture similar to the Chicago Exposition and over 100,000 lights.

During the 1940s and ‘50s, Lakeside Amusement Park and Elitch’s Gardens shared the Denver population, many of whom happily walked the half-mile from one park to the other on a summer evening. While Elitch’s had a colourful local history with its famous gardens and the Elitch Theater, Lakeside was holding its own as a more standard, thrill-laden amusement park. Most significantly, Lakeside had something Elitch’s didn’t have room for: picnic facilities. With space that could handle over 10,000 a day, Denver companies both small and large continually used Lakeside for their annual summer picnics. 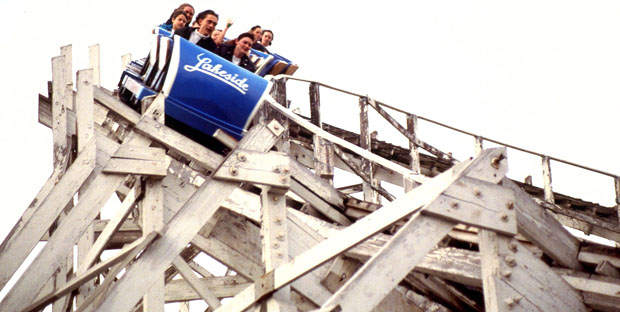 But no shakedown occurred. Moreover, when Ben Krasner died in 1965, his energetic daughter Rhoda had gamely moved ahead, keeping Lakeside alive and well with a large arsenal of thrill rides. Elitch’s countered in 1966 with the John-Allen designed Twister wooden coaster, joining its 1927 Herbert Schmeck-designed Wildcat.

How long could such competition last between two impressive parks that were just one-half mile away from each other, and sharing a rather modest market? In 1982 I became friendly with Elitch’s marketing director. After requesting anonymity (now over 30 years later, I suppose I can say her first name is Martha), she spoke openly.

“Jack and Buzz Gurtler aren’t exactly threatened by Lakeside,” Martha told me at the time, “but they sure envy Lakeside. They’re eye-balling it big time, and I believe they’d purchase it if they could, and they’ve probably even made offers. It makes sense. Elitch’s is out of space, and we can’t forfeit our limited parking for more rides. The Gurtlers could purchase Lakeside, with its beautiful lake and train ride, the off ramp from Interstate 70 practically spilling into the park, more than enough parking, and all those wonderful money-making picnic facilities. We could move all our flat rides over there, keep what Lakeside already has. And Lakeside’s Cyclone is a match for our own two wooden coasters, or we could move either or both of our coasters and create a monster park with three world-class wooden rollercoasters and over 40 rides.”

The day after that revelation I asked Rhoda Krasner if she had received offers – from anyone – to buy her beloved Lakeside Park. “Oh sure,” her eyes twinkled, “I’ve had lots of offers. But nothing I couldn’t refuse.” 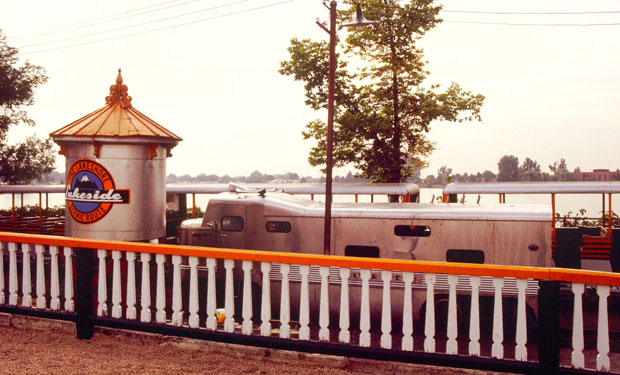 In 1994, with Budd Gurtler’s son Sandy control, Elitch’s Gardens made the necessary and inevitable move, to downtown Denver. Its two wood coasters didn’t survive the move, as Sandy Gurtler found it more practical to build a newer, modified and yet reverent version of the Twister, naming it Twister II. The move was a boon for Gurtler, giving Elitch’s a welcomed location within a huge sports and entertainment complex, including Denver’s Mile High Stadium and Pepsi Center, with service by an Interstate 25 freeway off ramp, and bus and light rail stops at the park’s entrance.

When I visited Denver in 2011, I’d been away for almost 30 years, and I was pleasantly surprised and impressed with the new Elitch Gardens. Its entrance leads into a covered mall that contains photos and original signage of the old Elitch’s Gardens; a proper homage to its namesake. The mall empties into an flowered area that showcases Elitch’s 1928 Philadelphia Toboggan Company carousel.

Elitch Gardens’ waterpark is integrated within the theme park, with lockers allowing guests to go back and forth between the wet and dry parks. Live shows are presented daily in the Trocadero Theater, big name entertainers appear in the Elitch Arena, and fireworks light up the sky every night. 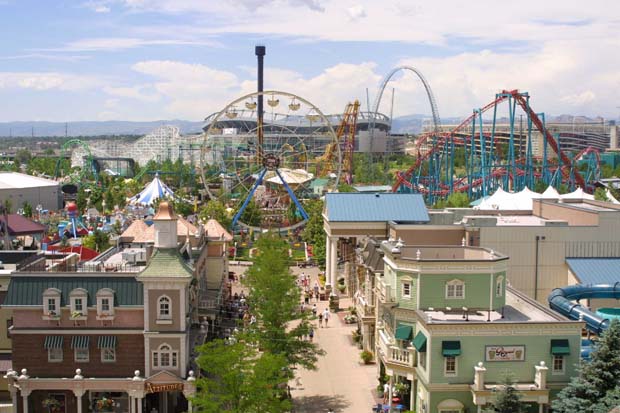 Having witnessed the new Elitch Gardens’ obvious success, I rode Twister II, then drove to Lakeside Park. The park hadn’t yet opened for the day, and so I had the quiet pleasure of savouring the freshly-painted, lawn-laden and flower-laden American treasure that is Lakeside Amusement Park. Everything was perfectly manicured and trimmed, the wonderful old architecture clean and well maintained. Brenda Fishman, operations manager, gave me the tour, obligingly escorting me into the classic station of the Cyclone coaster, and walking a portion of the train track that circles the Lake Rhoda. I had many questions, and she answered them confidently.

Lakeside’s Fun House was the last old American amusement park Fun House to close down, in 1986 (Lagoon, in Farmington, Utah, had closed its Fun House just prior to that) A marvellous museum piece, Lakeside’s Fun House included a [possible] one-of-a-kind “vertical slide,” where the patrons would hang their legs over a wall and drop off, with the wall sloping out 90º degrees onto the floor. I asked Brenda if the Fun House’s closure was due to rising liability problems with such facilities.

“Only partially,” she explained. “It took five people to operate it, and that’s five rides we could run. It was sad to see it go, but it was necessary.”

Lakeside’s Wild Chipmunk is Miler’s version of the Wild Mouse, and there are very few still around (Adventure City in Anaheim, California has one). Are there any problems getting parts for it?

“Not at all,” said Brenda. “Miler is great to us that way, and we also have one of the kiddie coasters, so there’s not a problem.”

How’s the Cyclone running? (My flight would leave before the park opened that evening, so I wouldn’t be able to find out myself.)

“Leonard Adams and Structural Technologies from Pennsylvania did a great job. They’re the ones who also rebuilt Conneaut Lake Park’s Blue Streak. Their main task here was re-tracking the bottom of the Cyclone’s first hill, around the 180º turn. It rides like new now.”

And look at all this beautiful land, with a lake and an exit off Interstate 70. There must be hundreds of offers from potential buyers. Are you ever tempted to sell?

“Of course there are offers, continually, offers worth millions. There could be condominiums lining the lake, or a large mall, or just a soft greenbelt park owned by the city. But what would we do, not having Lakeside Park? What would be the point, besides getting a lot of money? I love this work, and there’s nothing else I’d rather do.”

I appreciated, and was relieved by, Brenda’s passion and understanding of the industry, and asked her if she would be the one to accept the torch from Rhoda Krasner, who has doggedly and determinedly kept Lakeside Amusement Park going, even against the formidable Elitch Gardens, which at one point was heavyweight Six Flags.

My jaw dropped. I had no idea. Before I could speak, Rhoda herself walked up to us, still energetic, radiant and beautiful.

“Rhoda…” I was still speechless, and I pointed to Brenda. “This is your daughter!”

There was nothing left to say. Lakeside Amusement Park will continue, and in 2013 it will be 106 seasons strong. It looks like Denver, Colorado, will always have two great American amusement parks. 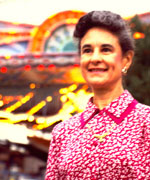