In this two-part series, Gary Kyriazi explains how the Colorado city of Denver is able sustain two competing amusement parks.

With over 1,500 amusement parks in America in the early part of the 20th Century, and with every sizeable community having an amusement or “trolley” park, it was inevitable that the larger cities would have multiple parks. Was there competition within the major cities? Certainly.

But as Coney Island proved, its 1897 Steeplechase Park, 1903 Luna Park (an expansion of 1895’s Sea Lion Park) and 1904 Dreamland, created a destination for New Yorkers, who would happily cross the street to go from one park to the other. In Los Angeles, there were no less than seven amusement parks within a healthy two-mile walk along the Pacific Ocean, where piers and parks were built, flourished, competed with each other, burned down and rose from the ashes, bigger and better than the previous version.

Up until the 1950s and 60s, cities like Boston, Cleveland and Salt Lake City maintained multiple parks. Atlantic City, New Jersey and Panama City Beach, Florida, kept their multiple parks going through until the 1970s, and Myrtle Beach, South Carolina and Wildwood, New Jersey’s parks and piers made into the 21st Century. Disneyland and Walt Disney World, with their respective local competitors, continue to feed off each other for visitors to Los Angeles and Orlando.

Denver, Colorado, however, remains a seemingly unlikely survivor for maintaining two parks for over 100 years. Now superseded by Elitch Gardens in downtown Denver, the original Elitch’s Gardens was just over a half-mile from Lakeside Park, the two venues opening in 1890 and 1908 respectively. Interestingly, the genesis of each park was distinctively different. Elitch’s Gardens began essentially as the “park,” while Lakeside was the “amusement.”

In 1888, John and Mary Elitch purchased an apple orchard five miles west of what was the 30-year-old western cattle town of Denver and converted it into Elitch’s Zoological Gardens (Denver’s first zoo), a wonderland of exotic animals, orchard and gardens. When they opened their gardens to the public in 1890 (opening day guests included their friend and consummate showman PT Barnum), the success was immediate. Although John Elitch died in 1891, 34-year-old Mary Elitch bravely went forward and opened the Elitch Theater in 1892 (which included a 14-year-old stagehand/hopeful actor named Douglas Fairbanks). The stars that graced Elitch’s stage throughout the 20th Century included Sarah Bernhardt, Cecil B DeMille, Edward G Robinson, Grace Kelly, Lana Turner, Mickey Rooney and Vincent Price.

In 1916 Denver businessman John Mulvihill purchased the Gardens from Mary Elitch and began a dynasty of four generations of family ownership. Part of the sales contract allowed Mary Elitch to live rent-free in her cottage on the grounds as “the Gracious Lady of the Gardens,” receiving $50 a month until she died. She spent the last four years of her life with relatives and died at age 80 on July 16, 1936.

The first major addition Mulvihill made to Elitch’s Gardens was 1917’s Trocadero Ballroom, Denver’s stop for the great dance bands of the era, including Tommy & Jimmy Dorsey, Benny Goodman, Guy Lombardo, Gene Krupa and Lawrence Welk. A carousel and a simple out-and-back wooden rollercoaster named The Sky Rocket appeared in the early ’20s. The Philadelphia Toboggan Company (PTC) replaced the original carousel in 1928, and in 1936 one of PTC’s top coaster designers, Herbert Schmeck, reprofiled the Sky Rocket into the 68ft-high Wildcat. The “amusement” side of Elitch’s Gardens was well on its way.

In 1930, John Mulvihill died and his son-in-law Arnold Gurtler assumed ownership of Elitch’s Gardens, succeeded in 1945 by his sons Jack and Budd. The Gurtlers gamely expanded the park and added rides, the most notable being 1964’s 70ft-high Mr Twister wooden coaster, from PTC. Although the ride was advertised as “not having a foot of straight track,” venerable designer John Allen remembered in 1978 that “the original ride turned out to be a dud!” Allen was brought in by the Gurtlers in 1965 to save Mr Twister, wherein he “improved on the original ride by taking the lift higher up to 98.6ft and adding a traditional straight coaster to it, and blending it into the curved ride.” Renamed merely “The Twister,” the ride was a hit the next year because, as Allen claimed, “curves don’t do anything for people.” Arguable, certainly, but John Allen’s famed out-and-back wood coasters were, after all, hits in the new family theme park industry throughout the 1970s, up to his final coaster in 1978. Elitch’s profited from his wisdom.

Elitch’s Gardens’ time-honoured slogan was “Not to see Elitch’s is not to see Denver,” and the Gurtler brothers were a powerhouse duo, as Elitch’s continued to grow until it was bursting at the seams by 1978. The park had become locked in by its location, and had to deal with neighbour issues. In the beginning, in a farming community west of town, there were no close neighbours, but as the surrounding area was split into lots, and homes built in the 1930s/40s, the new neighbours to the area had to deal with an amusement park next door. And the Gurtlers had to deal with those newcomers” complaints. Getting the original Mr Twister installed in 1964 wasn’t so bad, but when John Allen made the coaster higher and faster by adding two huge drops bordering West 36th Avenue, the neighbours rallied against the nightly roaring and screaming. Elitch’s Gardens may have been there before them, but the newer, higher Twister certainly wasn’t. As a result, the Gurtlers were forced to hang heavy sound-proof drapes down the scaffolding supporting the first two drops.

Parking was an even greater problem than disturbing the neighbours. Being land-locked, there was nothing available for off-site parking, so the west end of the property was strictly devoted to parking, and was often filled to capacity. With a parking lot that couldn’t be touched, and nowhere else to go, the Gurtler Brothers had to be inventive. They double-decked by installing a new dark ride over an existing arcade and food services building. But that wasn’t enough, and so they eyed the historical Trocadero Ballroom. 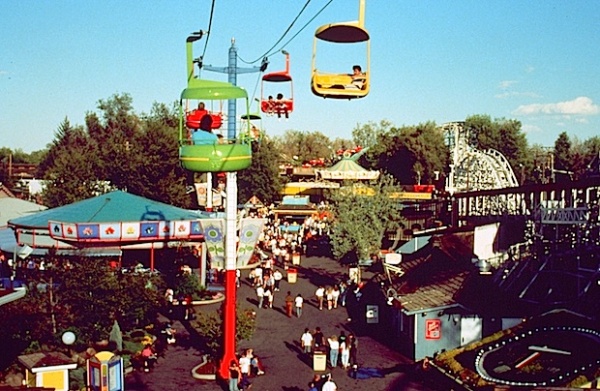 While the Elitch Theater continued to be financially sound, the “Troc” was no longer holding its own. The dance band era was long over, and the occasional booking of pop and rock stars and dance bands couldn’t justify the space that the ballroom occupied. In 1975 it was torn down, but rather than just add hard rides into the new vacancy, the Gurtlers wisely decided to use at least half of the space for landscaping, with new walkways, fountains and a miniature flowered Ferris Wheel. Visitors were reminded that Elitch’s was, after all, a garden.

However, the Gurtlers had to second-guess their decision to remove the Trocadero when disco exploded the very next year. “That was a mistake,” Jack Gurtler told me back in ’78. “We could be filling the Troc with disco-dancers right now! Shoot, the glass ceiling ball was still there, we could have added mirrors, spruced it up the sound system, and we’d have Disco Night at Elitch’s Gardens! The park would be overflowing!” Of course, by 1981 disco was all but dead, so it would have been a short reprieve for the venerable Trocadero Ballroom.

Elitch’s Gardens still had to grow, and it was running out of options. Its last major ride was in 1990, with the addition of the Arrow Launch Loop. The Gurtlers placed the steel coaster’s loading station at the southwest the corner of the park, extending its track along the edge of the parking. Due to the ride’s straight, eight-foot width, only a few parking spaces were lost, and thanks to the Arrow’s polyurethane wheels, the neighbours weren’t bothered by any new noise.

Even so, the hundred-year-old Elitch Gardens had a major decision to make. It had reached its space limits and could either stop growing, or move. The former is, of course, not an option in the amusement industry. Moving, however, had its own challenges beyond the cost. The Elitch Theater was a Denver tradition, and moving it from its original location was unthinkable to Denverites. Moreover, Mary Elitch herself had become a legend in Denver. During her time, she was known as the only woman in the world running an amusement park, and as such was a pioneer in the industry and a powerful role model for women..

But by the 1950s, another Denver woman would match Mary Elitch for her perseverance, strength, and pride in her own park. Rhoda Krasner’s Lakeside Amusement Park, a mere half mile away, was a stronger player in Denver’s tale of two parks than most people realised.

And the Gurtler Brothers knew it. 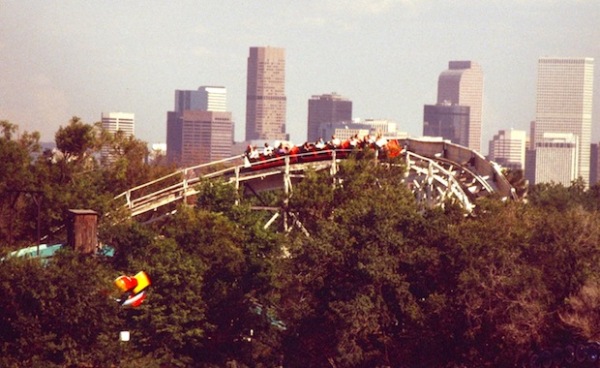