The ride is the latest project to be realised as part of Les Machines de l’ile, an artistic endeavour designed to breathe new life into the former shipyards of this city in North West France. Here, inside special workshops opposite the Jules Verne Museum, visitors can see a variety of weird and wonderful creations.

Opened this summer as a permanent outdoor attraction, Le Carousel Mondes des Marins has been under construction for the past five years, its progress undergoing scrutiny from curious callers to the Machines Gallery.

The completed construction stands almost 25-metres tall and features 35 strange creatures spread across three levels. Representing the ocean in all its states, from the seabed to the surface, only the top level is in the open-air or “above water”.

In the bowels of the attraction, visitors can discover such mechanical marine life as a giant crab, reverse propulsion squid, a diving machine or the Bathyscaphe, which climbs up the carousel’s central mast. Awaiting spectators on the second level are the deep-sea lantern fish, manta ray and pirate fish, plus three other creatures. On the surface of the sea can be found various jellyfish, flying fish, nut shells, a boat, all surrounded by 24 mechanical waves. 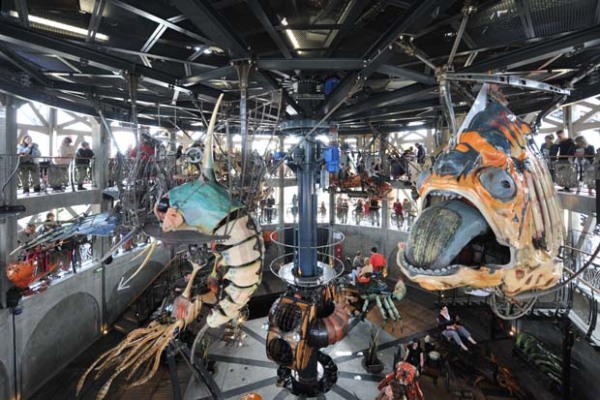 The very bottom of the carousel building houses the technical room, staff quarters, a room for hire and a small bar. Ferrying guests from here to the Machines Gallery is the Great Elephant, Les Machines de l’ile’s most famous creation to date (as seen below).

The new attraction, which opened to the public on July 15, features a total of 85 seats and can accommodate up to 300 passengers on its platforms. It is operated in “fairground mode” each weekend, Wednesday afternoon and throughout the school holidays. At other times it is open in “discovery mode” when visitors can look inside, with the aid of a guide, but not ride. Those simply wanting to walk the gangways around the outside of the attraction can do so for free. Access is also available to those with reduced mobility.

Les Machines de l’ile was founded by Pierre Orefice and François Delarozière and, as well as its intriguing exhibits down by the river (and occasional installation overseas), also stages various street theatre performances. Mondes des Marins is actually the fifth carousel created by the company – but by far its most ambitious. Architects on the project were Nicole Concordet and Christophe Theilmann. 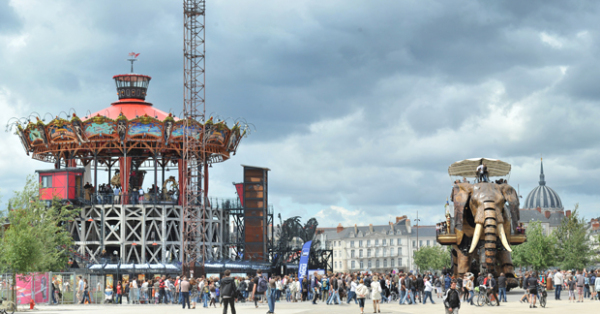