Ever since Royal Caribbean installed a FlowRider surf simulator on its ship Freedom of the Seas, the cruise industry has been steadily adding more and water recreation to its vessels. Forget a simple swimming pool, it’s now all about replicating the waterpark experience – at sea!

It all started back in 2005 when Royal Caribbean added rock climbing walls, mini-golf and ice-skating rinks to its cruise ships. A year later it launched Freedom of the Seas, with an onboard FlowRider and an “H2O Zone” aqua park. The race began.

My own company, JLC Hospitality Consulting, compiles a worldwide database of waterpark hotel/resorts open, under construction or in development, and we recorded a surge in waterpark features opening on cruise ships during 2009 and 2010.

In 2009, Carnival Cruise Line entered the market with its WaterWorks concept on itwo new ships, Ecstasy, based in Galveston, Texas, and Dream, at Port Canaveral in Florida. Royal Caribbean returned in December of last year with a second H2O Zone and two FlowRiders on Oasis of the Seas, its biggest ship yet.

Norwegian Cruise Line got in on the act this summer when it added a waterslide to each of four ships – Jewel, Jade, Pearl and Gem – and now Costa Cruises plans to add waterslides to seven more of its ships. Why? To attract the “bread and butter” family market during a tough economy. As the economy improves, people are starting to spend money on vacations again. That’s good news for the mostly-Florida based cruise industry.

By far the most anticipated new ship this year was Norwegian Cruise Line’s Epic, which was launched on July 10 and will sail year round from Miami for seven night tours of the Eastern and Western Caribbean. Introducing new features such as curved walls, lots of balconies, the Blue Man Group and 128 studios for singles at 100 square feet each, it’s an impressive vessel.

Aqua Park is the name of Epic’s expansive deck-top water play zone. The family-friendly area includes the only tube slide and largest bowl slide at sea – bound to be a big hit with the under-18 set. The tube slide twists and turns down three stories. The Epic Plunge, meanwhile, is a family raft ride that spins around the inside of a bowl and then drops 200ft into a splashdown lane. A third waterslide, designed for younger children, zips straight through the rock-climbing wall. Aqua Park has two main pools with arching water effects that are illuminated at night, five hot tubs, a wading pool and a kid’s pool with play toys, water sprays and a small slide.

For the active passenger, Epic offers the most sports and fitness options in the Norwegian fleet. Along with three waterslides, a traditional pool and fitness centre, the ship features batting cages, a climbing wall, rope rappelling, bowling alleys and a basketball court. 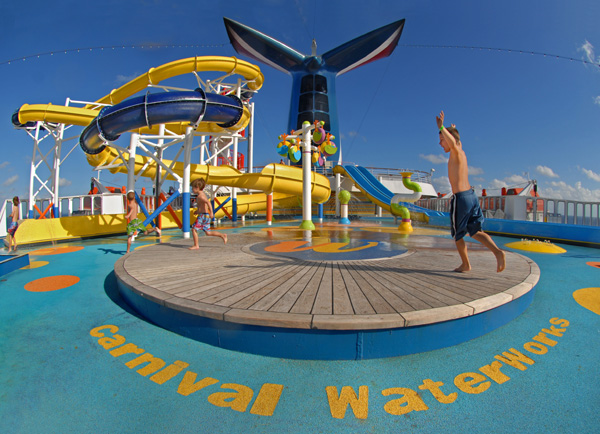 This coming January, the Disney Cruise Line will trump all competition when it launches the 2,500-passenger Disney Dream, including the 765ft long, 4-deck high AquaDuck water coaster. Sat inside two-person rafts, riders will be propelled by water jets on a high-speed ride through transparent tubes around the perimeter of the ship’s top deck. Among other attractions, Disney Dream will also feature 335ft of river rapids.

“Driven by land-based waterparks and their unique ride experiences, there is definitely a trend to go larger, faster, more exciting and more experiential,” says Andrew Mowatt of WhiteWater, the Canadian manufacturer that is supplying the AquaDuck. Other leading suppliers of waterpark attractions for the cruise industry include ProSlide and Wave Loch.

Resort owners, cruise line executives and families all love waterparks. In the mid 1990s, the outdoor waterpark came indoors and under cover. The hotel resort model has really exploded during the last decade, creating a network of land-based regional resort destinations that can command higher room rates thanks to added water recreation. Now the waterpark has gone outside again, and set sail for exotic locations around the world as an integral part of the cruise ship experience. With each new ship that is fitted with waterslides and rides, the offering becomes more and more like a land-based resort.

Author Jeff Coy is president of JLC Hospitality Consulting, certified by the International Society of Hospitality Consultants. Based in Arizona, JLCHC provides market research, economic feasibility and design-development services for all kinds of resorts, waterparks, adventure parks and sports facilities. 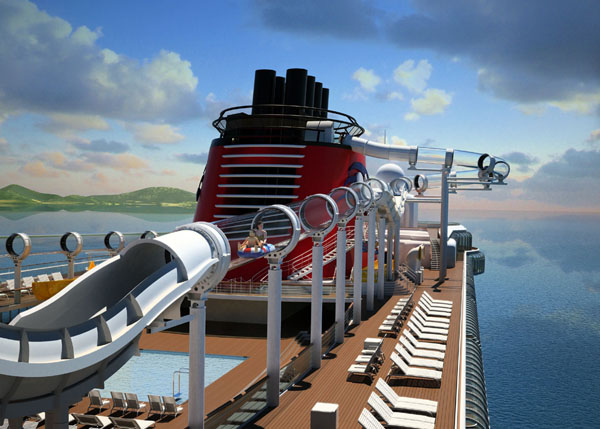