Cowabunga Bay is one of two new waterparks opening within the next six months in Las Vegas.

on the 23-acre, $23 million Cowabunga Bay as Vegas was due to start this December, ahead of a scheduled opening over the Memorial Day weekend in late May. Wet ‘n’ Wild Las Vegas, from the Australian operator Village Roadshow and various local investors, is set to open the same month. 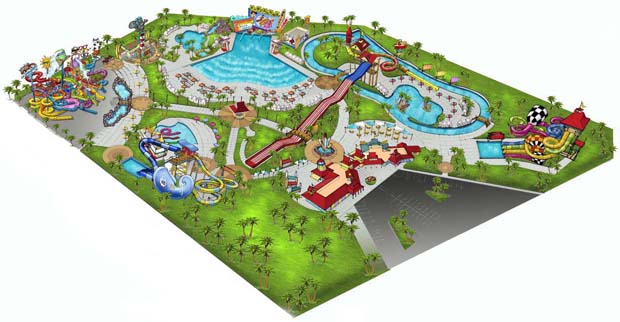 Located off I-95 and Galleria in Henderson, around 10 minutes from the south eastern end of the Las Vegas Strip, Cowabunga Bay Las Vegas will operate 120 days a year. The project is being developed by Huish Entertainment, operator of the existing Cowabunga Bay in Draper, Utah, together with local investors Ben and Marv Howell and Shawn Hassett. Huish’s firm also boasts waterpark experience in California, Washington and Oregon.

Selected as the supplier of the park’s slides and attractions is Polin Waterparks and Pool Systems, the project representing its first turnkey contract in the United States. Cowabunga Bay general manager Shane Huish tells Park World he and his partners chose Polin after visiting its factory in Turkey and a number of local waterparks kitted out by the firm.

Huish says there was one reason in particular he opted for the Turkish manufacturer. “We have a big problem with oxidisation on our slides in Utah, so I was very pleased when I learned about Polin’s Magic Shine moulding as it means they have a smooth finish on both sides. We’re very comfortable with their product.”

Cowabunga Bay Las Vegas will take its design and inspiration from the beach scene of the 1950s and ‘60s and be divided up into three surf-themed areas. Aloha Shores captures the a slice of Hawaii and will feature a children’s play area in addition to Surf Safari, Polin’s first Surf Safari slide (see panel). In Surf City USA, guests will be able to relive the beach parties of Frankie and Annette’s era. Here two of the waterpark’s biggest attractions will be located, a 35,000 sq ft wave pool by the Aquatic Development Group (ADG) and a six-storey water playground called Cowabunga Splash. Completing the offering will be The Boardwalk, featuring slides for all ages. 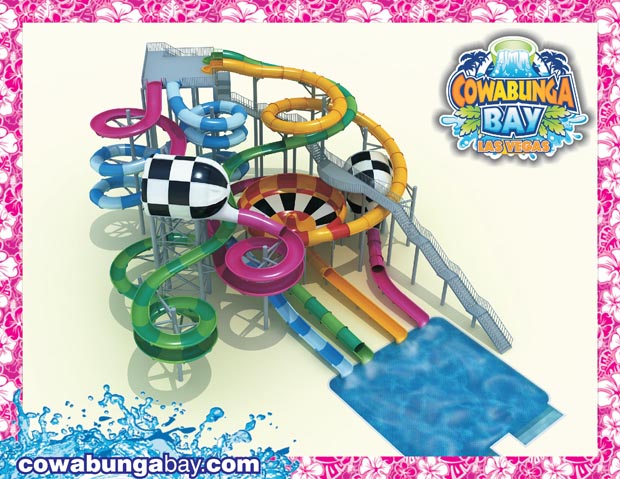 One of the Polin slide complexes planned for Cowabunga Bay

Ben Howell insists that the team behind the new park has got a winning formula: “This is a partnership that knows what the locals want and has the operational experience to make it a huge success,” he says.

“Not only does this park include all the elements of a world-class waterpark, but I wanted to capture the fun images of the beach,” adds Huish. “This unique themed experience is what will set us above others.”

Cowabunga Bay will also offers one other difference compared to Wet ‘n’ Wild: “We will be five dollars cheaper!” smiles Huish. 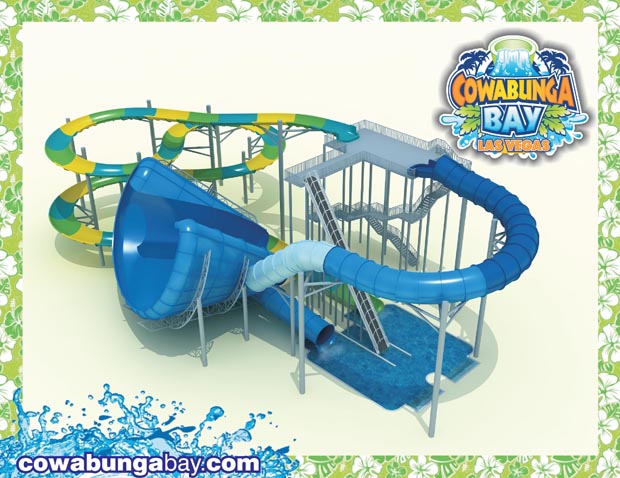 Cowabunga Bay Las Vegas will feature the world’s first Surf Safari from Polin. Going by the name of Wild Surf, the attraction takes the popular Tornado/funnel slide format and opens it up into a unique, parabolic design. Four-person rafts will speed through twists and turns, as the unexpected changes in momentum send hearts pounding before riders splash into pool or run-out exits.

The unique slide path gives riders a longer voyage compared to other slides with similar offerings, plus the added thrill of a water shower from the overhanging “lips” of the structure.

“It’s a combination of a proven idea with a creative twist and I like that you can see the riders in the funnel from the top of the slide tower,” notes Cowabunga Bay Las Vegas designer Shane Huish. “I also really like the way the water hits you in the face.”