Blackpool Pleasure Beach has revealed details of its first new rollercoaster for over a decade, and it’s a biggie. Opening in 2018, the £16.25 million ($21m/€19m) Construction MMXVIII (18) by Mack Rides will be the UK’s first double launch coaster, featuring well over 1km of track.

The landlocked British seaside amusement park, which enjoys a reputation as one of the world’s most “ride intensive” parks, has a habit of placing attractions over, under and alongside one another. The new rollercoaster continues that tradition, travelling across a large area of the park from near start of the Big Dipper right over to the Steeplechase, interacting with these and three further coasters a total of 15 times. During an experience lasting two minutes (or 161 seconds including loading), passengers in each of the three 16-seater trains will reach speeds of up to 80kmh/55mph as they run through a succession of elements including two inversions, travelling up to a maximum height of 88.5ft (27m). 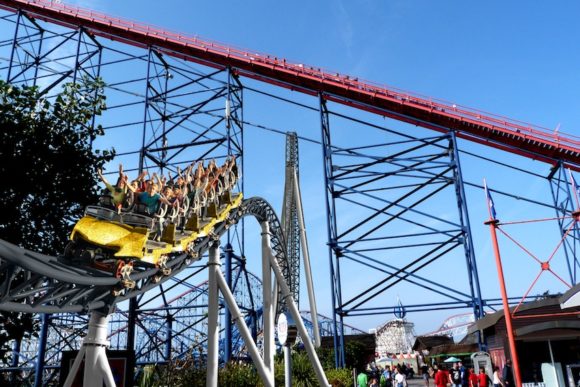 “We have been working on this concept for five years now and are delighted to be able share our plans,” says Blackpool Pleasure Beach deputy managing director, Nick Thompson. “Construction 2018 will be fast, adrenalin fuelled and exhilarating but also smooth and comfortable. We expect to see thrill-seekers flock to the park to experience this UK first.”

The multi-million attraction represents perhaps the pinnacle of a long professional relationship and friendship between the Thompson family in Blackpool and the Mack family, who as well as building rides famously operate Europa-Park near Freiburg. Between them the two families have more than 350 years’ history in the amusement industry. A team from the Pleasure Beach, together with a handful of selected media representatives, travelled to Germany recently to visit the Mack Rides factory in Waldkirch and then sample several attractions at Europa-Park including Blue Fire, which features a similar LSM launch system to Construction 18, albeit with just the one launch.

During the Blackpool Pleasure Beach press conference at Mack Rides HQ, Roland Mack commented that he was “very jealous of Blackpool for having a better rollercoaster than Europa-Park, but added that, “we are extremely proud to supply this fantastic theme park with such an impressive ride and are excited to open a new chapter in our common history of two great family companies. We are convinced that the Thompson family and the Pleasure Beach have a true winner on their hands and will create many happy faces with this new coaster.” 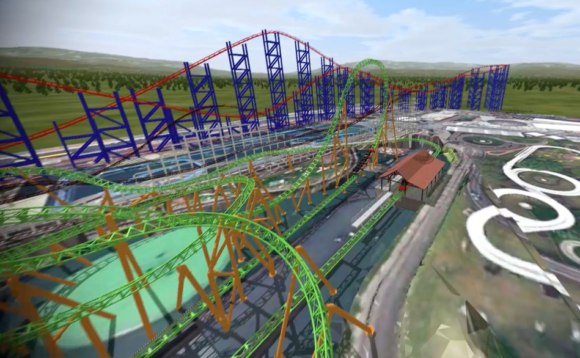 Construction 18 – the attraction’s working name – will feature a total of 1,144m of track, making it almost 200m longer than Blue Fire, but over 200m shorter than Helix at Liseberg (Gothenburg), another ride with which it shares several similarities. To plot the coaster’s course, and gain an accurate picture of surrounding attractions which were built long before the days of computer modelling, the park was 3D laser scanned.

Dennis Gordt, Mack Rides’ head of track development, describes the full layout: “We race out of the station and through the first LSM launch section – going from 0-80kmh/55mph with a maximum acceleration of -4.3G – and then heading directly after that into a top hat which is 27m (approx 85ft) and then we have very first interaction with Big One as we cross below the lift hill with a very tight clearance envelope. The next element is one of the most complicated because we have the inclined loop and cross over our own ride [Avalanche/Mack Boblsed]. After that we have banking which changes from 70 to 80°, an angle change of 150° at very high speed, and also we are passing two existing rides, the Big Dipper and Steeplechase, which the Pleasure Beach is doing some ground work on so that the ride can travel under it. This is followed by an S-bend section, which you pass through at 70kmh/45mph, then going back where we came from and passing again the Big Dipper and Steeplechase, then we have an interlocking zero G roll with inclined looping above the walkway of the park.

The next element will be the second launch, where we accelerate again to 85kmh, but this time the train is already moving. Then it’s straight into an Immelmann loop and after that very high banked turn (120°) followed by several airtime humps and a very high helix. After that there will be several more airtime humps and new key element, an outside banked airtime hump with approximately 30° banking to the wrong side, which gives a very crazy ride experience. It’s always important to have a good finale, so at the end we will have a ‘high five’ interaction with the Big Dipper, where riders on the two coasters can salute each other if the trains are passing at the right time. Then we hit the final brake before returning to the station. The average speed throughout the ride will be 60kmh (c.40mph); there will be no time to relax!”

Blackpool Pleasure Beach’s last new rollercoaster was Infusion, a Vekoma Suspended Looping Coaster that was given an extensive refurbishment after being removed from its former home of Pleasureland in Southport (once a sister park to Pleasure Beach). The last brand new coaster was the Big One, the Arrow-designed mega coaster introduced by the late Geoffrey Thompson in 1994 and which still serves as the park’s signature attraction and a local seaside landmark. 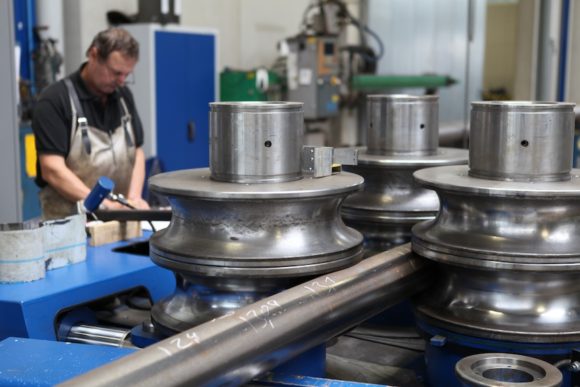 In adding a new coaster after all these years, the Thompsons had many choices, but for Nick Thompson a launch coaster was a no-brainer: “Having been on many launch coasters around the world and spoken to friends, colleagues and people on the park that have too, I believe they are one of the most exciting ride developments of recent times. The exhilaration of the launch – which will be the same as a that felt by the driver of a Formula 1 car or four times that experienced in a Lamborghini Gallardo – will be just so exciting and exhilarating. To have a double launch makes it even better.”

“This will actually be our second launch coaster,” adds Amanda Thompson OBE, Pleasure Beach managing director. “When we put in the Revolution [the UK’s first looping coaster] back in 1979 that was really taking things to the next level, but things have since got bigger and bigger and there are more exciting rides around the world. By working closely with Mack Rides and our own engineers we have been able to create something that will be our best ever, a really exciting, stimulating ride that will blow everyone’s mind when it opens.”

Set for a spring 2018 debut, construction on the new coaster is expected to start on site at Blackpool Pleasure Beach once the 2016 season comes to a close in November. Sign up for updates via blackpoolpleasurebeach.com/construction/

A separate story on the special relationship between the Mack and Thompson families will follow in an upcoming issue of Park World.